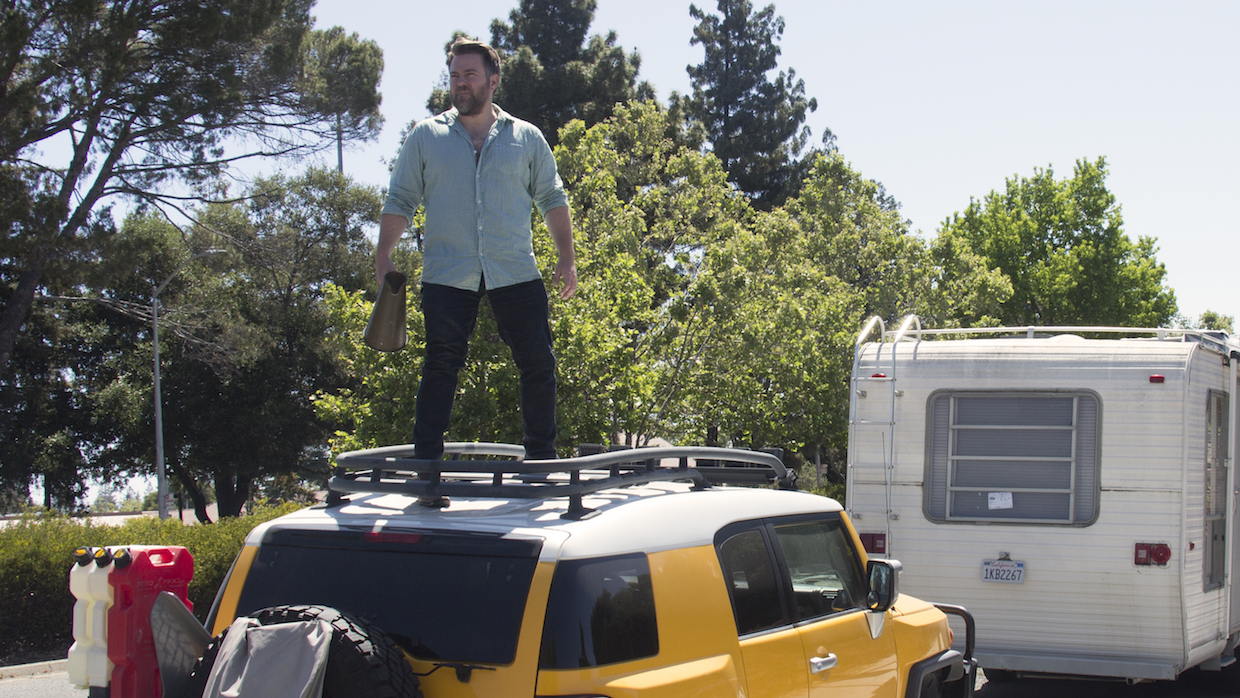 I was recently invited to edit a documentary about a Filipino guy who has had himself crucified—cross, nails, the whole bit—40 times since the mid-1980s. The footage is graceful and sinister: a rural community rallying around its celebrity heretic, rehearsing detailed scripts, whipping their withered Christ as he carries a cross through town every Good Friday. The interviews with friends and family are inspiring until you start feeling queasy. This project has languished since 2014. I told the Denmark-based director to get some new footage and described where the cameras should be placed, how the pounding of the nails should look, and how the screams should sound. In effect, I directed a crucifixion via e-mail.

You know how The Sopranos started? David Chase wanted to make something so gross that HBO would reject it so he could go make it as a feature film instead. He was tired of television after decades doing it. But HBO didn’t reject it: They embraced its excesses, and he was stuck in a contract to deliver a season. And now we embrace the excess because these are the templates. A practical joke, a dare, a goad, an attempted sabotage became a cultural revolution.

Obviously, I favor the joke/dare/goad/sabotage model.

My first feature, Around the Bay, premiered in spring 2008 and by fall 2009, my second film, Canary, was on the film festival circuit. I don’t mind that each of my films is treated as though it’s my first—that was certainly the mood around Canary. An industry review of my third film, Babnik, referred to it as my debut feature, too. This not only reflects the almost universal sense of discovery in those reviewing my films but also speaks to the lumpy naïvete of my work: I’m a perennial initiate.

Around the Bay is about a Silicon Valley businessman trying to cobble a family together out of disparate parts, and the film behaves in a similar manner, growing dizzy from its effort to cohere.Canary is a dystopian comedy about an organ-harvesting startup—if you don’t count the long, silent, contemplative passages or conversations in unsubtitled Vietnamese. Babnik is a sex-trafficking gangster picture that treats the genre with the contempt it deserves. And then there’s Amity: a tight-fisted character study with incendiary #metoo prescience.

Those are the four I’ve finished.

Picking up where I left off has been a bittersweet process. To mark the tenth anniversary of my first screening, my four completed films have just debuted on Amazon Streaming. I can’t say enough good things about the distributor I’ve been working with, Indie Rights. They have been “innovating in that space” for a decade. Their “knowflow” and “workhow” have made them a great option for filmmakers like you and me. When I noticed a 1992 shot-on-VHS Canadian flick on their label, I knew I was in the right place. Unrelenting egalitarianism.

I got my films into shape, bought some caption files, and sent off a hard drive with all the deliverables. They received it on a Friday and the films were on Amazon by Saturday night. Indie Rights is the most plainspoken outfit you can imagine. They know how to keep e-mail chains and tautological questions to a minimum; mandatory deliverables for all platforms are housed in a folder on Google Drive. If you have to ask a question that’s not covered there, you’re an idiot. YouTube, Google Play, Amazon, iTunes—they do it all. I wanted Amazon exclusively and they honored that, though it probably caves their bottom line (infinitesimally). They used my key art, my plot synopses, my idiosyncratic captions. We even debated social media campaigns until finally they were too exhausted to deal with me anymore. I could have put my films on Fandor, where at least they would have found the right audience, instead of Amazon where they’ll get the total-waste-of-time-avoid-avoid treatment.

They can handle it.

Now, the elephant in the room: Where have I been since 2012, my last iMDB credit? Abusing my talents, of course.

I edited “corporate video” for a guy who was creating a line of flavored sprays for vaginas to improve the cunnilingus experience for the performer. “Let’s just give that thing a zap of hazelnut spray before diving in.” He talked a lot about Michael Douglas alleging he got mouth cancer from eating out Catherine Zeta-Jones. Then, I was asked to teach in the California State University system and got headhunted from there by an MBA program where my colleagues are Stanford and Princeton PhDs—I’m the starving artist in jeans. But they lured me with the promise of a meritocracy in which I could build my own curriculum and franchise my brand. It’s almost hypnotically gratifying, working my voodoo on 300 millennials. I teach them Roger Corman, Issa Rae, Peter Bogdanovich’s Nickelodeon. One of them wrote a memo to Elaine May in the voice of a concerned studio head circa 1986. Then, I was asked to take over a distinguished screening series in Silicon Valley that’s been going for 22 years. Every screening is a secret, so no one knows what I’m showing. If you live in the Bay Area, please look me up and swing by some time, on my dime.

I’m working on a homelessness movie that will blow holes in the notion of Silicon Valley’s “progressive values” and altruism. Sure, we’ve got free computers in collapsing schools and and wi-fi balloons in developing nations, but how’s the PR when it comes to working-class people in your zip code being forced to live on the streets? The rusted-out RVs lining up on the streets of Palo Alto are a nascent horizontal version of the stacked trailers in Ready Player One. The principal and assistant principal at my kids’ school just quit their jobs simultaneously because they can’t afford to live here. I’m probably the only independent filmmaker living within a half mile of the Apple campus in Cupertino, where a two-bedroom house costs more than $2 million. I’m fortunate not to be living in a rusted-out RV. Yet.

In my 20s, I maintained a pattern of starting over again and again and again, in new towns or countries with new jobs, new friends. I’m now too old to be living that way, but if you establish the pattern it’s nearly impossible to break. My father set the trailer on fire when my infant self was in it and held my mother down in the yard. I have a cousin who died homeless on train tracks, uncles who went to jail for dealing drugs and used car scams (they even scammed each other), so I don’t know if wholesome contributions to society—or even settling down—are in the cards for me.

After my third film, Babnik, confused everyone in 2010, things changed remarkably. I had inadvertently positioned myself to receive anonymous tips and requests for aid. I’ll keep the details to a minimum because one of the projects I’m developing now is a Babnik series dramatizing many of these heart-rending first-hand accounts.

The mail-order brides found me first. Eventually, I donated $10,000 to a public access TV station around the corner from Google in Mountain View so they could upgrade their studio and I could televise a support group for Russian mail- order brides at all stages of their “experience.” Yes, I was walking a line between altruism and exploitation. Everything, including nudity, is permitted on public access television, so I wasn’t worried about it from that angle. But blurring the women’s faces wouldn’t be enough to protect them from recrimination.

The show concept came along in fits and starts until finally it became clear that the women considering participation faced danger not only from husbands they had escaped but from mob elements in the Bay Area. As depicted in my original Babnik film, some of these women relied on crime syndicates to extricate themselves from toxic marriages, and in a few cases the men who “ordered” them were subjected to repeated physical harm and intimidation tactics to break the cycle.

Were any of these mob elements tied to the tech industry? You betcha. Which of those universes do you think scares me more? As matters escalated, I was alarmed but mostly intrigued. And so I drove Uber for a year. So, what did I glean from those earnest Aussie startup honchos and dozens of others trapped in my roving confessional? The ins and outs of generic corruption, illegal dealmaking and competition squashing. Around-the-clock depravity and exploitation. Their utter reliance on the sex industry to lubricate deals at all times of day with total impunity.

Seeing the tech types in certain situations and hearing their accounts (both stoned and sober) made me wonder: How easy would it be to exploit any of these women without the framework of organized crime? It turns out loneliness and vulnerability make people behave irrationally and put themselves at considerable risk.

So, I’m breathlessly determined to pilfer my own IP and make a series out of my third film, Babnik. Eritrean goddesses, a Chinese NGO watchdog group, a university functionary denying student visa renewals, armies of entitled startup geeks, playful Russian goons—and I’ll continue to explore unsettling truths about the trafficking of males and the prominence of female masterminds in the trafficking rings, elements of my third feature that left many in disbelief.

For those who don’t believe any of this, look at the caffeine conspiracy theorist in Canary. He thought we were making an actual documentary. How much research do you think it took to find a crazy person capable of creating content and performing at that level? He believed I was part of the news crew within the movie and that we were making a whole movie around him. It’s OK. Someday, I’ll be the crazy person in your movie.