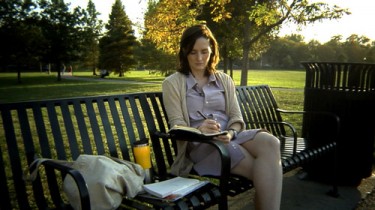 Continuing an extraordinarily prolific phase that has also encompassed his year-long subscription service, Joe Swanberg premieres his latest film, Caitlin Plays Herself, tonight at Brooklyn’s reRun theater. His new star is Caitlin Stainken, a member of the Neo-Futurists Theater Ensemble.

Here’s the description and a clip.

Making its North American debut, CAITLIN PLAYS HERSELF is the last in a trio of provocative, self-reflexive new dramas premiering at reRun this season from acclaimed auteur Joe Swanberg (SILVER BULLETS, ART HISTORY). Inspired by Eric Rohmer’s THE GREEN RAY and the life of lead actress Caitlin Stainken (a member of the “Neo-Futurists” experimental theater ensemble), the film screens for a week-long theatrical run from December 2 – 8.

Caitlin, a young Chicago artist, struggles to create work that is both personal and political. A piece she performs about the BP oil spill sends her relationship into a tailspin when her boyfriend can’t get over the fact that she was naked during the performance. Caitlin directs her energy toward sustainable living and a series of dates with other guys, but her on-again/off-again relationship with her boyfriend starts to resemble America’s relationship with the oil companies.

Co-starring Joe Swanberg, with fellow filmmakers Frank V. Ross (AUDREY THE TRAINWRECK) and Spencer Parsons (I’LL COME RUNNING), CAITLIN PLAYS HERSELF is a film about how difficult it is to save the world when you can’t even figure out your own life.