Here’s the fifth of our catch-ups with previous “25 New Faces” filmmakers. If you’ve been on the list and haven’t sent us an update, you can still email one to editor.filmmakermagazine AT gmail.com. 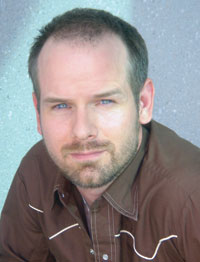 Don Handfield, writer/director, 2005: Life for me has changed dramatically for me since 2005, no pun intended. I am married now – to a beautiful woman named Tressa, and we had our first baby – a little girl – Robinson Dawn Handfield – just two weeks ago. She came in on the day of the recent earthquake and has been making her presence known with more little earthquakes every day since then. Wife and daughter have both been great teachers for me. My wife’s emotional intelligence is off the chart, and my daughter keeps me present. She’s a little Zen Buddha, in the moment at all times (when hungry, eat, when tired, sleep) and it’s a pretty special gift to be reminded of that. I used to pride myself on my workaholic ways, being the lone wolf, writing late into the night, working long hours, grinding it out so to speak. That’s not working for me anymore, especially not with a family. So I find myself working less from the filing cabinet (my brain) and more from the master control unit (my heart). Less time, and ultimately truer work.

As far as the feature I am directing – Jason Scott – I am set to shoot it first quarter of next year – 2009. A long road to get it made with many ups and downs in between. I connected with a great new set of producers, Mickey Barold and Stone Douglass, aka StickandStone. They put the project over the top and I am excited to finally be getting it going. I have tried to use the wait time wisely, workshopping the film over-and-over again. I’ve shot shorts or scene studies of my lead character in three different formats with three different actors.

I try to judge my progression in terms of personal and creative growth, rather than in business terms. But I can say that being in Filmmaker Magazine was definitely a boost for me, and led in one way or another to many great opportunities. I am currently finishing writing the romantic comedy Love Always for DreamWorks and wrapping up an adaptation of the nonfiction novel Fire on the Mountain for National Geographic Films.

The latter is an epic drama about one of the worst wildland firefighting disasters in modern history. I’ve put years of research into the script – on top of the half decade of intensive research and interviews done by the book’s author, John MacLean. Wildland firefighting is a world we see on the news a lot lately, but most people don’t really know much about it. This story gets inside it, and is really a war movie about firefighting, with a Black Hawk Down or United 93 feel to it. The Producer, Nick Osborne and I are glad it landed at the film division of National Geographic. Adam Liepzig and the people there seem to really care that the story is done right. They have research teams in D.C. that vet each draft for accuracy, which is good, because in this case, the truth is enough – no Hollywood embellishments necessary.

I went a little crazy during the writer’s strike – it was against every workaholic bone in my body to sit and do nothing, but my conscience won out and I did. For weeks. Then I found out halfway through the strike that web series were legal, so I took an idea, Driver’s Ed, that I had pitched a year before (that no one quite understood) and decided to just go shoot it myself as a web series. In my version, my lead character is a 60-year-old Iranian-American who owns a driving school in the Inland Empire. I say my version because when I presented the idea initially, I was told, Your lead can’t be foreign.” “Why not?” Because no one will watch it. “Really?” Yes. They’ve done studies. People want to watch themselves. Your lead has to be a white male. Thirties. Or you won’t get an audience. “Really? What about Sanford & Son? Chico and the Man? And all those great shows this 30-something white male grew up watching and loving?” Old shows. Times have changed. Okay. What do I know? So I changed my pitch to have a white lead in his thirties. It didn’t sell. It didn’t even get interest from a studio. So I shelved it. Then Borat came out. Foreign Lead. Comedy. The same type of fish-out-of-water skewed comedic perspective I envisioned for Driver’s Ed. Ugh.

It’s important to listen to people. Probably the most important skill you can develop to get ahead in this town. But sometimes you need to listen to your gut. Vision is seeing what other people don’t see. So don’t expect to share your vision and have people go Ahhh! I get it! It’s called vision because they don’t see it. And sometimes the only way to communicate it is to demonstrate. So I decided, the strike is on, let me put my money where my mouth is. Literally. My wife produced, her family pitched in to help, we shot down and dirty, on HD, for no money down in San Diego County, film school style. Tiny crew. No permits. We actually got the cops called on us by some 18-year-old kid. Go figure, all the 50-something parents were cool with us shooting in their neighborhood, this kid was some kind of police-geek-in-training and reported our fake police car for not having proper signage. My cop actor almost got arrested for felony impersonating a police officer! Luckily, they ended up getting off and they let us finish our shoot. In retrospect, it was amusing to see a cop writing another cop a ticket. We had some pretty amazing luck all around on that shoot. I was gassing up a picture car that still had a camera mount on it at a gas station and some guy ran up and asked me if we needed stuntmen. I was like “Stuntmen? Dude, we can’t afford PAs”. He scribbled down his name and number and told me to look him up on IMDB. I was up til 4 am transferring my P2 cards to hard disk (we couldn’t afford a camera assistant either) and I looked him up. He was a world class stuntman, one of the guys surfing through explosions in Apocolypse Now. Well, the next morning it rained so hard I had to change my shooting schedule and ended up with an extra DP and an empty picture car. A 1984 Caprice Classic I rented off of craigslist. I called the stunt coordinator (Kerry Rossall) who happened to be having a barbecue with a master mechanic and the Baja Rally champion at his house. They met us in a parking lot with about an hours notice and proceeded to absolutely destroy that station wagon. They made it do things I didn’t think that car could do – 360s, powerslides, reverse 180s – Smoky and the Bandit moves. It was awesome. The car came back to me a rattling, smoking hulk, but the footage was unbelievable. I of course, bought the car, I couldn’t return it like that. It raised the budget a little bit, but the production value we got from it was tenfold.

When the series was cut, I showed it to the Broken Lizard guys (Super Troopers, Beer Fest, Dukes of Hazzard) who responded strongly enough to take it into Lionsgate where they have a TV deal. The first and only studio we took it to made an offer and we pitch it to networks next week. So my web series hasn’t seen the web yet, but it might make TV. I will keep you posted.

Anyway, I didn’t mean to write a book. I don’t even know if I got this in to you in time. It took me a while because I am living in Baby Town right now, Population: No Sleep. Congratulations and good luck to all the 2008 New Faces. Don’t sit back and wait for people to come knocking, seize this opportunity. Publicity is currency in this town. Don’t blow it on your ego, spend it on your projects and parlay, parlay, parlay.