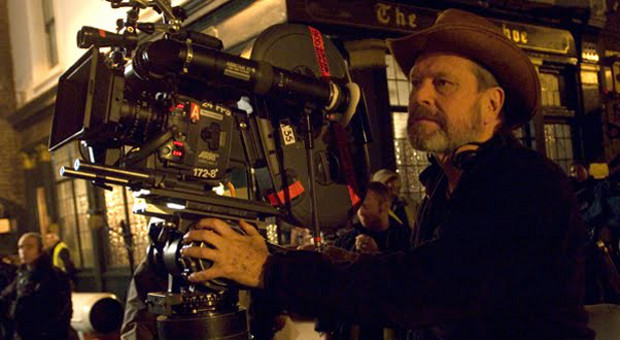 by Ariston Anderson
in Cinematography, Directing, Filmmaking
on Dec 19, 2011

“Billy Wilder once said that there are only two things aging directors can’t avoid…awards and haemorroids [sic]. I’ll stick with just the awards for the moment, please.” So says a recent Facebook post from the brain behind some of the greatest films of the last century, from Monty Python and the Holy Grail to Brazil to The Adventures of Baron Munchausen. Yes, Terry Gilliam has joined Facebook, as an experiment to promote his latest venture, the short film The Wholly Family, about Italian Pulcinella figurines coming to life inside a small boy’s imagination. (I highly recommend following his status updates). Fortunately for Gilliam, he’s on the awards path, recently honored with the Golden Star Award of the 11th Annual Marrakesh International Film Festival.

Wearing a Filipino-print shirt he purchased at his favorite craft shop in Los Angeles, and socks covered with cows sporting sunglasses, Gilliam showed up the night after his award ceremony to the Palais des Congrès to teach a Master Class to an audience full of Moroccan film students. When asked why he films, Gilliam responded with a long pause and then said into the microphone, “I suppose it’s the best job out there.” For Gilliam, film is the one medium that combines every art form he loves. I caught up with Gilliam for a short chat before his master class. Here, in his words from both our talk and the class, are the combined lessons, or anti-lessons, he has to offer from his long and rich career in the world’s greatest profession.

1. Growing up is for losers.

As a child, I always drew funny creatures, funny characters. But I think the trick is not to grow up, not to learn to be an adult. And if you can maintain the kind of imagination you all had when you were babies, you would all be wonderful filmmakers. But the world tries to make you grow up, to stop imagining, stop fantasizing, stop playing in your mind. And I’ve worked hard to not let the world educate me.

2. Film school is for fools.

Live and learn how to make films. I didn’t go to film school. I just watched movies in the cinemas. And probably my greater education was actually making films, so that’s all I would ever say: watch movies, get a camera, make a movie. And if you do it enough times, eventually you start learning how films are made.

Being an auteur is what we all dreamed of being, as far [back] as the films of the late ‘50s and ‘60s, when the idea of the auteur filmmaker arrived on the planet. And people kept using that term, and they do with my movies because I suppose they are very individual and they give me all the credit, so they say I’m an auteur. And I say no, the reality is I’m a ‘fil-teur.’ I know what I’m trying to make but I have a lot of people who are around me who are my friends and don’t take orders and don’t listen to me, but who have individual ideas. And when they come up with a good idea, if it’s one that fits what I’m trying to do, I use it. So the end film is a collaboration of a lot of people, and I’m the filter who decides what goes in and what stays out.

4. Put your ideas in a drawer. Take them out as needed.

I do have a drawer in my desk with all the ideas that I have and that I scribbled out. I put them in there and some day I use them. At the beginning of a new film, I often go in that drawer and look at everything I’ve done and see if there are some ideas that might apply to what I’m doing. But things grow, so I just start with a sketch and then refine it. And you do it with other people’s ideas coming in. That’s the fun part.

5. All you’ve really got in life is story.

I think the important thing is stay true to what you believe. I mean it’s much more important to make your mistakes than somebody else’s mistakes. Like too many other filmmakers have compromised because somebody advised them [that] if you change this, the film will be more successful commercially. And then the film isn’t successful commercially, and these people get so depressed and destroyed because they didn’t ever finish making their film the way they intended it. You’ve got to believe in what you’re doing. And you’ve got to be willing to take the consequences of whatever it is. If you succeed, fantastic. If you fail, you might have to get a proper job.

6. Command the audience with your lens.

I keep wanting to see more of the world always. When I’m looking through the camera, when we’re setting up a scene, I don’t feel like I’m in the scene. And the wide angle lens, because we see so much, it seems to wrap around me a little bit. I also like the fact that with long lenses, the director controls the audience much more because you show the audience only exactly what you want. Everything else can be out of focus. And I like it to be a little bit more vague so the audience has to be aware of the environment as well as what I want them to look at. I don’t want to really separate the character from the world that it’s in. So the world is as important, and the rooms and everything, as the character sometimes.

7. Nothing can defeat a director who is one with his actors.

I think the key is to make sure that the cast, especially if they’re big Hollywood superstars, likes the movie. My first film in Hollywood was The Fischer King, and Robin Williams and Jeff Bridges are playing the two leads. And I knew as long as Robin, Jeff and I were united, there was no way the studio could break it, and the film would go out. Same way with Twelve Monkeys. Brad Pitt, Bruce Willis and I were one. In both instances those films went very smoothly.

8. Surround yourself with improvisers.

I like the actor to surprise me all the time because the problem when you’re making a film, if you’ve written it and you’re directing it, you’ve been with it so long, it becomes a bit rigid. It can become mechanical when you’re shooting because you’re just trying to do exactly what you were thinking about for the last year. And what’s wonderful is when the actors come in and they do something that’s completely surprising, and suddenly every day becomes fresh. And it makes me stay awake.

9. Directing is not for the faint-of-heart. Or the sane.

What I love about Don Quixote is that he keeps misinterpreting the world. He thinks the world is either worse or better or whatever. He gets it wrong every time. But in the end he has these heroic, epic moments, and he seems to be unstoppable. He just goes on and on and on. I think it’s a great example for people, especially in film, in how to get through life, because film can often be incredibly disappointing. What I like about the Don Quixote documentary is that so many other filmmakers when they saw that, they started telling me their stories of equally horrible disasters. It’s a very difficult business. [Lost in La Mancha] should discourage anyone who is not willing to live in a world where disasters like that occur. Don’t make films if you’re not going to be able to deal with things like that.

I’m always working on it and one day it will happen. It’s changed me. If you’re going to make a film about Don Quixote, you’ve got to be as mad as Don Quixote, so the nature is helping me go crazy.

10. Be an enlightened despot.

I expect the actors to really be totally committed to the film and to their character and forget about who they are. Get rid of your vanity. Just be whatever the character demands. I think it’s horrible when I hear stories of actors coming and they bring their own makeup people and their hairdresser. Wait a minute, what’s going on here? The power is in the wrong hands. And if you let the power go to the actor, then you’re not directing the movie. And the actor is not thinking about the entire movie. Only the director is thinking about the entire movie.

I don’t ever want to be the guy that is saying, “this is the only way that it can be done.” I don’t want to be a dictator. That’s not interesting. It’s interesting if you can have a dialogue going all the time and trying to all agree to find what is the best way for this film to go.

Bonus Lesson: And whatever you do, don’t ever work with the Weinsteins.

I suppose it would have been nice to have made more films in the 71 years that I’ve been hanging around this place. And if I have a regret, there’s only one really, and that was working with the Weinsteins [giggles]. That’s the only one.