THE WINDMILL MOVIE ON HBO TONIGHT 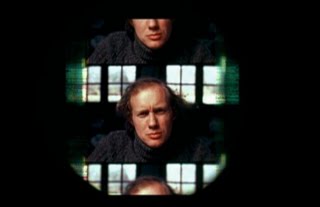 We here at Filmmaker have been big fans of Alexander Olch‘s experimental memoir/documentary The Windmill Movie since seeing it at the New York Film Festival in ’08. If you missed it in theaters over the summer it will premiere on HBO2 tonight @ 8pm.

For those who don’t know about it, the film is about the 300 hours of autobiographical footage left behind by filmmaker/professor Richard P. Rogers after his death in 2001. Olch (who was a student of Rogers’s) was calling in to look over the footage and finish the film his mentor never could. What he delivers is a fascinating essay filled with Rogers’s footage (including beautiful landscapes of the Hamptons), audio recordings, actors like Wallace Shawn playing Rogers, and Olch’s narration.

Scott Macaulay interviewed Olch for the Spring ’09 issue. Here’s an excerpt from it.

Was the conceit of you making his autobiographical film there from the beginning? Or was it originally more of a third-person portrait? I was not particularly interested in just executing somebody else’s idea. What was actually compelling about the project was that there was this mix of elements in it. It was a story about a guy who’s trying to figure out how to make this movie that in some ways is about how he can’t figure out how to make the movie. And so I’m them constructing a story that really had very little to do with the material that he left. I mean, some of the tricky parts of producing their project [involved] negotiating the fact that I was really kind of dancing around the edges of what you probably would think were his intentions if you looked at the footage. His plan was definitely geared much more toward a piece about the community, about his history in Georgica, in the Hamptons, and was not very much concerned with his process of making a film. However he did not finish it, and he left behind some very key interviews with friends where he talked about the film and said, “Well, the only way I could make it is if I make it much more about myself. But I’m just not prepared to do that.” And so in some way the Gordian knot that had to be untied was: How do you actually get him to be present in this movie when he avoided that so much — whether by shooting landscapes or other people, or shooting his mother, or shooting anything but himself? There was just this giant missing hole in the center of the movie. For a time I thought maybe Susan [Meiselas] could fill that spot as a sort of narrator or host through his story. There was a time when I thought I would fill that spot, telling the adventures of me as a young filmmaker piecing together these pieces. There was a time where I thought Wally [Shawn] would be sort of the star; he would take over and kind of just become Dick. But none of those plans really worked. And so the eventual result is a bit of a mix of all of those three strategies, with the key aesthetic realization being that you couldn’t really take the movie away from Dick, that he had to be the center of the movie. The trick became how to inject these elements, which were needed to fill up the center, without actually feeling like you had taken the focus off of him. The subtlety is that, yes, I do make you feel like he’s making his movie. But that is actually an invention. That’s part of the conceit. I’m in a way creating that story for you to hear.

I didn’t know Dick, but after watching your film I felt that he never would have finished his movie. It seemed like one of those lifelong and ultimately quixotic ambitions. Having spent so much time with the footage, yes, I agree. He left a 90-second piece of voiceover, which is in the film, where he talks about his father making Super 8 films. It’s the only thing he left behind that showed any kind of direction toward synthesizing the material in a personal way. And that voice is when he’s already sick. Part of me is tempted to think: “Well, maybe at the very end he did see how to synthesize this in his own first person and tell a story with voiceover like his colleague Ross McElwee” We don’t know. But I certainly have to take responsibility — any sense you get that his journey was quixotic was written by me. And yet there’s sort of a Russian doll kind of dynamic to it. Those words are written by me, in his spirit, but it’s certainly my creative interpretation of telling a story about him.

In any documentary what you leave out is much a choice as what you leave in. So perhaps what’s on the cutting-room floor would have given me a different impression of him. Were there, in fact, multiple “Dick Rogers” there are not in this film? Well, Dick’s friend Robert Benton, who lives in Georgica, said something to me that I’ll always remember. “In many ways when you write the most important end of your pencil is the eraser.” And it proved to be so true because I was starting out with so much. I wasn’t wrestling with 300 hours of crowded pages. In terms of the facets, the sides, of Dick, I tried my best to include as many of them as possible because that makes him a complex, interesting and contradictory person. There were a lot of questions as to what the balance would be [between] his intellectual [side], how confident he was, and how charming he was in real life versus his anxieties about himself and his relationships with women. Aside from the footage, my sources for information were his widow, other women that he had dates, and his friends. There was no “impartial record” of his life I could go consult. “The movie should really be like this, Alex,” was something that a lot of people would essentially be saying when I would ask them about things.

You can read the full interview by subscribing to our digital issue.

We highly recommend checking out the film.

Here’s the theatrical trailer to wet your appetite.