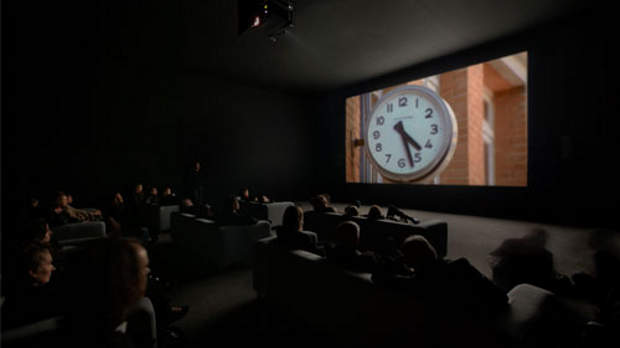 Christian Marclay’s The Clock returns to New York beginning tomorrow, July 13, through August 1 at the David Rubenstein Atrium at Lincoln Center. For details click here, and note that on the weekends the installation will run 24 hours. At special Twitter account, @LCClock, will post wait times. The following piece appeared in our Fall, 2011 issue.

Christian Marclay’s The Clock video installation is many things. Structurally it is a 24-hour video installation in which film clips from across the history of cinema are meticulously edited together so that the fictional time inside each clip matches exactly the time at which you are watching it. Culturally, The Clock is an art-world sensation. When it ran last year for several 48-hour stretches at the Paula Cooper Gallery in New York, visitors waited in long lines in the cold weather for the chance to watch part of it. Die-hard fans skipped the lines by coming in the middle of the night, curling up on gallery’s viewing sofas in hopes of taking in all 24 hours. Cinematically, The Clock is a tour de force exploration of how time – or more precisely timepieces (wristwatches, grandfather clocks, pocket watches, alarm clocks, sun dials, TV banners, radio updates, blinking microwave LEDs, and the like) – structure film narrative. And at the most practical level The Clock is just that – a clock. If you were to remount the show in your kitchen, you need only glance over to see Susan Hayward being executed in I Want to Live to know that it is 11:36 AM, a warning that you better hurry up or you’ll be late for your lunch meeting. 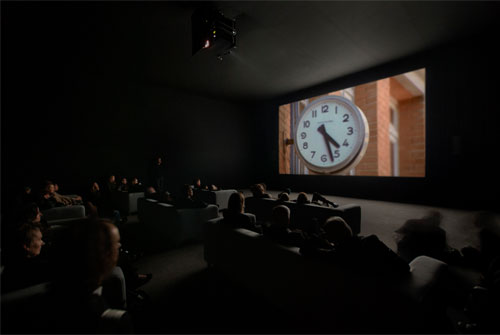 The Swiss-American artist Christian Marclay started his artistic career in the late ’70s working in sculpture as well as the emerging field of turntablism. As a musician, Marclay collaborated with the likes of John Zorn, Elliott Sharp, Christian Wolff, Butch Morris, Arto Lindsay, and Sonic Youth. As an artist, he uses collage techniques to explore what music means. Marclay transformed physical representations of music (album covers, cassette tapes, record players, posters, etc) into strange, witty, and often beautiful sculptural pieces. At the same time, he used the structure of music to rethink film language. His 2002 15-minute Video Quartet uses four screens, each playing a different montage from films about musical performance, to orchestrate a sort of video chamber suite. His 1995 Telephones sampled clips of people answering, talking on and hanging up telephones so as to create one very long party line.

In The Clock, Marclay extends his exploration of time-based media to time itself. Marclay told The New York Observer, “Time is at the center of everything we do. As much as it is an artificial construct — in some ways it’s pretty abstract — it is a reality that we all synch to, and we conduct our lives to that rhythm.” Indeed in many ways The Clock is less concerned with the metaphysics of time as with its grammar, the universally recognized laws that regulate its passage.

Marclay first hit upon the work’s concept in 2005, but he didn’t start in earnest until two-and-half-years ago, when he directed a small team of assistants to cull though the history of cinema (that is to say, their very long Netflix queues) for cameos of clocks or other time-telling devices. Working on Final Cut Pro, Marclay painstaking assembled the clips delivered to him, often kicking a clip from one time slot if a better one came along. According to Marclay, “My job was to edit, that’s what I did all day,” On a technical level that meant standardizing the various formats, from standard black & white 4×3 to color CinemaScope. More importantly it meant smoothing out the sound mix so that the piece flowed seamlessly, often using dialogue or sound from one clip to bridge into another. The overall effect was to reinforce the sense of a unified movie-universe out there, a world perhaps separated by history, genre or even technical specs, but governed by the a single law of time.

As a piece of entertainment, The Clock provides a wildly amusing ride through cinema history, sometimes testing your knowledge of film trivia, and at other times resurfacing a long buried movie memory. Marclay often plays with our common film knowledge, revisiting a single film, building up tension by constantly returning to watch the clock hand. Montgomery Clift and Jennifer Jones repeatedly appear waiting for the 8:30 AM train that will separate them forever in Indiscretion of an American Wife. But Marclay also defies those expectations. High Noon, for example, appears only at noon, despite the film’s obsessive counting down to its titular showdown. As one watches The Clock, one becomes sensitive to the common rhythms of life — waking up, getting to work, eating lunch, going to sleep, dreaming — as well as the movie events that demand clock watching — airport check in, train departures, blind dates, hidden bombs. Even more remarkable is how you soon discover the hidden drama of time-telling itself, how certain emotions coalesce around certain times of the hour, be they the mounting sense of anticipation, hope, excitement that stirs in the minutes before the hour and half-hour, or the depleted sense of sadness or regret that permeate the seconds after the hour. Soon you begin to suspect that every second has a story to tell, one that is revealed only in its many appearances throughout the history of film.