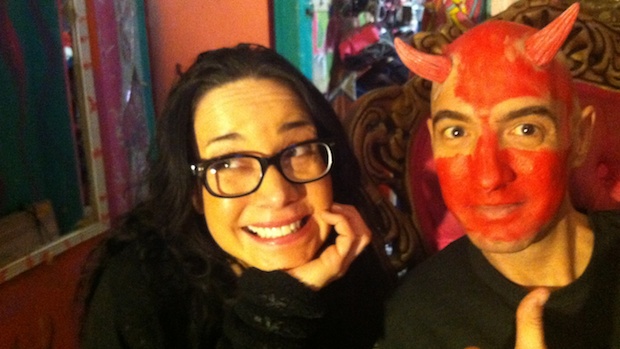 Janeane Garofalo and Faceboy in "Satan, Hold My Hand."

by Courtney Sell
in Directing, Filmmaking, Production
on Feb 21, 2013

Is it weird that I get excited when I spot a boom mic in a film? Is it strange that I feel a huge rush of excitement when I notice that cameraman’s reflection in a scene? When an actor fumbles his lines or when I catch an extra staring directly at the camera during a shot makes me feel warm and fuzzy on the inside? These moments are usually not intended by the filmmakers, but it is heartwarming to capture such mistakes on celluloid. Which brings me to my point. Don’t hide your flaws! This is the true magic of cinema!

Let me digress a bit. My love for cinematic fuck-ups has become an obsession. When it came down to running my own film festival, ASSdance Film Festival, we gave out such awards as “Best Overacting Female,” “Most Visible Boom Mic,” “Most Annoying Soundtrack,” and even “This Film Would Be So Much Better on LSD” award. Oddly enough, the filmmakers were thrilled! Embracing the mistakes is so much better than criticizing them. Mistakes show heart. They show passion. They present the viewer with a moment of absolute reality, even in the most surrealistic environment. There is more heart in an Ed Wood film than in some of the higher budget pictures I’ve seen in a while.

Needless to say, I love camp. When the filmmakers themselves know and embrace their mistakes, poke fun at their cheapness and have a laugh at themselves, I believe, is when the real magic happens. As a fellow no-budget filmmaker, it would be hard for me to make any of my work appear to be a Hollywood epic. So I don’t. When people ask me why I don’t upgrade my equipment, I simply tell them I don’t want too. When they look at me like I’m insane, I explain my reason.

I’ve tried many times, over and over again, to hide my mistakes in my earlier work. Whether I color correct the footage to make it seem more, uh, “professional” looking or use cheesy set decorations to make it look like I actually have a budget, it never works. Instead, everything comes out looking like a ’90s softcore porn. When I made movies in high school, I was torn apart by my student colleagues. My films were called every horrible thing a film could be called. And to be honest, I probably deserved such public disgrace. The films were actually bad. Luckily, I was only in high school and had enough time to swallow my pride, take a deep breath and understand that there was no point in making something appear different than what it is.

Now, after ten years of continuously and tirelessly shooting no-budget films, documentaries, music videos, and narratives alike, I feel proud to create work that is exactly what it is. I still work on my Hi8 video camera because it makes me comfortable, and I know exactly how the footage will turn out. When people watch how I shoot films, they are most likely terrified by the absolute lack of professional equipment, money and sometimes even crew. However, I am able to twist and turn the rough footage into a final cut that I am happy about. And hopefully, the audience as well. Though that one is hit or miss unfortunately.

Now in the midst of shooting my first feature, a horror film called Satan, Hold My Hand, I realized that it will be exactly what I and the people who know my work will expect. Low production quality, camp value, and filled with heart. Why lie to myself? I believe that showing your flaws, and mine being no money or equipment, is an important step for a filmmaker and sure as hell beats spending a million dollars shooting a glossy piece of shit. Now I am not saying my work is bad, in fact, I am incredibly proud of everything I have done, but understand that because it is so beyond what one could even consider independent, it will be judged harshly. And that’s O.K.! Let them point out the boom mics, the sound mix-ups, the cheap costumes, makeup and props. It makes watching a film all the better!