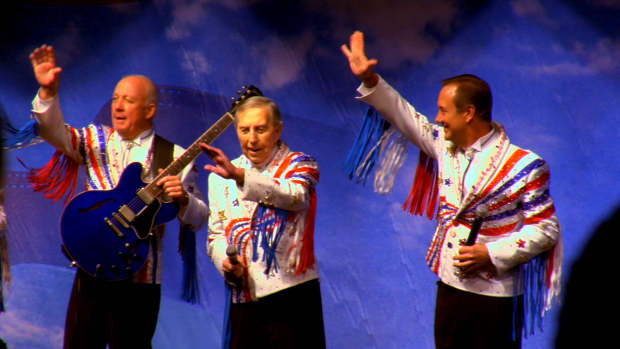 Tucked away in the middle of the Ozarks, far away from the bright lights of the coasts, lies Branson, Missouri, a place that has been dubbed “the live music capital of America.” The opposite of hip, its theaters feature a wide variety of traditional family entertainers such as the comedian Yakov Smirnoff and the singer Andy Williams who are neither gone nor forgotten by the 7.5 million tourists who visit each year. It’s the type of place where a lively game of bumper boats might be followed by a dinner and a rodeo show at the Dixie Stampede Theater. Five years in the making, We Always Lie to Strangers follows four families who make their lives and livelihoods in this living, breathing, middle American entertainment industrial complex.

Filmmaker: Why Branson? Of all the tourist towns in America, why did you pick this one?

Wilson: We both grew up with a hazy vision of Branson as a family vacation destination with steamboat rides and rope bridges and go-karts. Later, our sense of Branson shifted to the rhinestones and neon and that particular flavor of American nostalgia that became the Branson brand in the 90s. But we also knew, on some level, that there had to be much more beneath the surface. And so when we met, and started to talk about what those depths might reveal, we knew that this was a town that deserved a film and that we wanted to make it together.

Schnack: David had made some short films about sub-cultures in small town Missouri that I liked a lot and when he asked me if I wanted to make this Branson film with him, I’d just come off of doing Kurt Cobain: About a Son, which was deeply rooted in a sense of identity and a sense of place. The idea of going back to the Midwest to make something about the Ozarks seemed really promising.

Filmmaker: How did you go about finding the four families you covered? Did you start out thinking you might cover more than four?

Schnack: There was a time when we were open to thinking that the film could be a series of vignettes featuring maybe 20 different Branson residents from all walks of life, and for the first few months that we were there, we probably were filming with at least that many. At some point we realized that the families that are in the finished film had full narratives, whereas some of the others that we’d met, as great as they were or wonderful as their stories were, would be hard to include in this kind of an ensemble piece.

Wilson: Most of that first summer was spent just getting to know the town. We would literally wake up every day and go out shooting. We’d meet people, ask them about their lives, they’d introduce us to their friends, etc.

Schnack: And we saw as many Branson shows as we were able.

Filmmaker: I think your title is fantastic. What’s it origin?

Wilson: Vance Randolph was a musicologist and folklorist who collected stories and wrote books about the Ozarks. Sometimes Randolph would observe the good ol’ boys outside the country store who would let their stories get a little less believable and a little louder whenever a “ferner” (someone from the big city) came by. When he asked them about this, they said, “We always lie to strangers.”  He ended up using that name for one of his collections of folktales.

Schnack: The more we thought about the title, the more we recognized how relevant it was to this story about performers, particularly where what’s beneath the surface is more complicated and interesting than the stereotype might lead you to believe.

Wilson: Branson has been a place that’s sold a version of itself to tourists for over a hundred years. Lots has changed, but that hasn’t.

Filmmaker: The music of Branson seems such an integral part of the story. How did you incorporate it into your storytelling?

Wilson: Well, continuing on that idea of subcultures, music is often the clearest expression of regional difference. In Branson, you have an incredibly rich specific indigenous musical tradition, and then a newer, more diverse tradition (the “Nashville exodus”) that’s been mapped onto it. We knew pretty early on that it was important to represent this whole spectrum, but it took us a while to figure out how.

Schnack: Music and performing is what these people do, so it can’t help but be the backdrop to their stories. They love being onstage, they love performing with their families, it ends up being less about the songs themselves but rather about the joy they take in getting to do this for a living.

Filmmaker: How intimately involved with your subject’s lives were you? Have they seen the finished product, and if so, what was their reaction?

Schnack: I think any time you are going to spend years with subjects, continually coming back and checking in with them, you’re developing a relationship that has to honor their contribution to the artistic process of making the film. They had to invest a lot of trust in us, and at various points over the years, I’m sure they had their doubts about our motivations. Plenty of people go to Branson just to make fun of it. They were generous to participate so completely not being 100 percent sure what the Branson of our film would look like or how they’d come across.

Wilson: And certainly, when you hang around as long as we did, you’re there to witness a lot of life moments, both happy and sad. Showing the film to our subjects was one of the most nerve-wracking moments of our lives. We knew it wasn’t a totally glossy portrait of Branson, but we felt like we’d been honest to what we observed. Luckily, they all understood that.

Schnack: These past few weeks it’s been exciting to be in this finishing stage where now they can see what we go through to complete a film and take it audiences for the first time.