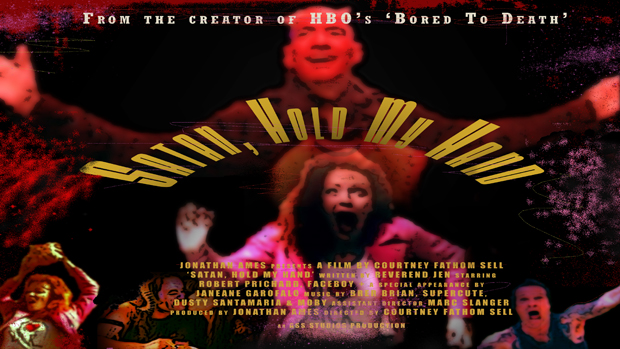 by Courtney Sell
in Filmmaking, Production
on Aug 29, 2013

From the very start, it seemed that people believed in the project. The screenplay received positive feedback from everyone who read it, the cast was set and eager to begin shooting, and handfuls of friends offered to jump in as the crew. Since we’ve never worked on a budget before, and have been able to turn out schlock-titles such as The Sinful Bitches and Killer Unicorn successfully, we should keep costs low and in our ballpark. Somewhere in the rough estimation of $400, which would include wardrobe, equipment costs, and maybe even enough for booze at the end of each shoot. It was my first feature, a horror film called Satan, Hold My Hand, penned by my girlfriend and artist Reverend Jen, centered around a group of stoner Satanists seeking victims for the “ultimate sacrifice.” We came up with the idea on our first date, a stroll around our neighborhood of the Lower East Side, winning money on a scratch ticket and blowing it all on booze. I’ve always wanted to do a throwback ’80s horror film, utilizing all of the main cheesy ingredients that helped make those films so fun and luckily, Jen saw the same vision. While I continued to edit our shorts, she began putting pen to paper and pumped out a hilarious screenplay entitled Half-Assed Satanists. The title then changed to Satan’s Bitches and eventually to Satan, Hold My Hand, which I felt may be a bit less harsh and allow us into the festival circuit easier. What a sell-out right? Much to our surprise, or not, we couldn’t even reach our tiny financial goal on Kickstarter and I began saving up the pennies collected by working as a cook in order to get things off the ground. Needless to say, the production was already a disaster. Our rent hadn’t even been paid yet. My pennies were still pennies; not a pot of gold like I had imagined.

Beautiful latex make-up turned into 99-cent halloween supplies. Our vision of shooting on HD quickly melted away into my familiar world of Hi8. Our glorious craft services and catering station, now simply a few 99-cent slices and a case of beer. What once was thought of being our first “big production” would turn out to be nothing more than an average, run-of-the-mill never-realized film. Back to the kitchen I went!

For a while, I honestly hated the thought of the film. It made me sick to even think about such a gigantic undertaking. I loved the screenplay and the idea, but the efforts which would undoubtedly be needed in order to get the project moving were nothing but depressing for me to consider. As time passed, something changed in me. While I like to consider it a Fitzcaraldo-like moment in my own mind, I decided to go ahead and start the film. Perhaps I was becoming annoyed at wasting my time cooking when all I wanted to be doing was filming. Yet, I was simply loading a Hi8 tape into a broken camera upon this realization – not pulling a steamship over a mountain. It seemed the same to me however.

A day before the first shoot, my camera decided to kick the bucket. My trusty Hi8, which I’ve made a mission of promoting as my “thing,” 10 years in the making, was finally gone. After a few salty tears, I tried my hardest to locate a new one. Nothing. The cast was ready, memorizing their lines, going through the motions, and here I was, a director without a camera. I drank myself through the night, like most, until waking up hungover to a message that a friend would loan her miniDV out to me. There is a God! or so I thought.

After the first day of shooting, she decided to take it back. Guess the rent-man had decided to pay her a visit as well and the twenty bucks she could make from selling an outdated camera could help pay some of it. The footage was captured, but now back to the drawing board. I was in debt beyond belief, both with student loans and credit card payments, and could barely afford a pack of cigarettes. No surprise here in New York City. The option of buying a camera of my own was not in the picture. While a few friends had offered their equipment, which was all HD, I was unable to accept. Though appreciative, my computer (eight years old now) can not handle such file size, so it is impossible for me to upgrade to glossy footage. Stuck between a rock and hard place.

When our friend Jonathan Ames, writer and creator of HBO’s series Bored to Death decided to sign on as a producer, it saved us a lot of further hardship. People become interested. Sincerely interested. They were now curious. Jonathan had seen and enjoyed a bunch of our earlier work, and actually had been paid a not-so-subtle homage in our piece The Sinful Bitches. Rev had sent him over the screenplay and he was enthusiastic about playing the role of producer, though we are still trying to figure out what it all means to this day. It was sort of a Paul Morrissey-Warhol affair if you understand what I mean. Finally, cameras, the ones I needed, the lo-fi type, came through and the film was back on track in all its outdated glory.

The cast consisted of some of our closest friends, a group of talented performers who were all eager about the idea of making a feature. Especially a horror film. Satan, Hold My Hand had it all. Blood, evil, nudity, violence and a tight screenplay. We began shooting scenes each weekend, piecing the sequences together as we went. I would edit each scene separately after filming, in order to avoid losing momentum. That was of course, until my other trusty sidekick, my eight-year old laptop decided to crash. The film would go on another hiatus until I found enough dough to get a hard drive. During this time, I went ahead and excessively indulged in alcohol and sleeping pills in order to cure the pain. (This may sound extreme, but to any overly ambitious artist reading this, I’m sure you know the feeling. A painter with no brush. A writer with no pencil. You get the point.) Eventually, a friend offered to purchase a drive for me, if I agreed to edit a music video for her. It just made sense and the deal was made.

Once we arrived over the next hurdle regarding production, personal problems between our cast and crew began to appear without missing a beat. One of our lead actresses became homeless, occasionally shacking up in our tiny apartment without any where else to go. My drinking had escalated to the point where I was losing ambition and hope in the project. My girlfriend would occasionally shake me out of my growing depression, but it would only reappear after thinking more and more about the struggles of making a film with no money and broken equipment. Why, you may ask why this was so different than any other time I had made a film with no money and broken equipment? Probably because I had one of the most dedicated cast and crews any filmmaker could ever ask for standing behind me. If the project failed, I failed them. End of story.

As we continued to shoot, nearing the end, I slowly began to realize how special the entire process was. Whether or not the film would be seen was another story. What was happening in front of my lens was magical. A group of beautiful, talented friends giving all of their energy to a film which THEY believed in. In fact, our main lead Faceboy, ended up playing six (count em’!) six characters! Partially because we couldn’t afford other actors and partially because he enjoyed the challenge. And believe it or not, but it actually worked!

There were a few more hiccups such as not having a permit while filming in Times Square and an actress believing that we were actually shooting a different film during the entire filming of this one (!Yup!), adding to the confusion, but nothing so severe than having one of your main leads drop out just an hour before shooting your most ambitious scene. Gulp.

The location was plotted, the times announced, the cast and crew anxiously awaiting shooting, and then you get the phone call. For any filmmaker, this is one oft the biggest nightmares aside from having a member of your team drop dead during filming (Sidenote: Yes this has happened to me. No, not on this project). The scramble began. Phone calls out to EVERYONE we knew who fit the part. Nothing. And in just a few minutes before — while the shoot would still go on, me getting everyone else’s close-ups to make the best out of a horrible situation — we finally got a catch. My anxiety has still not resolved from this moment.

The film, just a few days before penning this article, has reached a rough cut in the editing room (AKA my bedroom). Looking at the footage, I realized something dreadful, something awful, something so terrible, I thought I should just jump out the window then and there. I had failed. Or so I believed. The film, the horror film we spent over a year making, an entire year of blood, sweat and tears (well, not much blood) was actually turning into a, Gulp, comedy! What the fuck?!

To be clear, the screenplay had more than enough, shall I say, “hints” at comedic timing and hilarious dialogue, but I always saw this as simply being a way to continue through the terror and horror of the project without managing to sink into dullness. I also had to consider that everybody playing a teenager in this picture were actually middle-aged. Ever heard of suspension of disbelief? Now we’ll really get a chance to put that to the limit!

However, the Gods spoke loud and clear and what I felt were only nuances to comedy, turned out to be the bulk of the project. And to be honest, the film is just as good as I imagined as a comedy. I am excited to make camp films, even if I didn’t intend on doing so. Perhaps thats the point. Perhaps it’s in my blood. Something in my heart I hadn’t realized. I always loved the Kuchar Brothers and Jack Smith is a hero of mine, so it just makes sense I guess that I’d be influenced by their campy aesthetic after watching Sins of the Fleshapods and Flaming Creatures 100 times. After all, I was the one who edited the project – so the fact that I turned it into something I had no intention of doing, is quite an incredible moment to me. Am I disappointed? Absolutely not. It could only take a soulless, black-hearted, miserable excuse for a human to ever feel disappointed by the fact that they had the opportunity to create a motion picture with some of the greatest performers they know and shape what once felt like an impossible dream into reality.

I am aware that my work is raw, unpolished as much as I try to mask it up to seem, and lo-fi. I understand it is not for everybody. But one must remember that it was created with nothing but the love and support of others. My ambition can be overwhelming at times, and if I need to make a feature film on broken out-dated equipment just to feel alive, well then goddamn, let’s do it!

Satan, Hold My Hand has its world premiere Friday, August 30, at the Anthology Film Archives in New York.