A Woman Under the Influence: Hannah Fidell on A Teacher

by Brandon Harris
in Directors, Interviews
on Sep 5, 2013

Hannah Fidell’s slow-burn character study A Teacher relies on a taut and unsettling performance by Lindsay Burdge in the title role to crawl deep under the skin of the viewer. Diana, a youthful and fetching as a high school teacher, is one of the year’s most fascinating indie film characters; a remote and somewhat coy woman who is nonetheless caught up in a forbidden sexual dalliance with a male student, one which grows from a delicate crush into a dangerous and foreboding full-blown obsession with alarming velocity. That we’re at turns sympathetic to, fascinated and repulsed by Diana is a testament to Burdge’s fearlessness and the penetrating curiosity at the heart of Fidell’s screenplay, which takes this admittedly prurient fodder and invests it with a memorably frosty aesthetic and utter intellectual seriousness, presenting a winter-time Austin, TX that mirrors the loneliness in the title character’s heart.

The brooding alienation of Diana is captured not just in Burdge’s tense cheekbones and chilly, ineffectual millenial-ness, but by Brian McOmber’s subtle and terrifying score and especially by 2013 “25 New Face” Andrew Droz Palermo’s expert lensing, both of which serve to elevate the entire affair and throw into stark relief (without ever being unduly leading) the depth of Diana’s despair and internet-era psychosexual confusion. Recalling both the work of Michael Haneke in its themes and the Dardenne brothers in its intimate and roving aesthetic, it’s a triumphant second feature from Fidell, a 2012 “25 New Face” whose short The Gathering Squall, the toast of SXSW several years ago, first gained our attention. A Teacher premiered in the NEXT Section at this year’s Sundance Film Festival before stops at SXSW, the Northside Festival and many other significant regional fests. The film is already available on VOD; Oscilloscope opens the film theatrically in New York tomorrow. 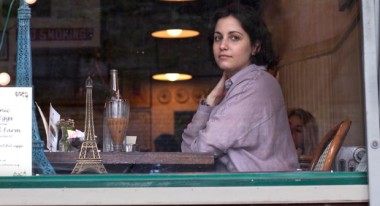 Filmmaker: How has the meaning of the film changed for you since you made it?

Fidell: I realized a number of things. This happens to everyone, I’m sure. The film references my own relationships and experiences a lot more than I thought it did when I was making it. It’s more personal than I ever set out for it to be. Not that I had a relationship in the last year or two with someone who was inappropriately younger than me, but just in how the themes of the film are obsession and not being able to stop yourself from making terrible decisions.

Filmmaker: What was the dialogue you had with Lindsay about this character like?

Fidell: I gave her a book. It had a bunch of diaries like histories of women who hadn’t necessarily been prosecuted, but who had been charged with this kind of thing and in the book their anonymity is retained. So we looked at the stories these women wrote and we talked about how we could maybe pick and choose what we could relate to in their stories as relatively normal women who hadn’t been involved in any illicit relationships like the one depicted in the film. We started brainstorming and going back and forth about what kind of music she would listen to, what she would wear, how she’d do her hair, what her family might be like. Lindsay and I went on this bonding trip about a month before production. It was a six-hour car ride between Austin and Marfa, Texas. In Marfa, we were there for four days and not really having anyone else to talk to, we just talked about the character and possible backstories for her. Lindsay really helped develop the character of Diana from the get-go. It was quite collaborative. It terms of what we actually talked about, Lindsay was really more trying to create a character that was a little bit more relatable to us, because it was the only way we could tell the story.

Filmmaker: She’s in almost every single frame. There is a lot of weigh on her shoulders in this one.

Fidell: Yeah! [laughs] We didn’t rehearse beforehand. We talked about the characters, but Lindsay and Will [Brittain, play the student she has an affair with] had only about four days or so to really get to know each other. Their homework was to go away together and really get to know each other and be really open with each other about their deepest, darkest stuff to build their trust. So we went out drinking a bunch and amazingly that really does help, people become friends! [laughs] Then the way that we shot was we would talk about the scene beforehand, but we would never really rehearse the scene. We’d go into the locations we were shooting, just me and the actors, we’d work out the scene together there just before we were about to shoot, then I’d bring in Andrew Palermo, show him how we worked out the scene, and then we’d do a quick shot list. But other than that, we didn’t have a traditional prep rehearsal and shot list, unless their was something really specific I knew I wanted to do in terms of certain camera moves.

Filmmaker: What went into you and Andrew creating the very muted and ominous grey palette for the film? It’s a wonderfully evocative look and a really fine match for the material.

Fidell: Well, even in Austin, it’s really grey in February. It was rainy for basically the whole shoot — well not rainy, but it was kind of grey and dark. That helped. We also looked at Carlos Reygadas’ film Silent Light. It’s one of the most beautiful films ever made.

Filmmaker: It’s among my favorite films ever.

Filmmaker: I once got racially profiled with him in Arizona. I’ll tell you about it another time.

Fidell: That’s incredible! I want to hear that story. [laughs]

Filmmaker: In that film, they use a lot of natural light and they’re often not shooting in necessarily pretty light.

Fidell: Exactly. That’s what we wanted. We wanted natural light, we didn’t want to be scared of long takes. Andrew and I also looked at a lot of the Dardenne brothers’ films for the more frantic scenes later in the film. They get so close up and they obviously come from a documentary background as well and they use the frenetic handheld camera style to great effect. What I noticed, going back and watching their films, is that they always have their characters doing something in the scene. Even if it’s as simple as having the actor move a cup, actors always have a physical goal beyond what’s going on in the scene. We tried to use that as inspiration. I don’t know if it worked. [laughs]

Filmmaker: Did you have to compromise on anything big during production or anything unforeseen that made things difficult for you at all?

Fidell: At one point, I thought the relationship with the other teacher would be stronger and play more of a role in the story but I think everyone does it differently, I know from experience that a film is going to change and be different from what you originally imagined it. So instead of having that happen and then being let down and feeling like a failure because it wasn’t exactly what I wanted, I’m just open to the fact that it’ll be different than what I had in my head. That’s also just the nature of working with other people in such a collaborative way.

Filmmaker: Were there other things that surprised you about how well they worked in the edit that you may have been worried about at the outset of post?

Fidell: Not really. It was just like putting a puzzle together. We had all the pieces there, but they might not have ended up in the same place as we thought that they would go [laughs]… I guess that metaphor doesn’t make sense because a puzzle has fixed pieces! I guess it’s more like painting if I’m going to go the metaphor route. There are so many different layers that go into the finished product. The post-production process was amazing in that I could finally see what was and what wasn’t and we actually ended up shooting more. I ended up bringing back people to continue shooting a month and a half after we wrapped.

Filmmaker: Did you have a rough cut at that point?

Fidell: There was stuff that wasn’t working. We were so invested in the film that we wanted to have the best film possible and people were willing to come back to Texas, even though a lot of them weren’t living there. We ended up reshooting and changing the ending. In the original ending, she never gets out of the car in front of Eric’s house. She just calls him, he won’t talk to her, the dad tells her to try back again and then she drives to the motel and we don’t know what happens to her after that. It just seemed anti-climatic. Thank God we shot that last part. It’s my favorite scene in the movie. It was obvious to me and my editor Sofi that we needed something else. I think I screened the cut to Lindsay and Andrew and Will and I said, “I think we might need to go shoot a little bit more,” and everyone was cool with that and somehow it slipped in there seamlessly.