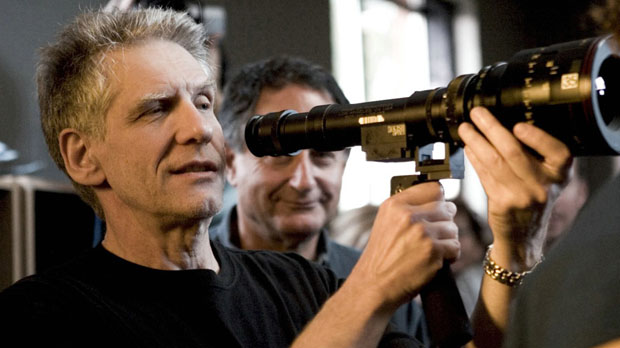 by Allan Tong
in Cinematographers, Interviews
on Oct 31, 2013

Peter Suschitzky has photographed films for John Boorman, Ken Russell and most notably David Cronenberg, but the 72-year-old d.p. still prepares each film with the written word. “It begins with a careful reading of the screenplay,” he says in a polite English accent over the phone from London, “trying to get a feel for, subconsciously, what’s in that script.”

Suschitzky is giving interviews to promote, Evolution, TIFF’s celebration of hometown boy and horror master, Cronenberg. Evolution launches Hallowe’en week at the TIFF Bell Lightbox in downtown Toronto with a multimedia exhibition of celebrating Cronenberg’s five-decade career that began long before TIFF. Also tonight, on Hallowe’en, Cronenberg and star Jeremy Irons will introduce Dead Ringers, which was filmed in Toronto, then the following night Irons will discuss his award-winning career in a 90-minute conversation . Later in November, Guillermo del Toro will chat with Cronenberg at a Masterclass examining Eastern Promises.

Suschitzky himself will introduce A History of Violence on December 7 and speak at a roundtable with other collaborators the following night about A Dangerous Method. However, he gave Filmmaker an early glimpse about working with Cronenberg.

“We don’t talk very much or at all about the look of the film,” he explains about pre-production. Suschitzky, of course, will inspect sets and locations, and shoot tests with actors, but for him and Cronenberg pre-production is a process of discovery where the film’s visual style doesn’t fall into place until the very first day of shooting. “You have to hit the style you’re going to use — when you do the first shot — for the whole schedule. Otherwise that first shot will look out of place if it’s done differently from all the other shots. Somehow it has to fall into place instantly.”

Their method must be working. Since 1988’s Dead Ringers, Suschitzky has shot 10 films for Cronenberg. Suschitzky says his visual looks changes slightly from film to film, shaped by the scripts and his “instinctive” way of working. “I work very much from the gut. It’s never a case of us saying, ‘Let’s make the movie look like this or that like somebody else’s movie or a specific painting,’” he insists.

Suschitzky gets complete freedom in lighting as Cronenberg never instructs him in how to light a scene. “We talk about the lens and the position of the camera.” In the past few movies, they have used only one or two lenses throughout the whole film. For example, the latest movie, Cosmopolis, was shot on a 21mm.

It helps that he and Cronenberg get along. In fact, Suschitzky has had genial relationships with several directors such as Ken Russell (Lisztomania, Valentino) whom he fondly recalls as interesting and fun. “He was interested first and foremost in the look of his movies. That came before the script.”

He recalls John Boorman having a truly original approach to his 1970’s Marxist parable, Leo the Last. “He wanted to make a color film in black-and-white,” explains Suschitzky. “There were very few colors in the film, only the faces really.”

Five years later, Jim Sharman invited him to shoot a slightly different movie, The Rocky Horror Picture Show.  “I don’t know why I was called about this project, [but] I was glad I was called.” He suspects age had something to do with it in an era when most British d.p.s where over 40, and he was already shooting features in his early 20s. “Jim Sharman must have seen some of my work and have been looking for somebody his generation who was not in the studio tradition.” Suschitzky admits that the campy transvestite world of Rocky Horror was “not familiar” to him, but it was a fun production. “None of us had any idea it would become a cult movie and be running still today.”

Soon after, another indie filmmaker approached him to shoot a sci-fi flick called Star Wars: “I remember telling him that I thought he should be asking the DoP who shot 2001, Geoffrey Unsworth,” Suschitzky recalls of meeting George Lucas. “I didn’t have visual or special effects experience.” Instead, Lucas worked with Gilbert Taylor (Dr. Strangelove, A Hard Day’s Night) and the two clashed on set. When Lucas was prepping the sequel, The Empire Strikes Back, he gave Suschitzky another call. Suschitzky and director Irvin Kershner braved paralyzing snowstorms in Norway to deliver the moodiest — and some say the best —  of the Star Wars movies.

The most important task of a director is to cast well, not just the actors, but all collaborators,” explains Suschitzky. “If the director of photography has a history behind him, the director is taking on board how the cinematographer has worked before. I don’t expect my work to be asked to look like a newsreel or to look radically different from what I’ve done before.” Suschitzky explains he will alter his approach to suit each film, “but there’s no point I telling me to adopt a style like X, Y or Z DoP.”

In 50 years of filmmaking, Suschitzky rarely has.