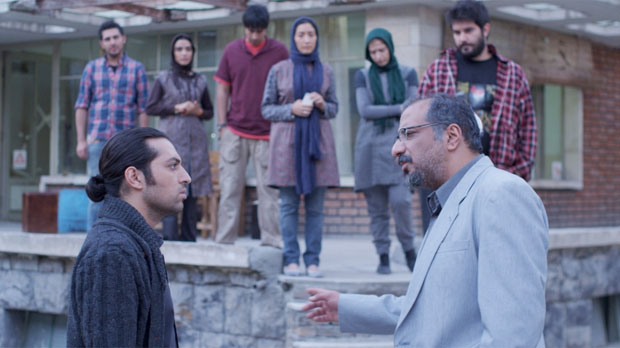 Situated in the southwestern part of Germany where the Rhine and the Neckar meet, Mannheim, like its sibling city Heidelberg – located upstream from Mannheim on the Neckar and a half hour away – is a university town. Only the University of Mannheim is housed in the 18th century Mannheim Palace, a massive baroque extravaganza that resembles Versailles more than any learning institution I’ve ever encountered. And even that pales in comparison to Heidelberg Castle, still partially in ruins since the Renaissance structure was demolished in the 17th and 18th centuries. This quaint city’s imposing castle emerges from the forested Königstuhl hillside like a great stone beast, overlooking Old Town, which, unlike Mannheim, was mercifully spared from Allied bombs during WWII.

So it comes as no surprise that the International Film Festival Mannheim-Heidelberg, now in its 62nd year, is both rooted in grand tradition and calcified by it. Don’t get me wrong – American film fests could learn much about hospitality, not to mention logistical functionality, from the only international festival in the world that takes place in two cities. It goes without saying that IFFMH screenings started on time. And that the vans, shuttling press and filmmakers between the Stadthaus and Heidelberg Castle, ran promptly according to schedule. The Stadthaus, which also served as festival headquarters – where I made use of the Digital Library and the cozy lounge with comfy white couches and Yule log video projections on tasteful white screens – housed two theaters. The big white tents set up next to Heidelberg Castle (and also containing faux Yule logs on white screens, lending it a ski lodge resort ambiance), had a further three theaters. In addition, there was another small venue in Mannheim, an art-house called the Kino Atlantis, which was a mere 10-minute walk from the Stadthaus. Food and drinks flowed throughout the day and night – hearty soups and light baguette sandwiches, beer and wine – in the pop-up cafés, often serving till 2AM, situated beside the theaters, which made rushing around between screenings in search of sustenance unnecessary. In other words, attendees could remain firmly focused on what we came all the way to Baden-Württemberg for in the first place. The films.

Unfortunately, this is where the calcified part comes in. The Special Screening section of IFFMH mostly featured safe bets, from the Coen brothers’ nearly critic-proof crowd-pleaser Inside Llewyn Davis (a charming period piece that follows a week in the life of a Village folk singer gone horribly and hysterically wrong – what’s not to like?) to Marc Bauder’s financial crisis flick Master of the Universe. That doc counterbalances gorgeously framed, Nikolaus Geyrhalter-style shots of cold metal and steel skyscrapers – indeed, Geyrhalter is listed as a producer – with its bureaucratically bland star Rainer Voss, a bigwig German investment banker (who intricately explains how the global economy went horribly, if not hysterically, wrong. What’s not to like?)

However, it wasn’t the Special Screenings, but the International Competition selections that historically have made IFFMH something special. The festival has long prided itself as being the place to discover future auteurs, over the years internationally premiering the debut features of now recognized masters, ranging from Truffaut to Fassbinder, Wenders to Kieslowski. (Not to mention Egoyan, von Trier and Vinterberg – even Americans such as Jim Jarmusch and Ramin Bahrani.) In order to be eligible for the International Competition, a film not only has to be a German premiere, but also must not have played Cannes, Venice, or Locarno. Thus, the prospect of being the first American critic to identify the next Lars von Trier was like cinematic catnip to this hardcore film geek.

The good news is one debut feature did shine brighter than all the rest. The bad news is that the rest I saw – albeit less than I’m accustomed to, as IFFMH is one of the rare fests that, frustratingly, does not offer online screeners to press – were mostly fool’s gold, exhibiting technical proficiency over any daringly unique vision. Sure, nearly all the selections contained eye-pleasing visuals and high production values, but also self-conscious, eye-of-the-director camerawork (Best Tracking Shot could have been an awards category) masquerading as self-assured style. And the stories underlying those grand images were decidedly small screen – the equivalent of watching TV dramas in Cinemascope. A disappointing pattern began to emerge, with film after film getting off to a promising start only to sputter into formulaic complacency. In fact, after awhile I started to feel as if I were watching the same approach and filmmaking grammar plugged into different plots and set across a variety of countries. Then again, at least there was a diverse range of nations to choose from – if not filmmakers.

And therein lay the most glaring problem. Out of the 17 films in competition, female directors helmed a whopping two. Even more disconcerting, of the remaining 15 male directors, I counted one Iraqi (a Norwegian entry), one Iranian, and one Latino male (that would be Carlos Lechuga, the impressive Cuban director of Melaza, which I’d already earlier discovered at the Trinidad & Tobago Film Festival). That left a dozen white European dudes, albeit some working in foreign lands. Which, of course, I wouldn’t have noticed – just as that all-male list of IFFMH auteur discoveries hadn’t raised any alarms – had this year’s filmmaking been overwhelmingly exceptional. Perhaps all the stellar women and directors of color had been snatched up by Berlin earlier in the year, but certainly there were more than five filmmakers out there in the world of the same caliber as this boys’ club. At least enough to keep me from getting bored and restless. (Then again, with a screening committee of four men and two women – all of a certain age and none of color – perhaps I shouldn’t have set my expectations as high as I did.)

All of which made Behnam Behzadi’s Bending the Rules both a revelation and an outside-the-film-school-rulebook relief. The Iranian film concerns a young idealistic theater troupe navigating generational obstacles on the cusp of performing abroad when their lead actress goes missing. Which is a bit like saying Antonioni’s L’Avventura is simply about a woman who disappears during a boating trip. Like with most Iranian films these days, subtext speaks louder than images. Set against the backdrop of ambient sounds (the scream of a siren, music generated only by the troupe member in charge of the play’s score) and random visuals (a worker with a blowtorch sends out sparks in the background during a tense exchange between a father and daughter), Behzadi’s Dogme-style approach gives the tale a broader context. Even as most of the action takes place in the claustrophobic confines of a rehearsal room – which likewise serves as a metaphor for society’s larger constraints.

Even as they play make-believe, these young idealists, oftentimes over-the-top theatrical and prone to chatty debate (in other words, like most actors who see their everyday world as a Broadway stage), are forced to confront moral dilemmas and make grownup decisions, the stakes increasing with every scene. Do they search for their lead actress – who previously attempted suicide – and return her to the father who has taken her passport to prevent her from going on tour? Do they not turn her in – and have their visas revoked by that same politically connected father? In other words, which should you value more – principles or (artistic) freedom of expression? There are no easy answers to these universal questions, which renders Bending the Rules a thrilling, mind-twisting, existential allegory at its core. This year’s IFFMH may have had a few strikes against it, but in discovering Behnam Behzadi, the sexagenarian fest has once again hit a home run.