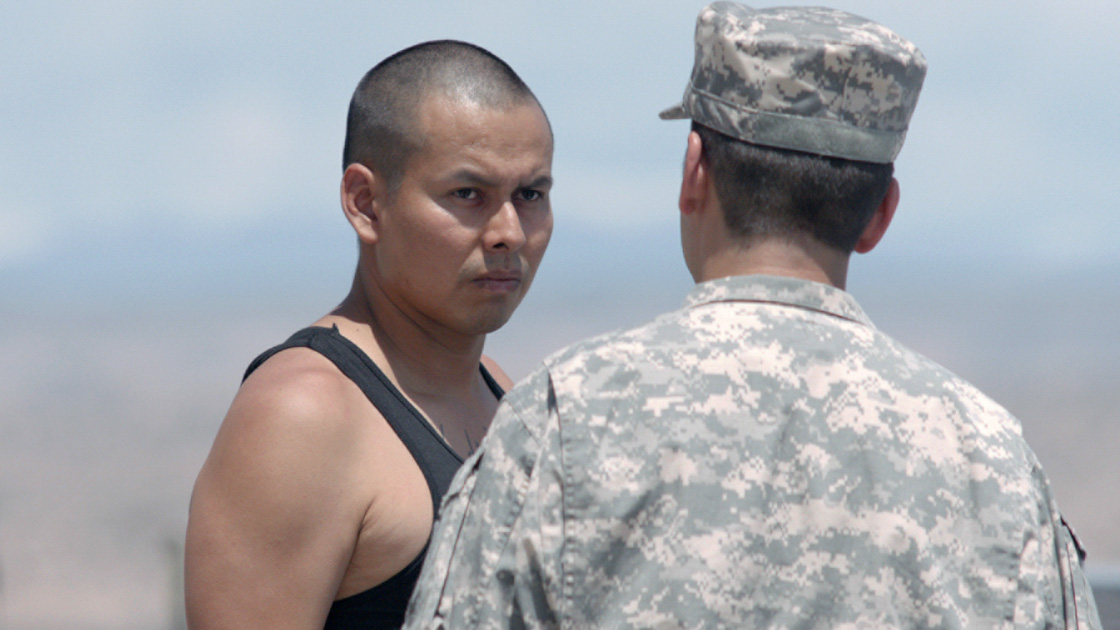 I’ve been hearing the praises of Drunktown’s Finest director Sydney Freeland being sung for some time now. The 2004 Fulbright scholar and Sundance alum – whose long list of awards includes a Sundance Institute Screenwriting Fellowship and a Sundance Institute Directing Fellowship in 2010, and a 2009 Sundance Institute Native American Lab Fellowship – has also long been a fixture on the cozy New Mexico filmmaking scene. (Since I programmed the Santa Fe Independent Film Festival 2012 it’s not surprising the Gallup native and I even share mutual friends.) That said, as a jaded critic it’s second nature for me to simply roll my eyes at hype. Yet after watching Freeland’s debut feature, it’s safe to say I now understand exactly what the film’s executive producer Robert Redford sees in Freeland.

An authentic voice with a refreshingly nuanced vision, for one. Drunktown’s Finest follows the interweaving struggles of three young Indians – a soon-to-be father days away from the start of basic training, a college-bound adopted daughter of Christian missionaries, and a transsexual beauty pageant contestant in the running to become one of the “Women of the Navajo.” In other words, novel characters I actually haven’t seen on the big screen before. Even more remarkable, Freeland eschews easy villains in favor of creating believable people just doing what they can to get by. (And what they think is right, however misguided that may be.) And like with Patrick Wang’s similarly subtle In the Family, Freeland’s characters don’t dwell on their marginalization – be it Native American or trans or gay or any combination thereof – which is how real people, with much more weightier issues to tackle than simply defining themselves, behave. (Only in antiquated movies do LGBT folks’ lives revolve around identity 24/7.) And in addition, Freeland gives us a poignant bonus insight – that as bad as it can get on the rez, a spiritual sustenance is lost when leaving it.

Filmmaker spoke with Freeland prior to her Drunktown’s Finest debut in the NEXT section at Sundance.

Filmmaker: It sounds like this film had a mission statement from the get-go. Can you talk a bit about the impetus behind Drunktown’s Finest and how the film evolved from there?

Freeland: I guess you could say I just wanted to tell a story about the people and places I knew growing up. I never really felt like I saw anybody that I knew in movies. I also wanted to show how diverse the reservation is, where the three main characters came from. They each represent different communities, and you get to explore the different aspects of that world that wouldn’t have been possible otherwise.

Filmmaker: How important is it for you to employ Native Americans and LGBT folk, both in front of the camera and behind the scenes?

Freeland: For the role of Felixia, it was very important that we cast someone who was transgendered. I’m very grateful to have met Carmen Moore, who is both trans and Navajo. When I was writing the script (around 2009), I saw a video of her on YouTube and was like, “That’s Felixia!” Fortunately, she read the script and liked it, and was even able to come up to the Sundance Directors Lab in 2010. I was really impressed with her because she brought a depth and authenticity to the character that very few people would have been able to. I’m really happy with her performance in the film.

Filmmaker: As a white chick who identifies as genderqueer I’ve always subscribed to the, perhaps romantic, notion that indigenous communities are more accepting of transgender people than the population at large. Your film does show this – as the medicine man and his wife completely accept their trans granddaughter for who she is – but it also addresses a more complicated reality, with a younger generation maybe not so at ease. (Yet off the rez it’s the exact opposite – with millennials supporting LGBT rights far more than their elders.) Is this actually the case – or am I reading too much into a fictional storyline?

Freeland: I can only speak to my own experiences on this. The grandma and grandpa characters represent the more traditional aspects of Navajo culture. And one of those aspects includes the concept of 3rd and 4th genders. The mindset on the reservation tends to be more conservative, but because this is part of the culture, it made perfect sense that they would be accepting of Felixia.

Now here is the ironic part – I grew up on the reservation but had no idea about this aspect of Navajo culture. The first time I really heard about it was when I moved to San Francisco. I met a trans woman who, when learning that I was Navajo, was like “Wow, the reservation must be so loving and accepting of the trans people!” I didn’t know what she was talking about at the time, but I was able to research and learn more about this. It ended up that I had to move to San Francisco to learn about my own culture.

Filmmaker: You’ve been involved with the Sundance Institute for a number of years, having taken Drunktown’s Finest from the Native Filmmakers Lab to the Screenwriters Lab, to the Directors Lab and Composers Lab, to the Producers Summit. Which stage of the process proved most useful during actual production and, conversely, was there any aspect you wish could have been more helpful?

Freeland: The Screenwriters Lab and Directors lab were absolutely crucial to my growth as a filmmaker. It completely changed my outlook and approach to writing and directing.

My writing approach going into the Screenwriters Lab was more of a plot-based one. What they really challenged me to do was really focus on character, to let character influence plot instead of vice versa. My directing approach going into the Directors Lab was more of a “getting specific shots” (trying to get the exact shots I had storyboarded, etc.). Again, they really challenged me to focus more on performance, instead of trying to capture individual shots.

This led me to work more on a script that was character driven, and a directing approach that was performance driven. It sounds like a simple concept, but I feel like the film is so much better for it.

Filmmaker: How do you feel about labels? It took years for Spike Lee to transcend the “black” before “filmmaker,” yet I would venture to guess that Chris Eyre is still known as the Indian who did Smoke Signals. (Then again, we’re talking about indie not Hollywood. Lana Wachowski’s label is probably a big dollar sign.) Do they allow underrepresented artists and audience members to connect, or keep the filmmaker in a constrictive box? Both?

Freeland: Yeah, labels are tricky. I am a member of both the Native community and the LGBT community. However, my goal with this film was to not go into it with an agenda. I simply wanted to tell the best possible story I could tell. My thinking is, if I can get someone from New York City to relate to the plight of a Navajo transsexual on an Indian reservation, then that kind of negates the need for labels. That to me is the beauty of filmmaking.