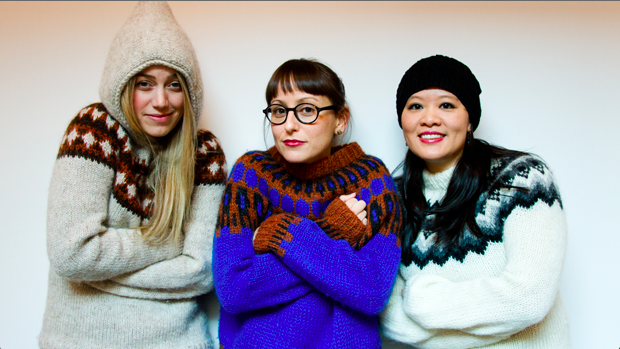 When I went to meet Land Ho! co-director Martha Stephens and producers Mynette Louie and Sara Murphy in their color correction suite in Midtown NYC, they were in fuzzy sweaters with zigzag lines, and were laughing often – which makes sense as their film is a road trip comedy set in Iceland (about two older men who must contend with life after retirement).  Just months earlier these sweaters had shielded their crew against the vibrant and freezingly unpredictable Icelandic elements during the production of their film (and kept them warm after getting out of dips in the hot springs – on their days off only of course).

While the third female producer, Christina Jennings, could not be at the photoshoot, all four women answered questions over email surrounding their film and what it means to be a female filmmaker today.

Filmmaker: Why this movie? Why did you each decide to do it?

Stephens: I have another project I’ve been taking around to the labs, and at some point I realized it was going to take a lot of time and money to produce it. I wanted to make something in the meantime – a slimmer but fun project, a comedy. I felt like I had something to prove, that I was capable of creating something more than a slow-paced regional drama.

Since Aaron [Katz, Land Ho!‘s other director] was in a similar place with his projects, I proposed we co-direct. I thought we could look at it as a laid-back experiment, trying new things neither of us had done before (co-directing, shooting in a foreign country, making a comedy, etc.). The idea was to make a traditional buddy comedy, but less stilted, more natural.

Filmmaker: Please speak to co-directing with a male director. Do you think this film would have been handled differently without a female directing voice? How did your being a female filmmaker effect how this film got made do you think?

Stephens: Aaron has been one of my closest friends for over a decade, so I don’t think of either of us in terms of gender, he’s just Aaron. I trust his vision. I think he’s talented and full of great ideas. Because of our mutual respect, co-directing was a blast. There were a lot of crass jokes, bad celebrity impersonations and giggle fits throughout the production. Of course we took the movie very seriously, but the movie really came together because of our cohesion – not just between the two of us, but among our entire crew.

I rarely think of myself as a woman director, just as male directors don’t primarily self-define in gendered terms. I think of myself as a director. This film would have been handled differently if anyone, male or female had been behind it. Land Ho! contains my and Aaron’s voices respectively. These voices come from our experiences: where we went to school, how we grew up, people we’ve known, etc. Maybe our individual histories stem from some gender-related experiences, but ultimately we’re individuals that don’t think too much about what’s between our legs.

Stephens: We were financed through Gamechanger Films, which is a film fund that finances narrative features directed or co-directed by women. Without Gamechanger, I don’t know if we could have immediately found the financing to go to Iceland this past September. I have great admiration and respect for what Gamechanger is doing. They welcomed a mostly male-populated script because they want to support female directors, regardless what stories we’re compelled to tell.

Filmmaker: Please speak to directing a film about male characters. Did you feel like it would have been easier at all to direct a film about females?

Stephens: No. This script was written with [actors] Earl Lynn [Nelson] and Paul [Eenhorn] in mind. I wanted to tell Mitch and Colin’s story. When speaking with baby boomers like my parents, I always feel like there is a hint of regret and an underlying sadness that maybe things didn’t pan out in their golden years exactly the way they had imagined. I simply find this topic interesting and knew Earl Lynn and Paul could handle the subject in a funny yet poignant way. Maybe because I’m an outsider to male bonding, I wanted to use this story to explore it.

Filmmaker: Who do you hope is your audience? Men or women? Both?

Stephens: The whole shebang: men, women, old, young (not too young because of some saucy language) – anyone willing to make the voyage.

Stephens: If we’re talking this past year, I’ll go with an unpopular choice and say The Lone Ranger. Although it wasn’t a perfect film, and it bombed at the box office, I felt it was unjustly criticized and misunderstood. It had this larger-than-life, sweeping quality that I am a sucker for. Just wait, in 20 years they will be reevaluating this one.

If we’re talking among all blockbusters, Jurassic Park naturally.

Stephens: I’m hoping to film my next feature, Papaw Easy, next winter. It’s a coming of age story about a young boy that is sent to live with his religious aunt and uncle while his mother is in jail and his father is in rehab. During this time he befriends a down-and-out, elderly playboy that recently moved back to his tiny Appalachian community. The two form a sort of Walter Matthau / Tatum O’Neal friendship, a la Bad News Bears. The story is both really sad and really funny.

Filmmaker: Considering this article will be released at Sundance: A) What do you hope to gain from being at the festival? and B) Who would be your dream person to meet while there?

Stephens: First of all, I’m humbled by being asked to screen at Sundance! It’s absolutely wild. Like anyone, I hope our film will gain exposure and the premiere will be a success. If this could open more doors to other projects, that would be amazing. I’m also looking forward to meeting other filmmakers and making new friends. Since no announcements have been released yet, it’s hard for me to say who would be my dream person to meet. John Goodman? I love that guy. Will he be there?

Stephens: “Was Iceland just as beautiful and otherworldly as it looks? How was your experience filming there?”

My answer: Iceland is magical. It’s one of the most mysterious and beautiful places I have ever been. It was a terrific counterbalance to Mitch and Colin’s comedy. I would film there again in a heartbeat. We had wonderful experiences throughout the shoot and even had a few ghostly encounters. One of my favorite memories was on our last weekend, when the crew took two cars out and drove around aimlessly looking for the Aurora Borealis. We eventually spotted it an hour outside of Reykjavik and just stood silently, in awe and amazement. Where else can a crew relax in geothermal pools on their days off and insulate themselves on set with the world’s handsomest sweaters? Iceland, my friends. Iceland.