Is the Future of Film Distribution in the Live Format? 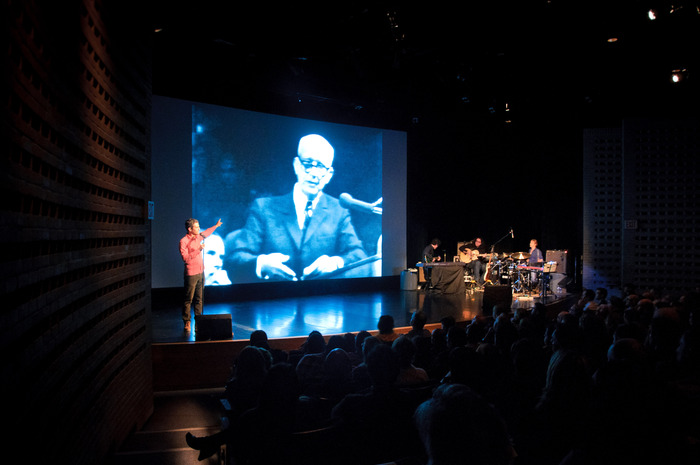 by Sarah Salovaara
in Distribution, Filmmaking
on Feb 13, 2014

A few weeks back, I went to see a one woman show called HAPPY, performed by my friend Eleanore Pienta. It was confluence of many emotions and personalities, but found a recurring framework in the live realization of film. A projection of Eleanore, in character, in a setting, would appear against a backdrop for several minutes, before the lights switched on and Eleanore strode onto stage as that same character. She was effectively bringing these short films to life, something I recalled while reading Sheri Candler’s post at Hope for Film entitled “Creating ‘Live’ Films Can Be Artistically and Financially Fulfilling.”

In the lede to her interview with filmmaker Sam Green, Candler discusses the contemporary need to “eventize” the cinematic experience in order to draw audiences from their houses. Skype Q&As won’t cut the mustard — there is not enough work out there that can only be experienced in a live format.

Enter Green, who screened The Measure of All Things at Sundance with in-person narration and a live accompaniment courtesy of yMusic. Green knows a distribution deal is out of the question for his vision, and so he functions more like a band, touring the experience crosscountry.

For the audience-friendly Green, this method is not only preferable, it’s economically viable:

The film distribution world has imploded largely because of the digital world.  Everything is online, consumers are getting used to seeing things for free or very low cost. The bottom has really fallen out of the revenue. But that hasn’t happened to the performance world because there is no real digital equivalent to seeing a live performance. It is possible for a filmmaker to access this performance world. A lot of the shows I do are in the performance world; in museums and performing arts centers. The fees they pay are significant.  I soon realized this is a much more viable way for me to distribute work…Artists should be compensated for their work and I am pained by the fact that many filmmakers make no money off of their films. Their films may get out there, but they don’t make any money from that. I am happy to have figured out a way to get my work out there and make money from it.

Green wisely notes that this supposed implosion has already been navigated by the music world. When Napster and all of its minions zapped the revenues from record sales, bands realized the bulk of their money had to be made on the road. The paradigm shifted accordingly.

Circling back to my opening, this all got me thinking about the space for short films in the marketplace. It’s a half-written rule that short films make their investors no money, that after they play a handful of festivals, they end up on Vimeo or YouTube and drift off into “calling card” ether. Yes, you can sell them for a premium online or license them to branded content, but outside of the festival circuit, is anyone paying to go see short films in a theatrical setting? Would anyone pay to see them, say, if they were accompanied by a live, supplemental performance? Maybe. There should be a way to make money off of films, in a theatrical setting, regardless of runtime.

Still, it’s easy to be wary of injecting theatrical elements into film: the two are distinct art forms for a reason. But perhaps people wouldn’t be so wary in finding that thinking outside of the box has its financial and artistic rewards.