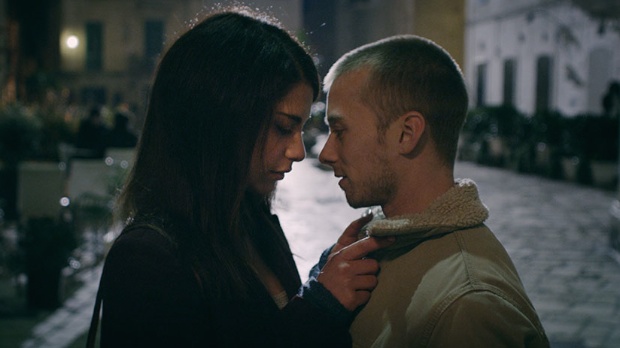 by Scott Macaulay
in Directors, Interviews
on Sep 5, 2014

“Before Sunrise with a supernatural twist” is how Toronto programmer Colin Geddes preps us for Spring, the second co-directed feature by Justin Benson and Aaron Moorhead. In their earlier Resolution, the two explored themes of friendship and substance abuse within a twisty, ironic horror narrative. Here, as Geddes indicates, they decamp for abroad, settling their film in Italy where a young American traveler (Lou Pucci) falls for a beautiful German woman (Nadia Hilker). A (“terror”) romance follows. Below, we talk to the two directors about shooting abroad and trying to stay original when working within the horror genre. Spring has its world premiere Friday, September 5, at the Toronto International Film Festival.

Filmmaker: Within the horror genre, your films are structurally ambitious in terms of how and where they deliver scares and introduce their genre elements. Could you discuss the screenplay for your new film, and the decisions you made in terms of introducing or withholding its horror elements?

Moorhead: A lot of what we do relies on building a tonal dark thundercloud around everything that happens throughout the film, so you can ride that tension all the way through a simple world-building scene, or deflate it with a well-timed dry joke. It starts at the script phase, where Justin is always digging deep to either prey on what you think will happen in horror in order to subvert it, or to invent completely new ideas that scare you to think about them. It carries through production and especially is nailed down in sound design and music. The jump scare is a tool we use as sparingly as possible — it gets people for just a moment, but the conceptual terror augmented by the dark tone is what gives them the permanent tightness in the viewer’s throat.

Resolution, besides being an eerie script about Fortean fringe subject matter having a central horrifying concept, also leaned on subjective cinematography, crackly sound design, and long, strange edits to make the viewer feel uncomfortable even in mundane situations. This time around we made something more cohesively cinematic (“it feels like a movie!”), and we had music in our toolkit. Our composer Jimmy Lavalle built the musical cues by, for example, wildly distorting samples of his baby crying or his wife screaming into musical notes, and along with unnerving establishing shots implying something ominous going on in between seemingly-banal scenes, we built this dark, menacing landscape on a bright, idyllic Italian coast.

Benson: Yeah. We play a lot with juxtaposing beauty with the grotesque, both visually and sonically. That said, in the whole process, writing included, there’s never a conscious separation of genre elements. In fact, specific genre is never really brought up among the two of us. There’s an occasional question of tone, or really just double checking that we’re not violating it with a joke that’s gone too big. And with the monster stuff, our first movie, Resolution, had a central story reason why we literally couldn’t show our monster and maintain camera logic. But with Spring we had to and wanted to show the thing a lot, and it’s really fun. There’s still the Jaws ideology here that the glimpses of the monster don’t work without some really interesting characters to get to know in that boat, but we do also give the audience that pleasure of visceral imagery. Interestingly, the structure of Spring is that it reveals the central mystery of what exactly the monster is heading into the third act, and that’s exactly the same structure as Resolution, just with a romance and showing a whole lot more monster. It was written while we were mixing Resolution and was definitely a reaction to how we would like to progress from our first movie.

Benson: Oh she’s not a succubus or demon, and even that deduction is probably giving away some of the fun. Who or what exactly the monster is is actually the central mystery of the story for much of the movie. But as far inspiration for her in the writing, everything I know about women is from my mom, past relationships, and female friends I have, so probably some inspiration there. But I’d also say she’s more of an amalgamation of everything we know about people in romantic situations, male or female. There are no cinematic references for the monster, at least not intentionally, but in designing it with FrostFX we did use a lot of reference images from nature.

Moorhead: What’s so beautiful about Justin’s invention in Louise is that the mystery of what she is is rooted in red herrings about what you as an audience member expect/want her to be based on what you know about horror myths. And while we’re going to be coy about what she is because that’s the whole great big question of the film, I’ll say that you’ll walk out of the film talking about a mythology you’ve never seen before.

Filmmaker: How did your production model change as a result of your Italy locations? Was it hard to shoot there? Did you work within the local filmmaking system, or did you import more of an American independent style?

Moorhead: We were warned it would be rough to shoot in Italy, but frankly those who warned us were wrong or had very different experiences than us. It was incredible. The short hours were a little tough (1/4 less shooting hours in the day by comparison to the U.S. system) but the crews made up for it in efficiency and enthusiasm, and thank god their English was perfect, for our sakes. The Apulian Film Commission offered tons of financial incentives to make it happen (tax breaks, hospitality funds etc). Justin and I do so much in-house between the two of us as writer/directors/cinematographer, so there was definitely our “run around with a camera” spirit still happening in between executing our shot list, grabbing whatever we could. We don’t shoot with the intent to find things in the editing room; pretty much everything we shoot we know how it fits into our film, even if it’s not always planned that way in advance.

Benson: Yeah we’re still two dudes running around with cameras in our hearts, and it didn’t really change anything for us. We plan so thoroughly and precisely in pre-pro that it leaves just enough jazz for set, but never any unfortunate surprises. Our crew was amazing and the shoot was perfect. Instead of unions they have really strict labor laws over there so you do a 10-hour day instead of 13, but our crew from 9.99 Films kicked so much ass we barely felt the difference of time. Also, we had our perma-producer David Lawson with us the whole time so the entire production ran like a director’s fantasy.

Filmmaker: Where do you see your films fitting into today’s genre film marketplace? Is the field of independent horror a healthy one?

Benson: We make fresh, heartfelt, often chilling but always fun movies that we as audience members would want to see. Indie horror, indie film in general, from a creative stand point is better than it has ever been. Sure people are making less money, but in this new world of being able to make movies cheap where there’s tons of distribution opportunities with minimal marketing expenses, we’re seeing more risk-taking stories than ever and it’s wonderful.

Moorhead: So far, so good! We were told Resolution might have trouble finding its audience, but now it feels like everyone in the indie horror scene has at least heard of it, and it’s made its distributors happy. I suppose we like the Coen Brothers model. They don’t make any particular genre, film after film; they just make Coen Brothers films, and they’re always financially successful and always good. As our budgets and profiles grow, as long as we can keep doing unique projects that we can get behind, the marketplace will find a place for us. We’re not so jaded as to feel like we have to make something middle-of-the-road in order to have a film make money. Audiences are smart as hell and want more unique movies than ever, even in the mainstream.

Filmmaker: What lessons did you learn from the making of Resolution that informed the way you approached this new project?

Moorhead: For me, Resolution‘s success gave the confidence to make Spring precisely the way we wanted to make it and not feel the need to pander to someone else’s taste or some preconceived notion of what the genre needs to be. We had total creative freedom over both films, and we feel like they turned out something we’re so proud of because we didn’t over-develop them. It made the budget tight, but that was worth it. Resolution being a bit of an experiment in committing to an idea so fully that its very nature requires the film to be less cinematic was a huge gamble. It told me that although I haven’t seen the path trodden before doesn’t mean it shouldn’t be taken, and in fact it’s all the more reason to take it.

Benson: Take big risks with the story, make it personal, create new myths beyond the same four recycled monsters we see over and over again, spend two weeks rehearsing with the performers, spend a lot of time on that sound with Yahel Dooley, and always stay focused on characters that are real, beautifully complicated human beings. It’s okay to not do homage with the right combination of levity, heart and chills.