Film as Sushi: :: kogonada on Chris Marker, Criterion and the Art of the Film Essay 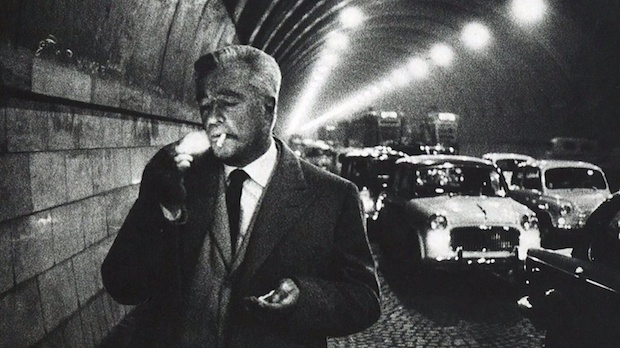 by Scott Macaulay
in Directors, Interviews
on Sep 22, 2014

As part of our screening of short films by the 2014 25 New Faces at the IFC Center tonight will be two works by :: kogonada, the somewhat mysterious, Nashville-based film essayist whose works have scored hundreds of thousands of views on Vimeo and other platforms. Whether he’s assessing hand gestures in the work of Robert Bresson, one-point perspective in the films of Stanley Kubrick or pinpointing the salient characteristics of neorealism, :: kogonada brings a precision, delicacy and poetry to film studies. At the IFC Center tonight he’ll be screening his essay on narrative in the work of Steven Soderbergh as well as a hypnotic three-panel work based on the films of Yasujiro Ozu. Below, :: kogonada, whose work often appears on Criterion DVDs, peels away a bit of the mystery surrounding himself and his practice. (Brief portions of this interview were used in our 25 New Faces piece on the filmmaker.) Come meet the filmmaker tonight at the IFC Center.

Filmmaker: Tell me how you came to the States and about your childhood.

:: kogonada: My family and I immigrated to the U.S. when I was a child. My parents are immensely creative, but like many immigrants their days were dominated by work. Nonetheless, my father passed along an aesthetic mindset. He’d often find a piece of wood and say: “Look, this is art.” To me, it just looked like a branch, but he would go on about its form: the curve, the balance. Sometimes he’d bring it home and display it. (My parents still do that. I’ll go home and see a rock or a piece of bark displayed in the house.) I realize now that he wasn’t making a statement about art, but a way of seeing–as if to say, it’s our responsibility to attend to the form of things. Later, I’d read McLuhan and Sontag warning about content blinding us to form, and it resonated with me. Forms matter.

My father also used to say: “A good painter never blames his brush.” This statement was applied to everything. (I never actually painted.) Don’t make excuses. Take responsibility. Because being a “good painter” is also always about a way of seeing. He’d say, “A good painter could use a stick and make something more interesting than a bad painter with the best brush.”

I think in some ways the pieces I’ve created are an echo of my father picking up a piece of wood and telling me to look, to see.

Filmmaker: How do you describe your work?

:: kogonada: Honestly, I don’t have a good description for my work. I try to avoid it if possible. I’ve never described them as “supercuts,” but I understand why some of my pieces have fallen under that category. I think my longer pieces are more or less essays for the lack of a better word. (I’m actually working on a new piece about the problem with film categories, specifically the “documentary.”) I suppose if I had to choose something it might be “bricolage” or “sushi.”

Filmmaker: I sense that you have done critical writing on film before. Is that correct? How much of your work is an outgrowth of a literary critical tradition vs. being organic to the world of the web?

:: kogonada: I was writing a dissertation on Ozu, time, and modernity (not in cinema studies but in critical theory) when I decided to stop and make films instead. Most of my critical writing on film resides in this unfinished dissertation. But I think my work is partly an outgrowth of that critical engagement, as well as an outgrowth of our evolving mediascape, which not only makes such work possible but cultivates it.

Filmmaker: How did an interest in using film as a critical tool to discuss film arise?

:: kogonada: My initial interest was less about film analysis and more about the aesthetic possibilities of remixing cinematic forms. (I may still lean in that direction.) This is not to say that I wasn’t interested in presenting a way of seeing cinema but not in a didactic manner.

Filmmaker: Where does this work fit in your life right now? Is it a side job, a passion, or the centerpiece to your professional life?

:: kogonada: In the past year, it’s become the centerpiece of my professional and creative life. I feel fortunate, to say the least.

Filmmaker: How much of your work that’s on your Vimeo page is assignment work, where the subject has been proposed to you, and how much is self-generated in terms of its subject matter?

:: kogonada: Most have been self-generated, or else coordinated. For the neorealism piece, I was asked if I could create something on this subject, but the approach, angle, and films were up to me. Of course with Criterion, it has to do with the films they distribute and/or are releasing. However, within those boundaries, they’ve been incredibly open.

Filmmaker: How have you managed to build a relationship with Criterion?

:: kogonada: Well, I still feel like it might be a dream, so I’ll be bummed if this question wakes me up. They reached out to me and asked if I would be interested in working together. (Peter Becker had seen some of my pieces.) There was a time when I used to visit Borders simply to caress the spines of Criterion DVDs — so my answer was “yes.” In many ways, they are the perfect partners. I feel incredibly grateful.

Filmmaker: Are the scripts in pieces like the neorealist video yours? Did you do the voiceover?

:: kogonada: Yes and yes. I write the scripts and do the voiceover (and everything else).

Filmmaker: Now that you are submitting TEMPO // BASHO to festivals, what are your thoughts on the relation of what you do to the viewing medium? How have you conceived this piece for a more theatrical experience?

:: kogonada: I definitely feel mindful about this relationship; whether the pieces will be viewed largely online or on a disc or in the case of TEMPO // BASHO projected onto a screen. I don’t think the pieces are necessarily limited to one kind of viewing experience, but when I create them I usually have a particular viewing medium in mind. With that said, it seems clear that viewing habits are evolving. As well, viewers seem to be increasingly more sophisticated in regard to what they are able to process and appreciate. Maybe one day in the future, people will watch the later works of Godard and say, “Oh, yeah, I get it. That makes perfect sense.”

With TEMPO // BASHO, I did feel more aware that I might have an audience who would be willing (or maybe even desire) to engage a piece that required greater attunement. Ozu // Passageways was a sort of sketch for this larger piece, which I’ve had in mind for a while. (Originally I thought I might create a feature-length piece on the cinema of Ozu presented as a kind of visual symphony.)

Filmmaker: Why do you prefer to remain largely anonymous?

:: kogonada: I like Chris Marker’s idea about your work being your work. I’ve also never identified much with my American name, which always feels a little strange to see or hear. My family almost never calls me by that name. They use a nickname that I’ve had since I was a kid. I also went by a different name during my academic phase. I’m quite fond of heteronyms. With that said, I’ve shown up at screenings for my work. I have no problem with being seen. I’m just more comfortable working under a different name.

Filmmaker: Who do you think your audience is? Has your conception of that audience changed as you have progressed forward?

:: kogonada: I think my audience are people who appreciate form in one way or another. I don’t think they are necessarily cinephiles, although I know many are. When I create these pieces, my desire is not to exclude people who are unfamiliar with a director or their work. I want the pieces to be able to stand alone, as a distinct visual and temporal experience, but then also draw them into a way of seeing a particular filmmaker or cinema itself.

Filmmaker: What ambitions do you have for your work moving forward?

:: kogonada: I want to continue to explore the possibilities of this form. Cinema as we know it is changing. How we make it, consume it, engage it. I want to contribute. I’m hoping to create a feature-length piece in the near future, whether it is a series of pieces (sushi style) or a single experience (possibly narrative and/or experimental).

Tickets for tonight’s screening, which will include a panel discussion on short film by four attending filmmakers, can be purchased here. Below, :: kogonada’s masterful piece on time in the work of Richard Linklater.

Linklater // On Cinema & Time from kogonada on Vimeo.