“It’s Too Important to be Tucked Away for Another 30 Years”: Don Argott on Kickstarting Kurt Vonnegut: Unstuck in Time 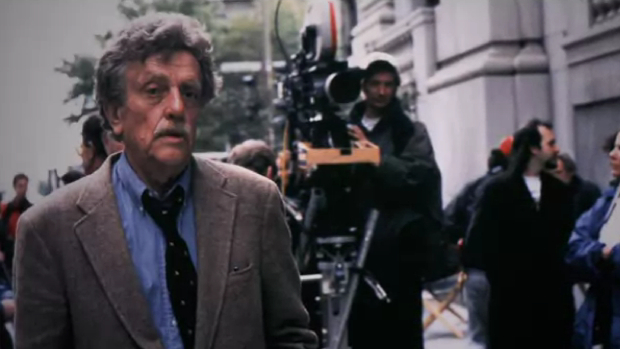 by Lauren Wissot
in Directors, Financing, Interviews
on Feb 11, 2015

Don Argott’s interests are eclectic, to say the least. Just in the past five years the Philly-based documentarian has followed the downward spiraling of rock stars, explored a nuclear-reactor community and, most recently, launched a Kickstarter campaign for his latest project Kurt Vonnegut: Unstuck in Time. The in-production doc is co-directed by Curb Your Enthusiasm co-creator Bob Weide and is about his decades-long attempt to make his own film about the iconic author, who in the process became a close friend. Argott spoke with Filmmaker about meeting Weide at an overseas film festival, going the indie financing route, and how getting close to a subject can sometimes get in the way of actually finishing the film.

Filmmaker: Your press release notes that you and Robert Weide met at a film fest in Kiev, Ukraine only two years ago. What convinced you to team up for this project?

Argott: We were at this film festival in Ukraine run by the State Department. Bob was there with his Woody Allen documentary, and [producer] Sheena [M. Joyce] and I were there with The Atomic States of America. We ended up hanging out and having a really great time together. Probably close to a year later, Bob called me and asked if I was a Kurt Vonnegut fan. I told him that in fact, I was a huge Vonnegut fan, and he asked me if I would consider co-directing his Vonnegut film with him. He explained that he had been working on the film for over 30 years, and in the process of spending all this time together, he and Kurt had actually become very close friends. His pitch to me was to fold the journey of trying to finish the documentary into the film, which I immediately thought was a great idea. What I loved was that you had the Vonnegut doc, but you also had this present-day friendship to explore. What sealed the deal for me, though, was seeing the footage that Bob had shot of Kurt over the years.

Filmmaker: You have a history of gaining intimate access to subjects (sometimes nail-bitingly so, such as with the life-and-death turmoil surrounding the rock star leads of Last Days Here and As the Palaces Burn). I’m guessing Weide’s close relationship to Vonnegut may have mirrored your own struggles – i.e., questions of how close is too close to accurately portray a subject – in your own work. Can you talk a bit about this?

Argott: It’s an intimate process by nature, and sometimes it can get very tricky to navigate. You have to get close to people and, in the case of the two films you mentioned, be there with a camera while the people that you have come to care about are going through a really difficult time. I think you’re always walking that line, and you just have to rely on your own judgments based on the situation at hand. With Bob’s situation, he had realized that his friendship with Kurt was getting in the way of being able to make an objective documentary.

Filmmaker: Your Kickstarter campaign includes offering some of Weide’s personal Vonnegut items for certain pledge amounts. So what exactly does Weide’s attic cache include?

Argott: Bob directed Kurt’s stage play of Happy Birthday, Wanda June in 2001 and Kurt signed the program, which Bob only has two of, as well as a rare poster for the play, signed by Kurt, which there are only four of. Bob also wrote and produced the film adaptation of Kurt’s novel Mother Night, and there are some great memorabilia from that film as well. Take a look at the Kickstarter page for a full list. There’s something for everyone.

Filmmaker: Speaking of Kickstarter, Weide’s worked as an executive producer and director of Curb Your Enthusiasm, and has directed Emmy Award-winning docs on everyone from W.C. Fields to Lenny Bruce to Woody Allen. He even wrote and produced the Nick Nolte-starring, Vonnegut novel-based Mother Night, as you mentioned. Why bother crowdfunding when it seems to me you could just go the Hollywood financing route?

Argott: Yeah, you would think so, right? All I can say is that it’s really tough raising money for films, especially documentaries. When Bob and I first started working together we talked about the idea of Kickstarter, simply because Vonnegut has such broad appeal. Neither of us had ever used crowdfunding, but we felt if there was ever a project that would be perfect for it, this was the one.

Filmmaker: So Weide has not been able to finish his 30-years-in-the-making Vonnegut documentary for many reasons, but he admits to a strong psychological component holding him back, of a persistent avoidance of closure. Does it worry you that perhaps your own film might not be completed? Does that possibility thrill you?

Argott: Oh no, this thing is getting done. It’s too important to be tucked away for another 30 years!