“… If You’re Not Trusting Yourself, You Can’t be Creative”: Mo Scarpelli and Alexandria Bombach on She Does Podcast 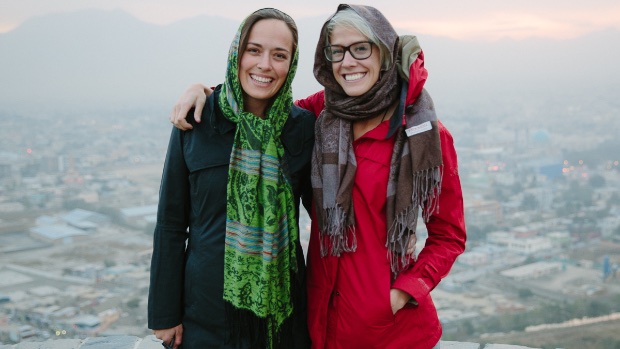 by Elaine Sheldon and Sarah Ginsburg
in Filmmaking
on Nov 19, 2015

Alexandria Bombach, Frame by Frame, Mo Scarpelli, She Does Podcast

Mo Scarpelli and Alexandria Bombach are documentary filmmakers and co-directors of award-winning film Frame by Frame. The documentary follows four Afghan photojournalists as they face the realities of building a free press in a country left to stand on its own after decades of war and rule under the oppressive Taliban regime. The film had its world premiere at SXSW 2015, has screened at over 50 other festivals, garnered several awards, was voted one of the Top 10 Audience Favorites at Hot Docs Film Festival, and is nominated for a Cinema Eye Honors Award for Spotlight Doc. Right now, Mo and Alexandria are knee-deep in an Academy Award campaign for the film. Frame by Frame is opening for a week-long run in New York on Nov 20 at the IFC Center.

Mo and Alexandria are extremely self-sufficient women and filmmakers, both having worked alone on most of their film projects before this one. They started their own film companies and both have carved out their own niches, Mo in the documentary and journalism world and Alexandria in the outdoor filmmaking world.

In this episode of She Does Podcast, we talk about how they came to the medium of film, reporting international stories, filming in Afghanistan, their dedication to stunning cinematography, earning the trust of your subjects, the responsibility and weight of releasing stories into the world, holding onto empathy, the perils of co-directing, how to reconnect with relationships after disconnecting to make a film, and how to maintain belonging and community when living out of a suitcase.

On filming verite scenes without a translator.
Mo: “All the verite in the film, we didn’t really know was going on beyond what you would know if there were no subtitles. You just keep rolling and hope it’s good. In a situation that’s tense, you might not realize the tension right away because you can’t tell what people are saying. You might not realize anything except that there’s a conversation and you’re like, ‘Well maybe this will be useful.’ So you just keep filming and later you filmed so much that you ended up capturing stuff that was really great.”

Alexandria: “There were conversations that people would look very intense as they were having them. You would be filming it and watching this on a long lens and the sound would be really good and the shot would be really good and you’re like, ‘I know this is something good! Listen to how passionate they are!’ Then you get into the editing room and the translator is like, ‘Oh, they’re talking about a rug sale that’s happening down the street.’”

On the importance of making your intentions clear when documenting international issues.
Mo: “You don’t have to say what the end result is going to be, you don’t know, but you have to be very clear with people about your intentions and why you would be doing this. When I first started out, I was young, working with a non-profit and I would have reasons that were really idealistic. And I’ve stripped a lot of that away to be like, ‘Listen. I’m curious. I have no idea what it’s like to survive a civil war in Liberia. Can you tell me about it?’ Going back to truly why you’re there. What about the story struck you?”

On the role and impact of a fixer.
Alexandria: “Our fixer was everything to us. He was our translator, he helped us get access into certain places. Even going down underneath the heroin bridge, he was the first person that a lot of the addicts would see and he just folds his hands in front of his jacket and speaks really softly and everything just calms down. He also did our interviews. He had actually been a filmmaker before the Soviets invaded. This film wouldn’t be what it is without him.”

On filming in Afghanistan and the cinematography of Frame by Frame.
Alexandria: “Their (the subjects in Frame by Frame) photography is so stunning and we wanted the footage to be stunning as well. We hadn’t seen that from films in Afghanistan. In a lot of the films we were seeing, the b-roll was shot out of a car window. There’s such a separation there. Even when you’re watching it as an audience member it’s still foreign because you’re like, ‘Oh you can’t even get out of the car.’ All of these lives are just zooming past you and they don’t matter. The footage is shaky and you’re not translating. You’re not sitting on anything or absorbing anything. So it was important to us to focus on that kind of cinematography that allowed people to absorb this place. And honestly, it was super easy. We were constantly shocked that more films don’t have more beautiful footage from Afghanistan, because it’s so easy to shoot there. There’s this dust in the air so it’s this diffused, golden light.

On the pressure of being a first-time filmmaker with limited resources.
Alexandria: “While you’re in the edit people are like, ‘Oh it’s your first film. Oh, you’re in the edit so it might not happen.’ It’s hard on your ego because you don’t trust yourself because everyone else is reinforcing that you’re a first-time filmmaker, you don’t know anything. If anything now, I trust myself. I think that’s huge because if you’re not trusting yourself, you can’t be creative because it’s such a distraction. If you trust yourself and you can sit with your ideas, you’re able to take feedback better; you’re able to be a better creative collaborator.”

FRAME BY FRAME official trailer from RED REEL on Vimeo.