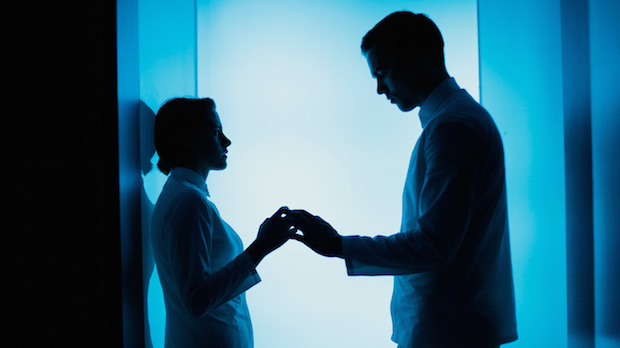 by Soheil Rezayazdi
in Directors, Festivals & Events, Interviews
on Apr 18, 2016

Emotions are a disease. In the world of Equals, responsible humans have eliminated them from their daily lives. That means no more romantic hangups, no more depressive spells, no more sexual tension. People are productive; unchained from their irrational impulses, they lead quiet lives in solitude. Within this universe, director Drake Doremus explores what a budding romance might look like between two office drones, Nia (Kristen Stewart) and Silas (Nicholas Hoult). Executive produced by Ridley Scott, the film represents a leap for Doremus, who has previously directed smaller, character-driven films. Doremus speaks below about his intention to create a sci-fi film that allows you to “turn your brain off and turn your heart on.” Equals will screen as part of the Tribeca Film Festival this week and will be released by A24 in July.

Filmmaker: Equals plays with a lot of dystopian sci-fi tropes that some viewers might be familiar with: intellect versus emotion, a population under harsh control. In what ways do you think the film plays with or subverts these themes?

Doremus: I think a lot of films in this genre can tend to be very cold and intellectually based. I wanted to make something where you could essentially turn your brain off and turn your heart on and make something very warm and emotional.

Filmmaker: The film has a very distinct look — all white and steely blue with flashes of color. How did you and your DP arrive at this aesthetic?

Doremus: The film starts out in a very monochromatic world then as Silas and Nia begin to switch each other on vibrancy begins to enter their world and textures mirror feelings.

Filmmaker: Equals is your first foray into sci-fi after a number of films more grounded in the everyday and here and now. What other genres attract you as interesting challenges as a director?

Doremus: That’s the key for sure. Trying things that feel like a challenge so you can stretch is something that gets my blood going. This was a huge challenge, and I learned a lot about VFX and creating a world so different from our own. Although I’m still very much in a place where I’m asking questions about love and relationships, I’d like to continue to tackle those things in new and interesting ways going forward.

Filmmaker: It struck me that this highly technologically advanced world is devoid of cell phones. How much of a conscious decision was that between you and your screenwriter? I imagine the events of the film would have played out very differently had people been able to text one another.

Doremus: Yes, in this utopian society the idea was that they removed all things harmful to our advancement as a race, so therefore texting and cell phones were a part of that. They wanted to create a Zen-like state of harmony.

Filmmaker: There are clear parallels between the world of Equals and our world in terms of mental illness and medication. To what extent do you think mental illness is stigmatized today like it is in Equals?

Doremus: I think people tend to try and alienate people and things that they do not understand, and that can be tragic.