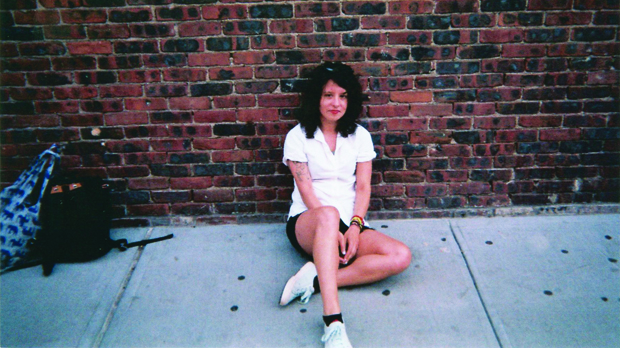 Something of an autodidact, Telaroli began filmmaking after enrolling in the digital cinema program at the computer science school DePaul University. The men running the program “knew nothing,” leaving her “free reign to check out the equipment and teach myself,” she says. She moved to New York in 2005, where she started at the bottom of the career ladder. (“I stood in Herald Square and gave people hand massages.”) Telaroli eventually began getting better jobs while expanding her cinema-going activities, which included visiting the city’s still vibrant repertory cinema. Her film-going habits are reflected in image and video essays at her Tumblr, juxtaposing shot sequences from films old and new, as well as her co-editing of critical dossiers on William A. Wellman and Allan Dwan.

A former member of the Brooklyn Filmmakers Collective, Telaroli began making films with another Brooklyn collective, Meerkat Media, co-directing the politically minded documentary Stages with 11 other people. The nonhierarchical process of consensus-steered filmmaking was appealing and formative; the straightforwardly socially activist results less so. Retreating to Ohio for a month, she wrote 2010’s A Little Death, the near-silent story of an isolated young woman in a Nantucket house. She found the finished film too rigidly predetermined and adjusted her methods accordingly. Traveling Light was supposed to be a narrative shot within the limitations of an Amtrak train trip taken in February 2009, but the projected journey to Ohio with friends who’d enact a loose story was derailed by a snowstorm in Pittsburgh. Responding to circumstance, Telaroli gutted all narrative material and focused on impressions of red light reflected on frosty glass and other optic phenomena unique to the train setting, one of her favorite cinematic locations. Although finished in 2011, Traveling Light screened theatrically in the states and abroad in a fall 2013 DIY exhibition tour organized by the Spanish cinema journal, Lumière.

Shot in one day (Telaroli makes all her work quickly and cheaply, adapting to the restrictions of a nine-to-five video archivist job), her in-post feature Here’s to the Future! has Telaroli’s friends and acquaintances reenacting a scene from Michael Curtiz’s less-remembered 1932 drama The Cabin in the Cotton, their unexplained project broken up by footage taken from all participating. The aggressively edited repetition and tweaking of lines by different performers ends with Telaroli and friends staring at the laptop, laughing and marveling at what they’ve done. Progressing through a day’s controlled situation rather than a planned story, it turns sustainable necessity to its use; like Traveling Light, it excavates planned and accidental visual greatness and humor from quasi-controlled setups. It’s also a rare film about a film set with a female director, an accidental representational anomaly Telaroli’s proud of. “I didn’t set out to do it, but after I did it, I was like, ‘This is not something you see,’” she notes. “I think that’s important.” — V.R.