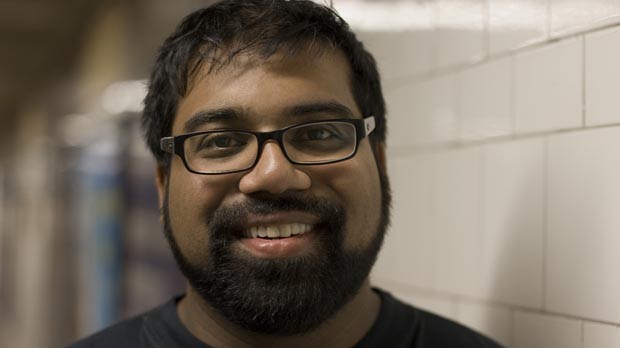 Going from nuclear physics to filmmaking might not seem like a natural transition, but for Ian Harnarine it was an obvious choice. Trinidadian-Canadian writer/director Harnarine, born and raised in Toronto but now a New Yorker, had an early interest in film (his dad was a huge Coppola fan) and applied to one of Canada’s top film schools. “But I got a scholarship to go into science,” says Harnarine, “and I ended up in grad school in physics.” Despite the aptitude he displayed for nuclear physics, he discovered his heart was still with film. “I realized, I don’t really love this as much as everyone else around me loves it.”

Enrolling at NYU’s film school “was actually a pretty smooth transition,” he says. “It was a matter of taking the thing you want to say in your mind or in your heart and trying to communicate it to people.” Ironically, one of his first attempts at communication actually found him keeping a toehold in science, with a short film based in the worlds of physics and academia. But it was his 2011 short, Doubles With Slight Pepper – which won awards at the Toronto Film Festival and the Genies (Canada’s Oscars) – that tapped into something closer to the bone.

“Everyone talks about making films from your heart, and I’ve really taken that to core,” he says. “I always thought, ‘If I have an opportunity to make films or tell stories, I’d try to make things authentic, or show some brown people on film, or tell stories that mean something to me personally.’” That’s exactly what he’s done with Doubles, which tells the story of a young Trinidadian food vendor unexpectedly confronted with his long-lost, wayward father, who is both penitent and gravely ill. “The idea of the film came with my dealing with my father, who was diagnosed with Alzheimer’s. Toward the end he became somebody completely different — it really became as if I was meeting him for the first time. That was the kernel for the film.”

Harnarine’s studies at NYU enabled him to establish a working relationship with one of his teachers, Spike Lee, who ended up executive-producing Doubles. Harnarine is also writing a film with Lee based on a book called Time Traveler, about a real-life physicist who is trying to build a time machine. “I got the writing job before I did [Doubles],” explains Harnarine, “so I had a good rapport with him already. He was always willing to look at drafts of the film and offer comments. He was always very supportive and very giving of his time, which he’s done for a lot of people. I’ve never known someone who gives of himself the way Spike does.”

While Harnarine is busy working with Lee as well as trying to turn Doubles into a feature-length film, he’s giving of his own time in an academic context, coming full circle by teaching both physics and sound recording at NYU.