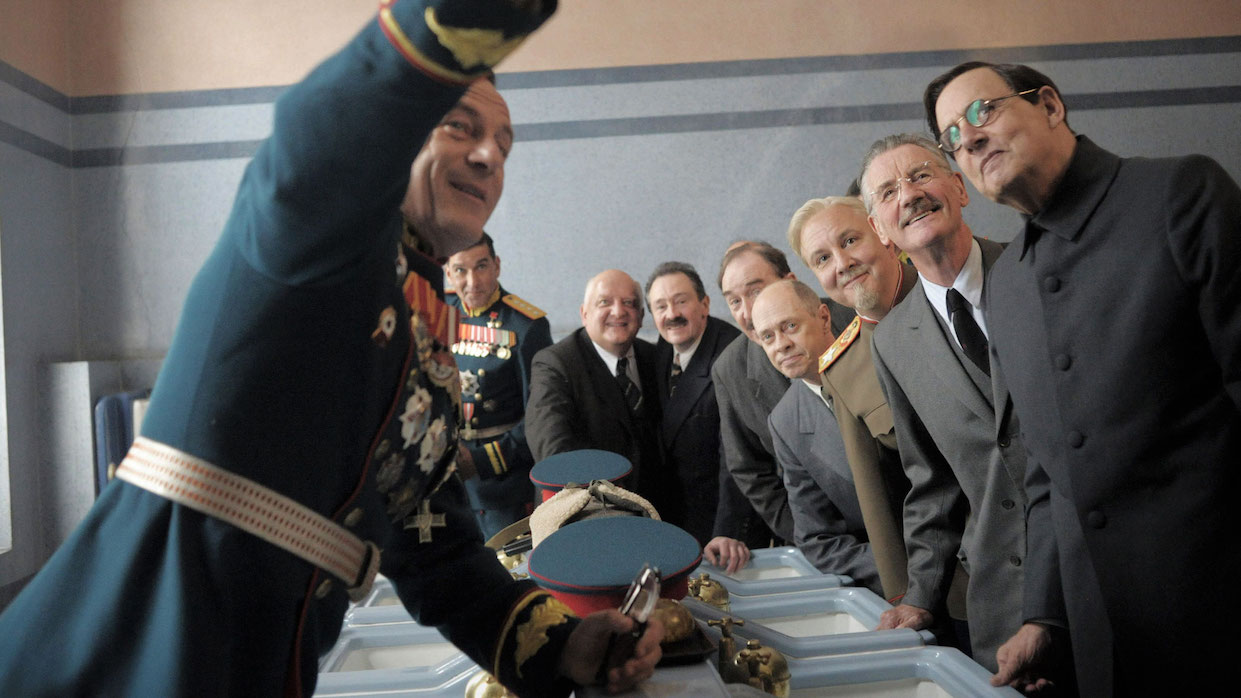 The Death of Stalin

In its own way, it’s an enlightening experience to attend, at least once, a Big TIFF Premiere, which I didn’t do during my first time attending last year. The Death of Stalin premiered in the Winter Garden, a venue on the seventh floor of a building whose ground level houses the Elgin theater; per Wikipedia — in a phrase which Googling only traces to there, so perhaps there’s a different way to refer to this — they are the world’s only surviving “stacked Edwardian theaters.” The Elgin seats 1,561, the Winter 992, so you can gauge the perceived star value and prestige of screenings in both accordingly. At 4:45, with 15 minutes to go before kickoff, the line for Stalin was curving around the block, but the line for Molly’s Game downstairs at the Elgin (which started an hour later) seemed already longer; a very nice young lady asked me where she could best stand to gaze at Idris Elba as he came in, a question I couldn’t answer.

If Armando Iannucci was in any way peeved to be playing the relative b-card to a smaller (sold-out) audience in an (admittedly quite lovely) theater, starting 20 minutes late, he certainly didn’t show it. TIFF’s barrage of pre-screening sponsor ads is notorious for the ill-will they generate in audiences, and while I’m pleased to report that RBC’s little-loved ads in which various people type out their wishes to prove that getting a mortgage or high-interest loan is a dream come true (repeated year after year) have been substituted for a new commercial, it’s still a heavy block of nonsense to sit through repeatedly. Necessary to keep sponsors placated, to be sure, but Piers Handling and Cameron Bailey seemed a little startled to find that the one ad they needed to play before getting on with their introductory remarks slammed immediately into the rest of the sponsor spots. Technical hiccups out of the way, Iannucci came out to make some lay-up pre-screening jokes, noting that after In the Loop and Veep he thought, “Why not do something completely different about a delusional narcissist who terrifies his country?” Journalists aren’t the only ones leaning on Trump for easy applause.

If it seems like I’m taking an awful lot of time to get to the actual film, there’s not much that I have to say about it: I didn’t think it was funny or worth the obvious effort behind it. I like Iannucci’s sense of humour and agree with his diagnosis of the world as refracted through politics, in which life is just a series of power struggles between people whose venality is in a photo-finish race with their stupidity. The Death of Stalin starts with that event and traces the power vaccuum fall-out; as usual, it appears to be meticulously researched. The main problem — for me personally (the early reviews indicate I’m an outlier, though the spare laughter during the premiere means maybe not so much) — is that In the Loop was anchored by Peter Capaldi, while here the main antihero is secret police head Lavrenti Beria (Simon Russell Beale). Even by the standards of Soviet politics, Beria wasn’t exactly a barrel of laughs: he’s noted for his (somewhat disputed but probably true) mass rape of various terrified women, a fact which Beale and Iannucci lean into hard. It’s good that they didn’t soften this or try to play it for disreputable laughs, but that note of terror constantly sours the punchlines being gone for.

Iannucci does his usual thing — politicos jockeying to cover their ass, abetted by copious, oft-inventive profanity — but it plays weirdly to map his usual ensemble play over scenes of people casually being shot in the background or off-screen (timed not for comic punctuation [mostly] but straight-up) and other various sour notes unavoidably baked into the premise. (I guess it’s conceptually funny to have Steve Buscemi play Nikita Kruschev, but probably only conceptually.) The vibe is very Monty Python, especially in the offhand, unperturbed delivery of lines like “Shoot her before him, but make sure he sees it,” but when you score that with lots of period-appropriate classical music and ground it in actual terror — deployed largely in British accents indiscriminately mixed with Americans’ — the elements doesn’t gel. (Exception, though one that makes the Python connection clear: Michael Palin, in a rare late-period prominent part; his bit of possibly-strategic dithering during a meeting is a treat.) Again, I appear to be the rare early reviewer who didn’t dig it, so Iannucci die-hards can probably feel free to ignore me and anticipate.

I’m not a huge Sorkin-head: I came in with Charlie Wilson’s War and have enjoyed pretty much every one of his screen credits since without getting caught up on the back end. Because his characters are impossibly loquacious, it often doesn’t really matter who’s directing: everyone has to talk pretty fast or it’s going to take over three hours to get through everything. There’s a huge stylistic difference between David Fincher and, say, West Wing workhorse Thomas Schlamme, but that’s a detail: the machine basically runs itself. (The exceptions are Charlie Wilson’s War and Moneyball, in which Mike Nichols and Bennett Miller found ways to slow the pace.) So I figured Molly’s Game, Sorkin’s directorial debut, would probably be fine as long as he got a decent crew, let them do their jobs and didn’t make any actively bad decisions, and sure enough.

Sorkin works from a memoir by Molly Bloom, the “poker princess” who ran high-stakes games in Los Angeles and New York and subsequently faced federal prosecution. Sorkin sets up a back-and-forth structure kicking off from the moment the feds raided her house, cutting back to the story of How She Got Here while moving forward as Bloom (Jessica Chastain) and lawyer Charlie Jaffey (Idris Elba) fight the case against her. The basic thesis is that Bloom showed uncommon decency in refusing to name the names of her regular players, either to the press or government, which could have ruined many lives — this is another Stubborn Idealist Vs. System entry, with an unsubtle anti-Wall Street sting in the tail. This is mostly just an excuse to write the usual copious realms of dialogue, and it’s clear from the beginning that Sorkin’s found a character he can relate to: another detail-oriented overachiever who knows copious factoids they casually insert into motormouth jags. The bravura opening has Bloom recapping her teen skiing career, with all kinds of surplus info from her LSAT score vs. the median score of incoming Harvard students to the fact that her downward angle down the mountain is identical to that of the Great Pyramids. No matter how serious matters get, Sorkin can’t stop himself from inserting every last thing he’s ever learned on a Google K-hole deep-dive: the climactic scene begins on the completely unrelated note that we know the center of the universe smells like raspberries and rum (it’s a chemical composition thing). As somebody who’s prone to compulsively overtalking and going down a lot of weird internet rabbit holes, I have a lot of sympathy for his approach.

Sorkin does have some bad tendencies as a screenwriter: his most questionable decision is to reverse-psychologize the entire story of how Molly get herself into this mess by pinning her poor decisions onto an over-demanding Bad Dad (Kevin Costner). People’s parents do often mess them up in directly traceable ways for life — still, it’s a bit of an over-neat explanation for how she specifically started running poker games for Leonardo DiCaprio and Tobey Maguire. (The latter is here fictionalized as…Michael Cera! Which is pretty funny. For more on Tobey, see this.) The climactic faceoff Molly and dad is almost embarrassing, a literal therapy session (dad’s also a shrink), but even here Sorkin can’t help inserting a killer joke with McDonald’s as a punchline: he’s got tossed-off wit for every occasion, even if that doesn’t fit. (I wonder if the retroactive psychologizing is taken from Bloom’s own book.) That’s good, because it means scenes which might otherwise be lugubrious, mawkish or tedious expositional connective tissue have a crackle that smooths things over. There’s a heavy meta-element throughout: Chastain, widely noted as a Very Serious Feminist, is playing a woman who objectifies herself with sexy clothing to make the poker games pop and deals with men whose abuse of power she finds routinely appalling. (And, again on the meta-front, see Cera as the ultimate Hollywood slimeball.) As a director, the only really bad decision Sorkin makes is a bit of sentimental score layered over the moment straight-arrow lawyer Elba agrees to take misunderstand Chastain on as a client — otherwise, he chooses (or signs off on) unspectacular but totally OK compositions, leaning on a team of three (!) editors to bring it home. This is A-OK crowdpleasing fare: for uncomplicated entertainment, I doubt I’ll do better while here.