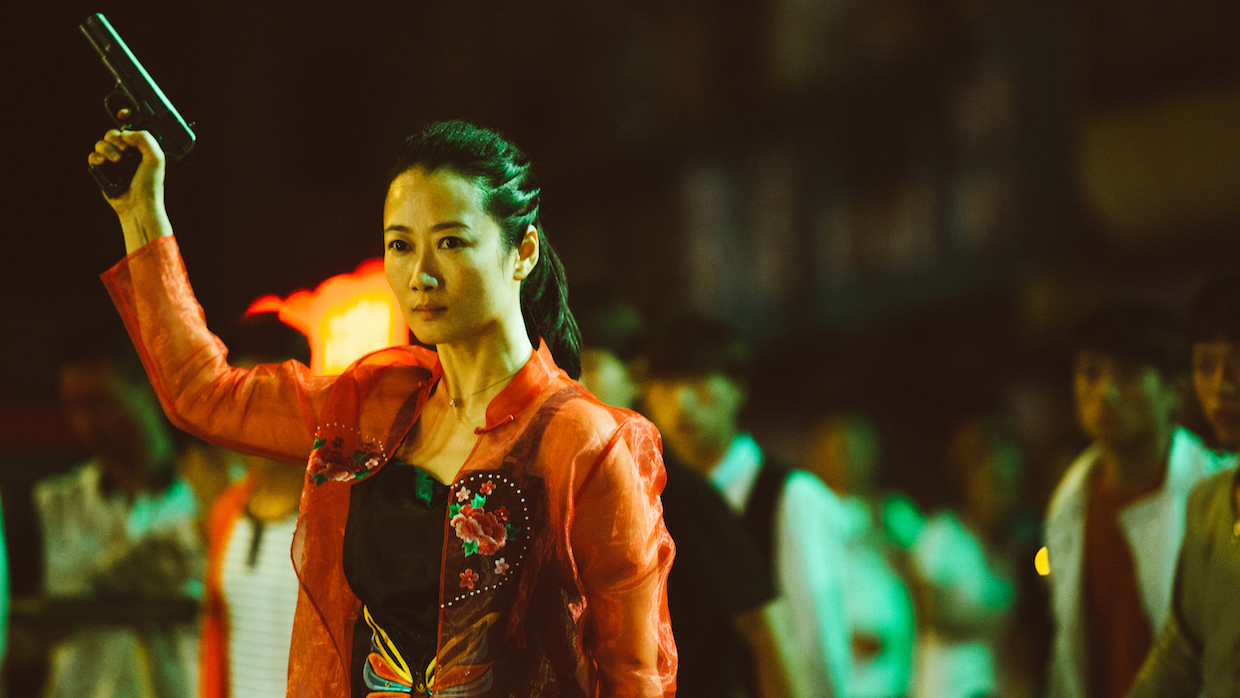 For otherwise underinformed viewers like myself, one of the functions of watching Jia Zhangke’s movies in real time as they came out was pedagogical: because I don’t read the news enough, I’m not sure I would have known about the construction of the Three Gorges Dam otherwise, let alone developed a visceral understanding of its impact. It was Jia’s extended project, in narrative and nonfiction films made during its construction, to continually integrate footage documenting the destruction of houses where some 1.4 million people lived, the subsequent flooding of valley living areas and the fallout from residents’ displacement. These images are hard to shake, and their power is monumental rather than from an appeal to bathos: the real-time tearing down of brick walls, unfakeable detonations, cubic tons of water slowly rising over landscapes never to be seen again.

Jia Zhangke’s most start-to-finish successful film since, by my reckoning, 2006’s Still Life, Ash is Purest White takes viewers back to the dam, whose construction kicks off the middle leg of another multipart structure. Where the multi-part A Touch of Sin and Mountains May Depart fell apart sooner rather than later, Ash holds steady til the end, wrapping itself around Jia’s incredible collaborator Zhao Tao. The film dates itself very precisely: when it starts on April 2, 2001, her Qiao has attached herself to Bin (Liao Fan), a seemingly securely established mob type. This opening sequence climaxes with something new for Jia: an honest-to-goodness action sequence, a fight between Bin and a bunch of challengers that’s tightly choreographed, cut coherently and shamelessly exciting.

The fallout lands Qiao in jail: when she’s released, it’s 2006, the year of Still Life, and her journey to reunite with Bin takes her, via ferry, once more through the Three Gorges area, and hence back through reconstructed terrain, the actual site of which Zhao performed in 12 years ago. The dam has presumably been recreated in some flooded valley or other, and lavish though the budget appears, there doesn’t seem to have been a budget line for building and blowing up some more houses. Still, the effect is wild: Ash (which makes one more leap in its third act to the present) is not unusual in Jia’s work for spanning a considerable period of Chinese history, but it does mark the first time he’s historicized the period he’s covered, in real time, in his own work. If you’ve experienced that primarily (though not exclusively) through his films, as I have, the effect is doubly moving, inevitably reminding the viewer of the aging process. That seems in part to have been on Jia’s mind: “I’m now 48 years old and I’m reaching that moment in my life to think about time as something you can observe in a lifespan,” he says in this interview. “I experience these changes happening in me as well as society.”

All this makes sound Ash sound funereal, but it’s fun, actively designed for its first 2/3 to allow audiences some uncomplicated enjoyment: watching Qiao straight-up grift stupid men, both rich and poor, is a blast. Ash doesn’t get too strained about Jia’s self-anthologizing project, although the purposefully deflating third act is (by design, but still) kind of a slog. I can’t improve on Danielle Burgos’ metaphor for the film’s overall arc as “The Giving Tree of gangster films: Qiao keeps sacrificing out of duty and Bin keeps taking without thinking,” though I still kind of wish this didn’t mean attendantly slowing the film’s pulse. I was moved all the same. Jia does something very canny to bookend the leap from 2001 to 2018: he opens the film with a drone shot that’s clearly not from 2001, then cuts to DV (I think) for the first interior sequence, formally taking us back in time. When the final segment begins, he re-establishes us in the present by breaking that drone back out: we literally hover over the past, then are brought back to the present.

I thought about time a lot as well during Jafar Panahi’s Three Faces. It is, of course, a political imperative to support Panahi, who’s still not allowed to leave Iran and is now almost halfway through a 20-year ban on making movies. It’s also a bit of an artistic imperative: assuming great directors earn a recurring place at the table even after they’ve fallen off their peak (a big assumption you may not agree with, at all), the work that quickly established Panahi’s international reputation was hugely formative for me. When I saw The Mirror, The Circle and Crimson Gold, I didn’t think about anything germane to how the films were made or released (that all were banned in Iran before they came out was inevitably a big part of the narrative upon their release, as in e.g. this poster): I thought about Dirty Harry, with its long shots of San Francisco’s streets capturing an incredible bustling display of everyday life. Some of Panahi’s work was dinged for didacticism, but it never registered that way to me: the way he captured Tehran’s daily hustle was captivating. Under house arrest, Panahi’s gaze was literally restricted and turned inevitably claustrophobic: the title of Closed Curtain should be taken literally, since all the windows in the house where it’s shot have to be closed lest any activity be seen inside. Obviously, cutting off Panahi’s right to visually roam is one of the least important consequences of his prosecution by the government, but it certainly changed his work, generally not for the better (again, I know I’m being churlish).

Three Faces isn’t great (lots of longeurs, some dialogue wheel-spinning, etc.), but—like the preceding Taxi, which took place in the titular…you know—it confirms that Panahi is still allowed to go outside the house, meaning he can literally drive into past modes of filmmaking, which is heartening. I don’t feel like breaking down the plot too much: it basically involves Panahi and actress Behnaz Jafar taking a journey to find out whether a video of a teenage girl seemingly committing suicide is true or not. What this means is a road trip movie, inevitably bringing to mind the many films made by Panahi’s sometime collaborator Abbas Kiarostami involving long-lens shots of cars traveling up and down rural terrain. The film’s self-reflexive in ways Panahi’s been his entire career, but where that quality in his recent films has understandably been about darker concerns (how to make a film that legally should not exist and the personhood status of the director making it), Three Faces at times reminded me of a less politically urgent time in Iranian cinema—one which, obviously, was mythical and entirely in my underinformed perspective, because making seemingly unpolitical films was a necessary endgame around censorship, which acted as the structuring absence. Still, that self-consciousness was playful and not always on-agenda: part of it was about simply wandering and finding non-professional performers who could do something unexpected and delightful on camera. The on-screen persona Panahi has developed tends to be self-effacing, slow to commit to positive judgments, facilitating others while withholding actively advancing any imperatives, a necessarily cautious self-presentation in an uncertain situation. But there’s a moment here so delightful, seemingly documentary but by necessity constructed, that it reminds us how much is whirring unarticulated in his head. Panahi is searching a graveyard for a freshly dug open grave, one that could belong to that ambiguously dead girl; instead, he comes across an ancient woman lying in the ground. What’s she doing there, he asks? She starts loudly denouncing herself, saying she’ll be down there soon enough, she has sins on her head and she might as well get ready, etc. That doesn’t sound funny, but her totally unprompted rant is distinctive and unforeseeable, the seemingly spontaneous expression of a life’s buildup of strong personality, worthy of any professional bit player; for that scene alone, I’m glad Panahi is back out there, reconnecting me with work I saw over 20 years ago.