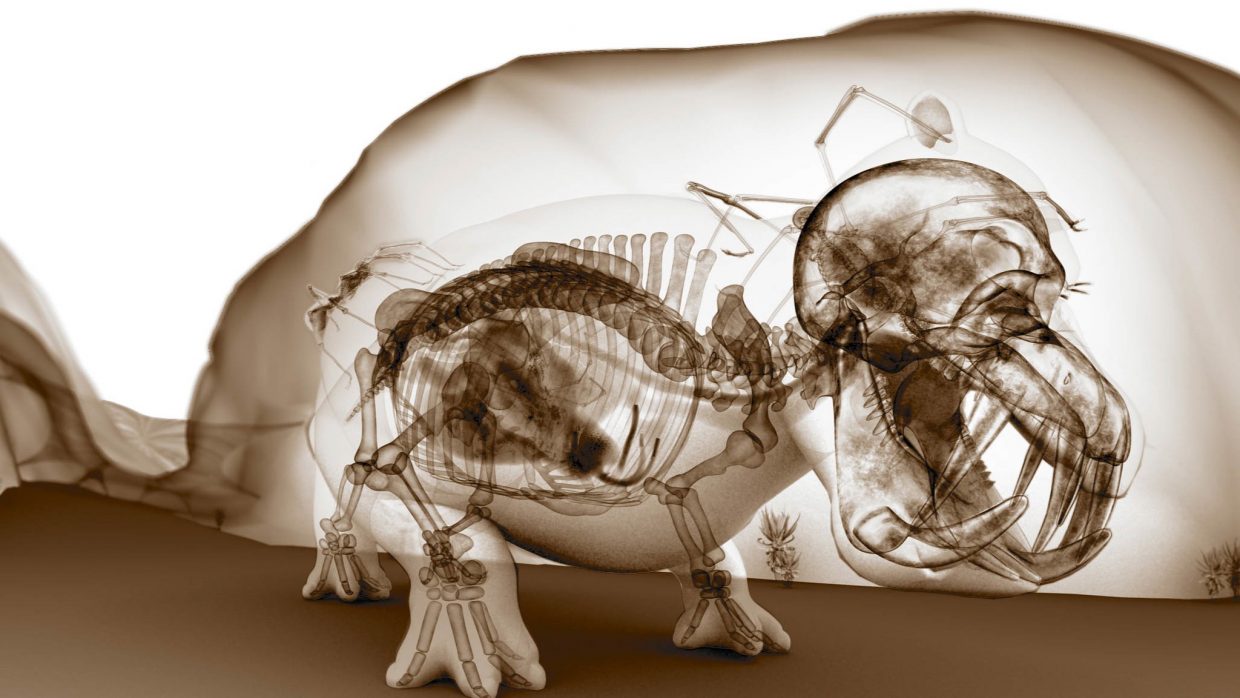 Thirty-two independent experimental and independent media projects comprising the 2020 Sundance Film Festival New Frontier program were announced today by the Sundance Institute. Included in what is often Sundance’s most surprising section are an art/journalism project riffing on the newsreel format by artist and Lemonade collaborator Khalil Joseph; an “under construction” AI based on the thoughts of linguist and critic Noam Chomsky; and a 35mm short consisting of 16,000 cuts. Also included are new works that are the latest installments in the lifelong practices of artist and filmmakers (and Sundance veterans) Lynn Hershman Leeson and Narcissister. Of note too is New Frontier’s screening of Pedro Costa’s latest feature, Vitalina Varela​; with its focus on the physical as well as emotional architecture of memory and grief, it’s an apt work to include alongside so many of these spatially-focused pieces.

This curated collection of cutting-edge independent and experimental media works are by creators who are pushing artistic innovation across mediums that include rocket travel, biotech, facial recognition, mixed reality (MR), smartphone AR, underwater VR, game engines, big data, AI, the human archive, and innovative uses of SMS text & iPhone video capture. Programmers assembled a global slate of work from a mix of invitations and submissions to an open call for work earlier this year.

Comments Sundance Institute President and Founder Robert Redford​, ​“​Technology infuses most aspects of modern life — and is evolving at a historic pace. The New Frontier artists that we showcase are taking completely fresh and thoughtful approaches to how the newest technological formats engage with the ancient art of storytelling.”

Adds Shari Frilot, Chief Curator, New Frontier,​ “Powerful technologies now enable experiences that capture, replicate, and replace “the real.” But it is even more special when the human touch converges with technology, we are provoked to reach beyond what we know to be real and enter into unfamiliar terrain. This transcendence can shift who we believe ourselves to be, where our bodies begin and end, what we are to each other, and who we are ultimately capable of being. The 2020 edition of New Frontier stares down the fear of losing our neighborhoods, and losing ourselves, and reminds us that the future is ​now​ — and because the future is now, the future can be ours.”

New Frontier selections will screen at New Frontier at the Ray and New Frontier Central. “AR dances” will occur throughout the festival, and the aforementioned newsreel piece will also screen across Park City as well as at 11 arthouse theaters across the country.

Infinitely Yours​ / U.S.A. (Director: Miwa Matreyek) ― A live performance at the intersection of cinema and theater exploring what it means to be living in the Anthropocene and the time of climate crisis. A kaleidoscopic meditation that is an emotionally impactful and embodied illustration of news headlines we see everyday.

małni – towards the ocean, towards the shore​ / U.S.A. (Director, screenwriter and producer: Sky Hopinka) — An experimental look at the origin of the death myth of the Chinookan people in the Pacific Northwest, following two people as they navigate their own relationships to the spirit world and a place in between life and death. ​Cast: Jordan Mercier, Sweetwater Sahme. World Premiere

Sandlines, the Story of History​ / Iraq (Director, screenwriter and producer: Francis Alÿs) — The children of a mountain village near Mosul re-enact a century of Iraqi history, from the secret Sykes-Picot agreement in 1916 to the realm of terror imposed by the Islamic State in 2016. The children revisit their past to understand their present. World Premiere

ANIMALIA SUM​ / Germany, Brazil, Iceland (Lead Artists: Bianca Kennedy, Felix Kraus) ― I am animals. I eat animals. A duality explored in a virtual reality experience in which insects will be the future’s main food supply.

The Book of Distance​ / Canada (Lead Artist: Randall Okita, Key Collaborators: David Oppenheim, Sam Javanrouh, Emma Burkeitt, Luke Ruminski) ― In 1935, Yonezo Okita left his home in Hiroshima, Japan for Canada. Then war and racism changed everything. Three generations later his grandson leads us on an interactive pilgrimage through an emotional geography of immigration and family to recover what was lost.

Breathe​ / Sweden, Canada, U.S.A. (Lead Artist: Diego Galafassi, Key Collaborators: Jess Engel, Myriam Achard, Stephen Mangiat) — A mixed-reality application that uses body movement and breathing to immerse participants in the story of air. Recast the ordinary experience of breathing as an immediate, direct link to a complex living world. We are alive to a planet that is alive to us.

Living Distance​ / China, U.S.A. (Lead Artist: Xin Liu, Key Collaborators: Qinya (Jenny) Guo, Gershon Dublon, Reese Donohue) ― A fantasy and a mission, in which a wisdom tooth is sent to outer space and back down to Earth again. Carried by a crystalline robotic sculpture called EBIFA, the tooth becomes a newborn entity in outer space and tells the story of a person in this universe.

Persuasion Machines​ / U.S.A. (Lead Artists: Karim Amer, Guvenc Ozel, Key Collaborators: Jess Engel, , Geralyn White Dreyfous, Marni Grossman) ― How are your likes, shares, selfies, and devices being used against you? By making the invisible world of data visible, this experience will show you how your digital footprint is shaping your reality.

Spaced Out​ / France (Lead Artist: Pyaré, Key Collaborators: Sutu, Mourad Bennacer, Ando Shah, Stephen Greenwood, Atlas Roufas)​ ― ​An underwater VR experience transports you aboard a voyage from the Earth to the moon, as well as within, led by the audio conversations of the Apollo 11 mission. Using special underwater VR goggles and a snorkel, the experience becomes a space simulation immersing all of the senses.

After the Fallout​ / Switzerland, U.S.A. (Lead Artists: Sam Wolson, Dominic Nahr) — In March 2011, an earthquake caused a tsunami and a meltdown at the Daiichi nuclear power plant. The devastating consequences filled the communities in Fukushima with fear of the intangible and split Japan in a distinct before and after.

Go​ / Switzerland (Lead Artists: Sandro Zollinger, Roman Vital, Klaus Merz, Key Collaborator: Thomas Gassmann) ― Searching for stability in his life, Peter Thaler sets out on a hike in the Swiss mountains, from which he will never return. An unprecedented symbiosis of literature and virtual reality, telling a story of everyday and final farewells, and opening the door to eternity a tiny crack. ​Cast: Klaus Merz, Niramy Pathmanathan, Robert Vital, Regula Stüssi.

Hominidae​ / U.S.A. (Lead Artist: Brian Andrews, Key Collaborators: Brian Ferguson, Robert Steel, Kahra Scott-James) ― Against a landscape of X-ray imagery and wild anatomical reimagination, a mother and her children struggle for survival. This experience follows an Arachnid Hominid, an intelligent creature with human and spider physiology, from the birth of her children to her premature death in the teeth of her prey. ​Cast: Phyllis Griffin, Luis Mora, Emily Weems, Kidjie Boyer, Austin Daly, Oliver Angus.

tx-reverse 360°​ / Austria, Germany (Lead Artists: Martin Reinhart, Virgil Widrich, Key Collaborator: Siegfried Friedrich) ― What is behind the cinema screen? What if the auditorium dissolves and with it the familiar laws of cinema itself? As reality and cinema collide, viewers are drawn into a vortex where the familiar order of space and time seems to be suspended.

E-Ticket​ / Hong Kong, U.S.A. (Director: Simon Liu) — A frantic (re)cataloguing of a personal archive and 16,000 splices in the making. 35mm frames are obsessively rearranged in evolving-disorienting patterns, as a Dante’s Inferno for the streaming age emerges, illustrating freedom of movement for the modern cloud.

Guisado on Sunset​ / U.S.A. (Director and screenwriter: Terence Nance) — Missed connection regret at that one late-night spot–the kind you keep playing back in your head but not quite ever remembering right, until it starts to look like something else. ​International Premiere

How Did We Get Here?​ / U.S.A. (Director and screenwriter: Michelle Miles) — A visual exploration of progressive atrophy. A study in how microscopic changes can go unnoticed, but amass over time. Even as these changes become drastic, we sometimes fail to realize anything has happened at all. ​World Premiere

Meridian​ / U.S.A., Italy (Director and screenwriter: Calum Walter) — Footage transmitted by the last unit in a fleet of autonomous machines sent to deliver an emergency vaccine. The film follows the machine before its disappearance, tracing a path that seems to stray further and further from its objective.

Pattaki / C​ uba (Director: Everlane Moraes, Screenwriter: Tatiana Monge Herrera) — In the dense night, when the moon rises, those who live in a monotonous daily life without water are hypnotized by the powers of Yemaya, the goddess of the sea. ​U.S. Premiere