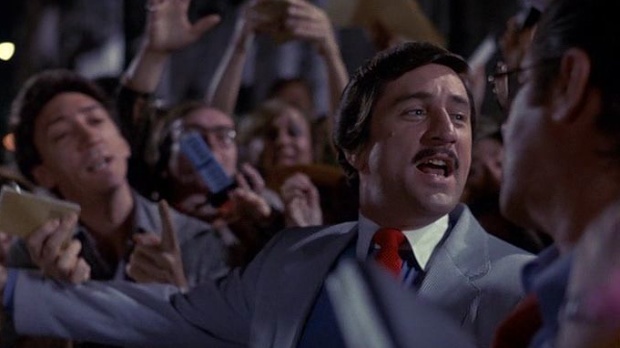 The King of Comedy

“Look at this world we’re living in,” a videotaped Sandra Bernhard said Sunday at the Borough of Manhattan Community Center Theater. “It’s a shit show! Whatever we presented in The King of Comedy went so far beyond our wildest expectations that [the movie] seems almost homespun.”

The occasion was the closing night of the 12th Tribeca Film Festival and its screening of Martin Scorsese’s The King of Comedy, restored in luscious 4K and attended by the director, star (and Tribeca co-founder) Robert De Niro, and, in a surprise appearance, Jerry Lewis, who plays the film’s aggrieved and assaulted late-night talk show host, Jerry Langford. Scorsese’s 1982 picture, a celebrity-culture riff on the same wish-fulfillment pathology dramatized earlier in his Taxi Driver, has aged well. “People say, ‘Were you aware that you were commenting on the culture,’” said Scorsese. “We knew we were commenting on the culture of the time, but we were not thinking that it would blow up where it is now.”

According to De Niro, The King of Comedy, written by Newsweek scribe Paul Zimmerman, was a project he’d been wanting to do since the days of Travis Bickle. “Marty and I were in Cannes with Taxi Driver, and I was shooting 1900,” he said. “I was trying to convince Marty to do it, and he finally did.”

“It was coming at the end of period of filmmaking in L.A. that sort of ended,” the director continued. “Raging Bull [was released] ten days before Heavens Gate, the studio went down, and that kind of filmmaking went out. This film was one of the last vestiges of that type of picture. It just snuck in under the radar. The whole world had changed.”

Asked the moderator, “What was it like doing a comedy?”

“I don’t know whether it’s a comedy or what,” said De Niro.

Said Scorsese, “It wasn’t a comedy, was it?”

Seeing The King of Comedy for probably the third or fourth time, 30 years after its release, I laughed a lot, but I don’t know whether it’s a comedy either. In fact, with the intervening years having magnified and commoditized our fame obsession, the saga of Rupert Pupkin is even more deeply painful than I remembered. I had, of course, recalled scenes like Bernhard’s dinner-table seduction of a bound Lewis, but I had forgotten the squirm-inducing traumas involving Pupkin’s attempts to make it past Langford’s cool blonde assistant (Shelly Hack) and out of his ’70s chic waiting room to Langford.

Pupkin’s “start at the top” grandiosity is behavior many working in entertainment will recognize. He would rather play-act appearances on a replica set of Langford’s talk show built in his basement than develop an act at local comedy clubs that might actually get him noticed by the show’s talent bookers. And, when a chance encounter with Langford fails to produce that immediate booking, Pupkin, aided by an amorous stalker played by Bernhard, turns to violence to get that guest monologue. Pupkin’s explanation as he’s led away by police — “Better to be king for a night than schmuck for a lifetime” — sent a chill through the audience, as we all grasped that the belief is no longer restricted to struggling comedians.

I hadn’t remembered how painful The King of Comedy is, but also how elegant. Coming after the cinematic pyrotechnics of Raging Bull, The King of Comedy is a more restrained film, but, it’s still Scorsese, filled with striking compositions — like the comic-book panel of Bernhard’s gun intruding into frame at Lewis’s head late in the film — and masterful sequences, like Bernhard’s chase of Lewis into the Viacom building, which abruptly switches from smooth tracking shots to expressive handheld.

Said Scorsese, “I decided not to do any camera movement but to create this hermetically-sealed frame, like the kind of television world everyone was watching at the time. An almost antiseptic quality. So it was just the opposite of what we had done in Taxi Driver. Just to let it go and play with the actors. And in wide shots, the comedy looked better — the body language. Keep it wide. These days it’s different, the cuts are so fast.”

Developing the character of Pupkin, De Niro said he dragged Scorsese to the homes of various photographers and autograph collectors, and that they also hit the local comedy clubs, guided by their friend, the comedian Richard Belzer. As for Rupert’s look — the leisure suits and skeezy moustache — DeNiro said, “We went to that store on Broadway, Lew Magram.”

“‘Shirtmaker to the Stars,'” remembered Scorsese.

“It was near the Stage Deli,” continued De Niro. “I remember you, me and Richard Bruno, the costume designer. We looked in [the window] and saw this mannequin with the whole [look] and said, ‘Let’s just do that.’”

“It was amazing,” said Scorsese. “The red tie, the shoes, everything. It even had the mustache. ‘That’s him. Let’s do it.’”

Lewis was the evening’s surprise guest, and he didn’t disappoint, at one point even clowning around wearing a red rubber nose. He entered mid-conversation to tumultuous applause and immediately launched into a bit. “If the comedy comes and is real, if something really happened, it’s going to score better than if you make it up,” he said. “Knowing I was coming [tonight], I said to my staff, ‘This is going to be my chance to finally ride on the subway. I get on the subway train, and we come to a stop and this young guy walks in and sits down. [He’s got] a leather jacket, gold chains out of his nose, leather shirt, pants, shoes — a leather tongue! He’s wearing all of this stuff. And his hair is spiked: yellow, blue, green and white. So I’m staring at him. He said, ‘What’s the matter old man, didn’t you do anything unusual in your life?’ I said, ‘Yes, 20 years ago I had sex with a parrot, and I thought you were my son!”

“I had so many asthma attacks on the picture from laughing,” said Scorsese.

For a moment Scorsese and De Niro struggled to remember how they first met Lewis, but the comedian’s recall was razor sharp. “You don’t remember calling me?” he asked. “I was playing Lake Tahoe. You called me and said you and Bobby thought it would be great if [I] did King of Comedy. I said, ‘I’ll go anywhere in the world for you, Marty.’ Seven, eight months later we started principal photography. And that’s how I met Marty, on the set… and he was thrilled!”

Scorsese said he let Lewis direct one of the film’s most memorable short scenes, Langford’s encounter with an older fan who pulls away from her pay phone call to get his autograph. When she tries to pass the phone to Langford to talk to her cousin, who she says is in the hospital, Langford demurs, having to get to set. Shrieks the woman, “You should get cancer!” “That actually happened to him,” said Scorsese. “I watched how he worked with the actor, the timing. He’d go, ‘One, two, three, turn, line, laugh!’ It isn’t necessarily funny, that scene, but it is the essence of the movie.”

Scorsese also was quick to cite Lewis’s own films as an inspiration. “The films Jerry has made over the years, I still screen them,” he said. “The visionary aspect, the staging, clarity of the frame, composition, timing — natural timing and physical timing — and the characters in the frame — they are timeless. The Ladies Man, I screened about two years ago on the big screen, in 35mm, and it has the cut-away house. When I was doing Gangs [of New York], the opening scene in the old brewery and the camera pulls back — that’s the first thing that came to mind: of course, we had to do what he did. So his work still inspires. Also, I learned a different way of working. I used to make a film and I’d think, ‘Bob’s family.’ So, we’d hang out, talk, and sometimes shoot. But when Jerry was there, he told me, ‘I’m a pro. You want me here all night waiting?'”

Quipped Lewis, “Did Bobby do a film after this one?”

In her taped comments, Bernhard waxed nostalgic. “Marty, Bobby, it seems like yesterday we took over NYC in the Summer of ’81. The summer you discovered me was the summer my life changed. It fell apart, and look where I am now, nowhere. Thanks a lot, you sons of bitches. Remember when Jerry called me ‘Fish Lips.” That was a great moment on set. He brought me a handwritten apology letter. I coveted that letter, but by the end of the day it was missing, I figured he probably stole it back so no one could ever accuse him of apologizing to anybody.”

Scorsese said he discovered Bernhard one night when she performed at a comedy club with Belzer, and that he incorporated elements of her act in that famous seduction scene. Turning to Lewis, he said, ‘You were captive in that scene. She was able to do anything she wanted to because you were taped up. And you didn’t know what she was going to do. She was talking about counting your eyelashes.’”

Lewis’s discomfort at the scene still seemed fresh 30 years later. Said Lewis to Scorsese, who looked increasingly uncomfortable as he went on, “I remember the day we were doing the tape scene, I went to Marty and said, ‘Jerry Langford has such angst and anger, I think when he gets out of the tape he should punch her right in the mouth.’ He said, ‘You want to do that?’ I said, ‘More than you’ll ever know.’ I hit her a shot, and thank god I missed or she’d be dead. She’s the reason they invented birth control!”

Was there improvisation on the film?

Said Lewis, “When you get a script, you see openings where you can do specific things. That’s what happened; we found wonderful places where Bobby and I could be from the top of our heads. The entire scene in my home, there was nothing rehearsed. When I come back with the golf club, all of that was ad-libbed, the whole seven or nine minutes.”

“Even the door being stuck was improv’d,” said Scorsese. “It just happened. You couldn’t open the door.”

Post-production, said Scorsese, “was very long. We had almost one million feet of film. We did a lot of takes, sometimes 25, 30, with the variations of reading of one line. [De Niro’s line] to Shelly Hack — ‘Are you speaking for Jerry?’ — that could be done in many ways, from angry to hostile.”

Did the night’s screening bring back memories?

De Niro took a stab at the question, although you get the sense that he doesn’t spend his nights rewatching past work. “It brings back memories of the period, of that time and what we did,” he said. “I do look at it in a different way. I think Jerry is terrific, which was reinforced watching it tonight. And the stuff that Marty did. Finally, I can watch a movie 25 or 30 years after I do it and can get a little objectivity. Not much, but some.”

“Tonight’s he’s going to see Deer Hunter,” jabbed Lewis, and with that the evening was over.