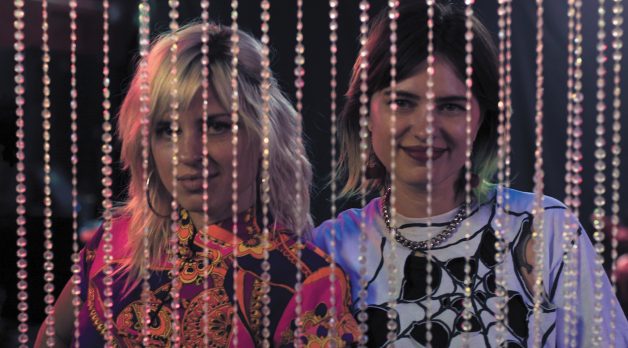 Identical twins Courtney and Hillary Andujar, who first worked as a production design team and now also collaborate as directors, didn’t start out as a professional duo. Born in San Antonio, Texas, they both attended UT Austin before splitting up — Courtney headed to New York, where she worked in print publishing and graphic design, and Hillary to LA, where she worked with fabrics and construction and learned the specifics of art department budgeting. But the sisters say they were always loosely collaborating, whether that was bouncing ideas off each other or, say, having Courtney design graphics for a film Hillary was working on. Five years ago, they decided to join forces officially, and, says Courtney, “It’s been pure magic ever since.” The happy vibe is as much a product of their differences as their similarities. “We have different skill sets and different interests,” continues Courtney. “We’re both design driven. We love creature features, monsters, fun gore, and we both love genre films. Hillary is more Hitchcock, Westerns and psychedelic cinema, and I’m more giallo, punk, DIY, Born in Flames. But we have these weird overlaps.”

Among the Andujars’ rapidly growing list of production design credits — four features since 2018! — are atmospheric shockers like Travis Stevens’s haunted house drama Girl on the Third Floor, Roxanne Benjamin’s woods-at-night thriller Body at Brighton Rock and Emma Tammi’s supernatural period Western, The Wind. All evince a real visual sophistication despite their modest budgets. “As long as there is a lot of thought and intention in the [preproduction] discussion, budget shouldn’t affect design that much,” says Hillary, who cites the 1982 sci-fi film Forbidden World, with its Styrofoam set decoration, as an example of thrifty ingenuity. “Paper can be aged, curtains can be seamed, and those things don’t cost too much. I feel like design errors are more about not being thoughtful in the moment.”

Also rapidly expanding is the sisters’ directing CV, which ranges from the animated ghoulishness of this year’s Final Girls Berlin festival bumper to the new L7 video, all punk psychedelia, to their short, Girls’ Night Out of Body, from the forthcoming Scare Package anthology film. The latter is a subgenre mashup, colliding a girls’ slumber party movie with the giallo (represented suitably by a faceless leather-gloved pursuer). But it all starts with the appearance of an evil talisman — a haunted lollipop — that’d be hilariously silly if it wasn’t realized in such a sublimely creepy way. “We loved the idea of making something so ridiculously girly,” says Courtney. “So much horror happens in girly spaces, like a slumber party. We wanted to make it cute and fun, dripping with pink. And, of course, whenever girls are hanging out in a horror movie, there’s always a stalker following them!”

Then there are three feature projects all vying for a greenlight. The One Who Got Away is a psycho-erotic thriller they’re writing with Winnie Cheung for her to direct. Gray Ladies they describe as “a haunted-house-turned-revenge-film” that explores trauma and is written by Chris LaMartina and produced by Colin Geddes, Katarina Gligorijevic and Robert Menzies. Longest in development is Lovespell, which they pitched at the first AMC Shudder Lab. They describe it as “a teen scream/creature feature that dismantles the fetishization of the teenage crush.” — SM/Photo by Ben Fee