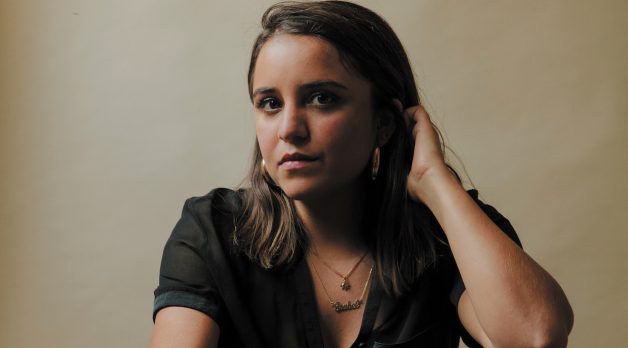 Born in Mexico in the early 1990s, Isabel Castro moved extensively with her family throughout her childhood. After relocating to Argentina and Brazil, the Castro family arrived in the United States—first, Los Angeles, then a predominantly white neighborhood in Connecticut. Assimilation was paramount, and Castro’s high school experience became a constant push-and-pull between needing to fit in and embracing her Mexican heritage. An early interest in painting and photography gave way to a fascination with the still image, providing Castro with a path to exploring her creativity and, potentially, making a career out of it. Still, the financial implications of a life dedicated to one’s passions were daunting. “My dad studied theater but, because of familial responsibilities, eventually went into banking, and I’ve carried and interpreted that for myself,” she says. “Even if your passions lie elsewhere, what is the responsible thing to do in your life?”

In lieu of a religious upbringing, Castro and her siblings attended local movie theaters each Sunday, taking in a steady diet of high- and lowbrow fare. With dreams of being a photojournalist, Castro was accepted into New York University (double-majoring in photography and journalism) and eager to partake in the city’s countless offerings, even when it required the utmost persistence. Castro emailed The New York Times every week over a number of weeks to inquire about an internship in photojournalism, a position she eventually landed. As her interest in how communities deal with forms of trauma grew, the daily grind revealed to her a severe lack of professional care and mental health resources for the photographers capturing these events. Apprehensive about these long-lasting effects, Castro shifted toward nonfiction filmmaking and, for her college thesis project, the issues she most closely identified with.
Castro’s 45-minute documentary, Crossing Over: Stories of Immigration and Identity (2014), began with a phone call to an immigration lawyer in Los Angeles who was friends with Castro’s mother. Specializing in LGBTQ migrants seeking asylum relief within the United States, the lawyer invited Castro to Los Angeles. Once there, she realized her film would ultimately outgrow her thesis. Castro’s documentary follows three transgender women who fear for their safety and reveal intimate details of their struggles with being both an immigrant and trans (obtaining a Social Security number, no less a job, is a nearly impossible task). Edited on nights and weekends while she worked as a producer on the weekly series VICE on HBO during the day, Castro’s film sold to Univision and Participant Media, airing on its cable channel,
Pivot.

While her steady day job at VICE continued to pay the bills, its business practices prompted Castro to depart the company: “I loved the team I worked with, but [the company] was my first real, big-time exposure to the level of sexism and racism that continues to prevail in our industry. The ambitions I had there [were] dismissed. There was a very dismissive culture.” Castro soon became an artist-in-residence at newly formed production company Concordia Studio, an opportunity that eventually connected her to the team at Op-Docs, The New York Times’s short film platform. Darlin, a film about a Honduran family that immigrates to America but is split up by the country’s “zero tolerance” policy, led to a slew of nonfiction directing and producing gigs for Castro on projects for The Marshall Project, Netflix and The New Yorker—the latter, USA v Scott, garnered her and codirector Ora DeKornfeld a 2021 News and Documentary Emmy nomination.

Currently in post-production with the aim of a 2022 premiere, Mija is Castro’s feature debut, following Doris Muñoz, a music manager who supports her family by discovering young Chicano musicians (her most successful client, Cuco, rose to fame in 2018 with the hit single “Lo Que Siento”). Although principal photography began in the fall of 2019, the subsequent pandemic drastically altered her subject’s life and, perhaps unexpectedly, brought Castro’s recurring interest in capturing immigration injustices to the forefront again. Not that she’s the first Mexican filmmaker to tackle the crisis: “I could give you a million reasons why I love Children of Men,” Castro says. “It talks about the topic of immigration in a really nuanced, complicated and, for me, interesting way. It also reveals, in the event of an impending pandemic, the frightening implications for immigrant communities. It’s terrifying.”— EL