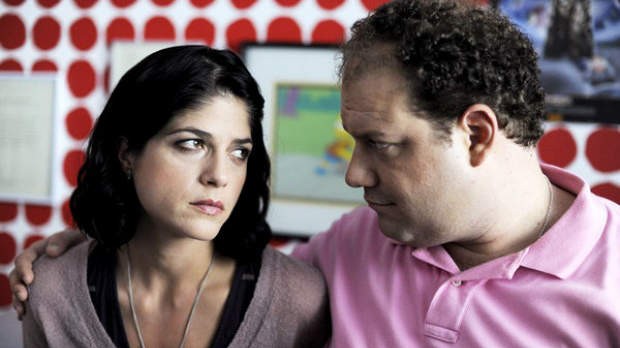 “I want to want you,” says the cripplingly depressed Miranda (Selma Blair) to her suitor with excruciating honesty. The coddled, overweight Abe (Jordan Gelber), a compulsive collector who still lives at home with his parents (Mia Farrow and Christopher Walken), will take what he can get. “That’s enough for me,” he breathes. In Todd Solondz’s Dark Horse, the queasy tale of a 35-year-old man-child who decides to add a wife to his possessions, the writer-director’s dialogue is as sharp as ever, each line an arrow poisoned with sincerity.

Known for colorful, stylized, cynical films including Welcome to the Dollhouse (1995), Happiness (1998), Storytelling (2001), Palindromes (2004) and the masterful Life During Wartime (2009), Solondz makes movies populated by anti-heroes and -heroines that include bullies, pedophiles, and housewives. He has the ability to zero in on the insecurities, weaknesses and existential loneliness of a Robert Altman-like stable of characters with merciless X-ray vision. Like the stories of John Cheever taken to an uncomfortable extreme, Solondz’s “storytelling” gives the lie to the American dream — and suburban paradise, in particular — exposing the underlying tragedy, comedy, and absurdity at its center. (Livia Bloom)