ONE WEEK OUT: “THE TESTED” GOES TO WOODSTOCK

by Russell costanzo
in Uncategorized
on Sep 24, 2010 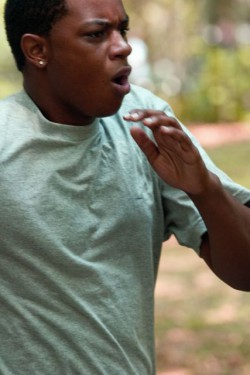 The Woodstock Film Festival is about a week away, and I’m just now beginning to catch my breath.  Maybe because I’m finally about to bring a copy of my film The Tested to FedEx to send it off.  Yes, we’re that film.  The one that is killing itself to get ready in time for the festival.  All-nighters have been pulled, my immune system has taken a beating, and I’ve over-stayed my welcome at not 1 but 2 post houses, but this all seems fitting for a film that’s had such a long journey to it’s premiere.

In fact, to say it’s been a long journey would be a gross understatement.  The initial idea for this story started as a reaction to subway commuters getting their face’s slashed in the mid-90s.  That seed gave birth to the short film of the same name, about a kid’s initiation into a gang (I upped the stakes from slashing a stranger’s face to shooting them in a public place).  That short film won the LA Shorts Fest in 2006 which helped produce this feature in 2008 that expands the story to include the shooting of an unarmed teen and the effect it has on his family, and the cop who did the shooting. (it’s amazing what a free camera package and $5k worth of Kodak stock can do for you… along with a built in 2-year expiration date on both!), the film then went through the 2009 IFP Rough Cut Lab, and here we are now about to premiere in competition at Woodstock.  Just 15 years after the initial idea!

I went to film school, and I’ve directed a half dozen shorts but nothing could prepare me for the horror of frame rate conversion!  I was always the guy talking about how post-production is my favorite part of the process (and usually it is), but I learned a very important lesson on this film:  even though you think you know the basic difference between 29.97 and 23.98 it is absolutely ESSENTIAL that you have a clear post workflow setup before you shoot a single frame.  Oh, and don’t assume the post house you start with is the post house you end with.  Otherwise you might have to re-capture your entire film only to find out it was capturing the wrong way and then need to convert every clip.  And just before you are about to do your HD scan, you just might be required to check the hole-punches of every film reel and count frames to ensure the integrity of the EDL!!  As hard as a process as it’s been I can at least say that I now know much more about post production then I did before, and I GUARANTEE I will not make another film without a post supervisor.

With most of that behind me, I’ve had a moment to look forward to the festival, and wonder how in the world my producer Melissa B. Miller managed to get liquor sponsors for our after-party.  “I just asked”, she modestly replied.   That seems to be the answer for how we got most of the free stuff we acquired for this film.  JUST ASK.  Believe me, and Melissa is living proof of this — stop worrying about being embarrassed, or what might happen if “they” say no… Just Ask.

It’s been really nice getting some pre-fest buzz and I look forward to the Q & A, as I’ve heard Woodstock audiences don’t shy away from asking the tough questions.

And, as of this post,  I’ve emailed our trafficking contact at the festival one more time to let him know it may be a couple more days until he gets his hands on the film.

Photo: Michael Morris in “The Tested”