SAWING A LADY IN HALF AND THE DIVISION OF LABOR 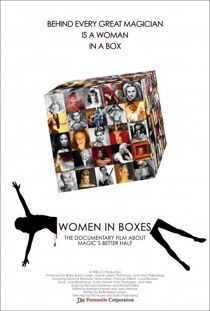 When it comes to the visualization of gender imbalance in the workforce, a woman being sawed in half is perhaps the ultimate metaphor. And that’s not due to any judgement on the imagery inherent in such a presentation but a simple truth regarding the labor involved: while the magician spins the boxes and takes his bows, it’s actually the assistant who, during the performance, does most of the physical work. Writer/producer Blaire Baron-Larsen and directors Harry Pallenberg and Phil Noyes have spun an entire documentary, Women in Boxes, from this observation. From the movie’s Facebook page:

Women In Boxes is the first film ever made that about the Unsung hero behind the Magician. The devoted, if not masochistic Magic Assistant who distorts her body into impossible positions while the magician cuts her in pieces, stabs her incessantly, sets her on fire, crushes her, dismembers her, restores her to life with a dramatic “taa daa” and takes a bow for the credit. Who is the woman who would subject herself to such torture, not to mention the Magician’s Ego?

Heretofore sworn to secrecy, this tough yet feminine group opened their homes, hearts and lives for the filmmakers and revealed the intensity of their involvement, their indispensability to the spotlight; their back-breaking workload, and the reasons behind their devotion to this art…and to the men they serve.

In an email Baron-Larsen sent out last night, she wrote the following:

This is part of my assertive (I am a woman and not allowed to be aggressive) grass roots marketing campaign – putting the destiny of this film into the hands of the masses.

We realize that this film is not just a niche magic film, but a piece about feminine power, relationships, dreams, tenacity and personal passions. It is timeless and it is universal – born out of our love for the community of women inside the world of magic. And it’s funny. And it’s sad.

Thank you for your part in this journey with us – whether it was providing space to shoot, or reading our emails or attending one of the film festivals…this was a film without a budget or a home and every bit of your support has made a difference to us.”

So, if the subject matter intrigues you, visit the film’s Facebook page or, go to Film Baby, where it can be purchased.