“PARTICIPATORY ETHNOGRAPHY” — TORONTO’S WAVELENGTHS 3: LET EACH ONE GO WHERE HE MAY 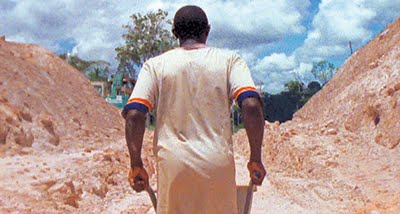 A pair of bare feet was wedged though the gap between seats in front of me, ankles casually crossed and toes silhouetted against the screen, for Let Each One Go Where He May, the third experimental Wavelengths program at this year’s Toronto Film Festival. The screening was devoted to the World Premiere of a single 135-minute 16mm work by American filmmaker Ben Russell?. The film has no translated dialogue and no traditional narrative. It is made up of ten 13-minute shots of two men walking and is described by programmer Andréa Picard as an “intervention” into culture and landscape. This audience was in it for the long haul. ?

“I paid them to participate, and I paid them not to talk,” Russell explained of his subjects, who are followed in Steadicam through an ever-changing, unnamed terrain. Blurring the lines of documentary and fiction, the film is aptly described as participatory ethnography or visual cartography. We follow one or both of two main characters (Benjen Pansa and Monie Pansa) as they travel along dirt roads; on a swaying, dancing motor coach; and on boats drenched in golden sunlight and piled high with luggage. We accompany them though a forest as they clear trees and brush by chainsaw and machete (the latter a lawn-care technique I also recently witnessed in Brooklyn). We see them in rubber Halloween masks like bank robbers or, as Russell sees it, gods — making their way through a local village ritual. ??

The film was appropriately born into a world of satellite maps, live street views, and nonlinear “sandbox” video games, where participants move without internal geographic boundaries. As one audience member observed, at times the characters moving in the middle of the screen seemed superfluous to the mapping of space that is taking place around them.

During a post-film conversation, Russell articulated the rarely acknowledged disjunction between a director’s own deep and concrete knowledge of their subject and the poverty of factual information that the audience might been granted. Initially, he was hesitant to divulge any contextual information to the audience at all, though he eventually explained that the location is Suriname, where he spent two years in the Peace Corps. “I speak the language fluently, and in my mind, there’s a really clearly path for what happens in the film, where it begins and where it ends,” he explained. “But I know that my sense of the film is different from what it actually is.”?

Audience Member: Where were you, exactly?

Ben Russell: Right, where was I? That is even one of the questions — where does this film even take place? What is the culture? Where is this the place? What is its geography ? I know all of these answers, but what’s really exciting for me as a filmmaker is setting up a proposition in which the audience doesn’t know and, in some sense, is forced to address their own assumptions about culture, location, and place. I’ve realized that the things this film is about for me are not necessarily the things that are most important for the audience to locate. The film is a lot more idiosyncratic than my initial vision of it was.

Audience Member: Would you mind articulating your initial vision of the film?

Russell: You know… maybe I do. Yeah — I do! (Laughter) Maybe in a few minutes.

Audience Member: How much of that is staged, and how much is improvised?

You might call it participatory ethnography or documentary. It doesn’t feel like a documentary to me, which is good, though there are elements of that in there. The things that I find really exciting about the film are the things that I didn’t plan and wasn’t able to sketch out. There’s a lot of that happening in there… though I suppose I should say it was all planned. It was all planned! (Laughter)

Audience Member: Was Jean Rouch, and particularly Jaguar, (1967) a touchstone for you in making this film?

Russell: Sure. Although globally, we’re in a moment where communication is happening a lot more rapidly and transference of culture is happening a lot more rapidly. It’s a very different time than when Rouch made Jaguar in the mid-1960s, before there was even portable synchronous sound. I initially thought of this film as being an inversion of that film, where three men known as jaguars travel from a more traditional culture to a culture that’s becoming very “modern” or “Western” (or any sort of bad term we can use to talk about it).

That was not the case at all here. In fact, I think I’ll say now that these are the descendents of runaway slaves who live in Suriname, South America. It used to be Dutch Guyana, and prior to going to Suriname, like a lot of other people, it’s a place I had never heard of, had never held in my brain.

Unlike the “traditional” African culture in Jaguar, one can’t really speak of tradition with the Saramaccans because they’ve only been around for 350 years, and their traditions have always been in flux. In a sense, there is no “original.” Everybody in the film was paid to appear and not talk, which is hilarious, because it’s a really oral culture. Most Saramaccans can’t read or write in Saramaccan because they’re taught Dutch, though they don’t really learn Dutch because no one is really speaking Dutch around them.

??I asked them to not talk because I wanted a specific type of acting. I didn’t want performance, so asking people to not talk was one way of getting that — having them pay attention to me and just think about action and what the path is. I also didn’t want to deal with language as translation. Part of the lesson I learned on my last film was that if there’s a lot of talking that the audience can’t understand, then they’re spending a lot of time reading subtitles, and they’re not as able to watch what’s happening in the frame and onscreen. So this was a strategy for addressing that, though it also creates a kind of aura around the space. It was nice to be in this theater and hear these super quiet moments where we’re there with the characters.

In making the film, I was also thinking of Chantal Akerman’s D’Est (1993), physical cartography of material cultures as the change went from Eastern to Western Poland right after the Fall. There are a few films circling around there, and I would say that ethnography was more of an exciting touchstone for me than thinking about this in the context of Sharon Lockhart or James Benning — folks to whom the film does have a certain allegiance but don’t seem as relevant.

To answer your questions a little bit more now: The film begins on the squatted land — and I’m saying this, but I don’t expect that this information is being transmitted; I don’t expect that this film actually serves as a document of this culture. That said, the film begins in the squats that are outside the capital city where most of the men work as day laborers, and then it ends past the last inhabited village on the Upper Suriname River. The trajectory is, in a certain sense, a retracing of the original flight path of the slaves. Not in a literal sense, because then they didn’t have boats and it took them a really long time to make an escape. That was super gnarly, and this was not that tough.

Audience Member: I have a background that helps me understand and engage with this film, but if I didn’t, it would be pretty inaccessible, mysterious, and difficult to appreciate.

Russell: Yes, I’d be willing to hedge my bets on mystery.

Audience Member: What’s the audience that you had in mind?

Russell: You! (Laughter) And everybody that’s here, or might watch it in the future. This is a film that I made almost entirely by myself. I don’t have a producer; I don’t have a distributor; I don’t expect lots and lots of people to see this. But it’s an interesting question because there’s no dialogue, and there’s no context given, so what you have is what’s transpiring on screen. It depends on how you’re relating to it, how you’re figuring out the action. In my mind, part of the reason why the characters don’t speak, and that there are all these light flares and moves toward the sun and the sky, is that there’s this presence of the gods. I want them to function as mythic figures or archetypes, not as specific humans — which they do, very much so. ??

I’m not happy to say that you take what you can get from it, because I have really specific ideas. I would hope for a nuanced and in-depth reading, and something that’s phenomenal, in the phenomenological sense — your body in relation to these bodies. I think that happens in the bus scene when it’s like those amusement park rides where you see everyone inside shaking around. Here, we’re shaking with them. It’s not a film that I want people to see on their television sets. That would be too small. It needs this kind of space, presence, time, and commitment. I don’t know how many people are excited to watch a two hour-long 16mm film… (Laughter) But those that are are the ones I want.