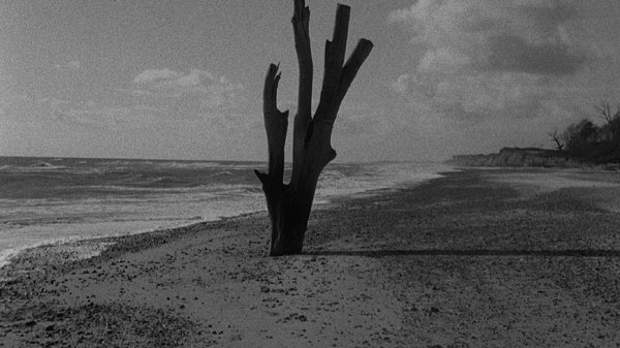 One of the great European literary figures of the past half century was the German writer W.G. “Max” Sebald (1944-2001), a late bloomer who fused essay, history, memoir, and meditative fiction into an unclassifiable weld of eloquently bewitching prose in four major works (Vertigo, The Emigrants, The Rings of Saturn, Austerlitz), all written over the last decade of his too-abbreviated life. Sebald’s solitary narrators, given lightly autobiographical shadings, wander landscapes as far-flung as the Suffolk coast or the Slovakian countryside like melancholic revenants dwelling on the fate of individuals lost to war or time, the operation of memory, and other seemingly arbitrary recollections triggered by the encounter with a physical environment. Although the surfeit of stories and micro histories in his work often return us in unanticipated ways to his principal preoccupations — the Holocaust and the Allied bombing raids that decimated Germany during World War II — Sebald’s wider concerns are the decay of civilization and the array of momentous events to be found in scrutinizing neglected or uninhabited buildings, corroded tools, artifacts, and totems, and the old black-and-white photographs that punctuate his allusive texts, revealing curious details and correspondences but refusing to yield their secrets entirely.

It would require a filmmaker with, yes, patience, to shoulder the task of conveying Sebald’s strangely alluring prose into a cinematic field of reference. A veteran of music docs and rock videos for the likes of Radiohead and Blur, British filmmaker Grant Gee (Joy Division) tackled the challenge of unveiling the Sebaldian universe in a nonliterary medium by focusing on a single book, The Rings of Saturn. He began by retracing the narrator’s walking tour of East Anglia. After the journey, which he made on foot and documented on a Bolex camera, Gee spoke with a number of authors and artists (Rick Moody, Lise Patt, Andrew Motion, Ian Sinclair) who have been influenced by Sebald’s unorthodox style, the blend of fact and fiction that makes such “real” distinctions hazy and perhaps, at least in his dreamy subjective evocations of history, even irrelevant. In his new essay-film Patience (After Sebald), the result of those documentary efforts, Gee blends images of the locations he visited with archive material, stately readings by Jonathan Pryce (Brazil), and ghostly appearances by his aforementioned interview subjects and even Sebald himself, fittingly present only in an audio clip from KCRW’s long-running “Bookworm” program, hosted by Michael Silverblatt, which aired days before the author’s death.

Filmmaker spoke with Gee about literary obsession, walking art, and why documentary can pull off a difficult subject. Patience (After Sebald) opens today at Film Forum in New York.

Filmmaker: What was your first encounter with Sebald’s work and why was it decisive for you?

Gee: I first read The Rings of Saturn and I was mystified by it in the way that just makes you want more and more. I went through the four main books and then the poetry and short stories and then books about him. Partway through the process of becoming obsessed with this literature, the producer Gareth Evans told me he was putting together a festival about artists’ response to the British landscape. We started knocking around ideas and talked about how we both loved Sebald and discussed what would a film about him might look like. Then we thought, What if a Sebald film was based on the walk of The Rings of Saturn?

Filmmaker: So being a Sebald obsessive led you to this project.

Gee: Well, I came to Sebald long after he died and so my thoughts about him were relatively uncontaminated. When I made a film about Joy Division, I could remember when Ian Curtis died, and so there was always that sense of personal loss. Sebald I came to posthumously so that was never part of the equation for me.

Filmmaker: And yet that’s a rather Sebaldian motif, given how much digging and memory retrieval there is in his own work.

Gee: It’s true. The only weird moment I had on that walk was when I decided I would visit his tomb – it was in the area and I thought I’d go see his headstone. So I went to this graveyard while reading the book and I realized that, quite early in The Rings of Saturn, he pays a visit to his own graveyard. A friend of his dies and he goes to the ceremony and walks around this little church yard. You realize Sebald is describing his own tomb — and in nine years’ time he’d be there.

Filmmaker: There’s certainly not only a melancholic but a haunted quality about his writing and his literary persona. It must have been daunting for you to think about translating the book into a cinematic medium. How did you wrap your head around that and feel confidence in doing it?

Gee: [Laughs] I realize now that if it had been a more wide-ranging film about him or one of the other major works, I doubt I could have done it. What made it doable and enjoyable for me was simply the first idea – the subtitle is An English Pilgrimage. I thought, I’ll rewalk the walk he did and I’ll film it. Suddenly it freed me from having any Sebaldian experience at all because I wasn’t attempting to inhabit him or any of that – it was a literary pilgrimage. And it was a very formal art device, in a way. I’d recently been to see an exhibition of the English artist Richard Long. He’s an artist who walks, predominantly. He sets himself quasi-symbolic walking tasks, like picking up a stone from one place and walking 400 miles across the country to put it down and pick up another, or changing stones from one beach on either side of the country. What I’d like to do is almost like that, I thought, an almost arbitrary journey with a program behind it. And the documentary came later. I thought of it almost as a performance. If I’d gone in thinking, How do I translate the Sebaldian universe into a film?, I’d have been crippled by it.

Filmmaker: But you managed to preserve some of his tone and melancholy, and some of the haunting qualities I mentioned before, even in the way you introduce the interview subjects. They fade in and then fade away like old photos – it isn’t conventional talking-head shotmaking.

Gee: Sure. That all goes along with the basic structure. I filmed the walk first – I did it myself with a Bolex and God knows how many rolls of 16mm film stock, and I did it all in one hit. It was a self-contained event for me. And then I edited all of it in sequence – there was only about 100 minutes – so within four hours I already had some kind of film. Any other material, whether archive, interviews, graphics, or music, didn’t have to drive the narrative, so it could drift in and out. There was never a moment where I said Okay, I have to have someone make this point here. Things surfaced out of and submerged back into this landscape footage which I had captured. Structurally, that was what made sense. And now I’m working on a theater production of Rings of Saturn – that’s why I’m in Cologne. Katie Mitchell, who’s a great English director, is doing a pretty large-scale multimedia theatrical production and she’s using my rushes, basically. I’m shooting new stuff as well.

Filmmaker: Rick Moody mentions in the film that for him silk is an underlying thread in Rings, almost the subterranean webwork of the book. Did anyone’s reading of Sebald’s book take you by surprise, after you’d spent so much time with the material yourself?

Gee: No, because it’s an encyclopedic book. I associated it with Gravity’s Rainbow, my other favorite book, and I see a lot of crossover between the two. There are thousands of stories in it, so it didn’t surprise me at all that in interviewing fifteen people you could get fifteen different takes. I can still re-read the book and find new lines running through it — it’s witty in that way. Most interesting to me was Ian Sinclair, who said it’s a “grail quest” because the search for Sir Thomas Browne’s skull right at the beginning is actually the key. He’s a great reader as well as a raconteur and immediately picked out this line. He noticed [skull references] throughout the book. And I thought, That’s a good one!

Filmmaker: It’s equally fascinating, then, that you wound up with your own skull reference near the end of the film – in whorls of smoke.

Gee: That’s true. I hadn’t even realized that myself, but now that you mention it, how peculiar. Maybe Ian’s reference went deeper than I thought.

Filmmaker: You collaborated on the soundtrack with James Kirby aka The Caretaker, who seems the most Sebaldian figure I can imagine in the realm of music.

Gee: Even before I had the notion for this film, when I was thinking of doing a short film about Sebald, one of the first things I decided was the film stock to shoot on – because I thought the grain texture [of 16mm] and the texture of his imagery fit — and I knew I wanted to use James’ music. The scratches and degradation and repetition [from manipulating old 78s] worked perfectly. Halfway through editing the film, I read a review in The Wire of something James had released under a different moniker, and it would have been a perfect review of a Sebald book, too. It was all about memory and entropy.

Filmmaker: Given your own background in music on film – you’ve made music videos for Radiohead and Blur, you shot and edited the documentary on Scott Walker, 30 Century Man – where are you now headed as a filmmaker, considering where the current project has led you?

Gee: Well, I’m 47 now, and as one gets older you become less attached to pop music, unless you can become a historian. I’ve got a kid who’s almost a teenager and I want to hand over fandom to him. It was great to do that stuff but I’m not as personally involved in music as I was even ten years ago. I’ve dearly loved all the artists I’ve worked with on music films, but I always thought it was the other short documentaries I’ve worked on about bookshops and rock climbers that was my main thing. It’s just that nobody watched them! [Laughs]

Filmmaker: What do you think Sebald’s impact on cinema should be?

Gee: There’s one essay in Campo Santo that starts off with a reference to Kings of the Road by Wim Wenders, which is mentioned in Patience, because it stars Hanns Zischler, who wrote Kafka Goes to the Movies. I think it’s the only time he talks directly about movies. Because of the hypertext-y, encyclopedic style of his writing, it’s difficult to translate into conventional cinema. It needs a form that’s much more open. Sebald’s been much more influential on art curators, actually. I can think of three or four exhibitions that have been put together in the UK with explicitly Sebaldian themes. So his writing appeals to curators, collectors, and collagists, maybe, more than linear filmmakers. Yet with documentary, because you can ask questions that the audience can enjoy trying to answer themselves, you can make something more open-ended.