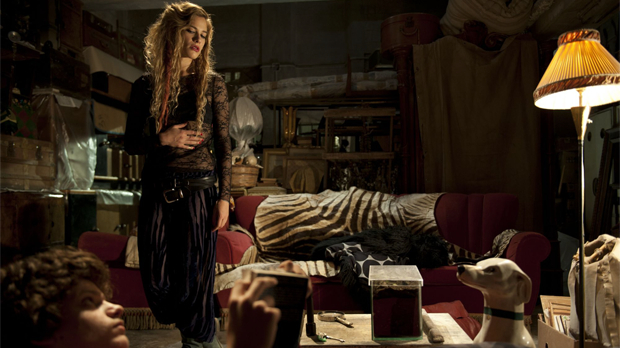 by John Magary
in Directors, Interviews
on Jul 2, 2014

Bernardo Bertolucci, Me and You

Bernardo Bertolucci was barely out of his teens when the first feature film he directed, La Commare Secca, based on a story by Pier Paolo Pasolini, premiered in 1962. In today’s poetry-averse art house environment, his influence surfaces only sporadically — perhaps most clearly in the impulsive, unabashed aesthetics of Paolo Sorrentino — but his filmography remains strong and singular. Nothing feels quite like a Bertolucci film, with its peculiar, poetic fusion of the sensual, the political, and the spiritual.

Bertolucci is 73 now, and, because of a series of botched back surgeries, confined to a wheelchair. His newest film, Me and You, based on a novella by Niccolò Ammaniti, is the first he’s made since The Dreamers 11 years ago. Me and You is a small story about youth and friendship. Its quiet protagonist is fourteen-year-old Lorenzo (Jacopo Olmo Antinori), who, rather than face the swirling anxieties of his parents, his therapy, and a not-particularly-appealing class ski trip, hides out in his building’s basement with a week’s supply of junk food, an ant farm, and some very carefully curated music. The agreeable solitude of this self-exile is broken up by the arrival of Lorenzo’s half-sister Olivia (Tea Falco), a 25-year-old junkie partial to the kind of bold fur frocks Maria Schneider wore in Last Tango in Paris. Me and You is a quiet film about the pleasures of hiding away and the maddening intimacies of family. [Editor’s note: the interview contains information about one character’s fate in the movie and the book it’s adapted from.]

Filmmaker: You’ve said that you felt a spark in reading the novella. What drew you to it?

Bertolucci: After some time, I found myself in a wheelchair, and I was sure I couldn’t do any more movies. Ten years of inactivity and, in a way, depression. Then I read this novella and saw that I could do it. It was simple. Because it was just two characters in one set. I thought, “I can make that. I can do it for sure.” So I was reassured about being able to shoot again.

Filmmaker: It was the simplicity that attracted you? The stripped-down nature of it?

Bertolucci: Yeah. Now, of course, I wouldn’t be able to do something like The Last Emperor. This story of a brother and sister…obviously there is something there that attracts me, but really I was looking so much at the moment when [Lorenzo and Olivia] reunite, and they accept to love each other. When they are dancing in the end. That was what I was looking for the whole movie — that resolution. I didn’t know it when I started shooting.

Filmmaker: Was there a sense of discovery through the actual shooting of the film?

Bertolucci: There must be. There must be a freshness. You have to be able to say to a writer, “A book is a book and a film is a film.” I had to make all the changes I wanted to make. Niccolò immediately accepted that. In the novella, the sister dies. I told him, “No way.” He agreed after he saw the girl [we cast]. In the novella, Olivia the sister is just purely a junkie. I wasn’t interested much in a junkie. I’ve seen them before in movies. Junkies all die. They all die in movies, they all die in books. So, first of all: the sister doesn’t die.

Bertolucci: Major change, yeah. It gives a kind of hope to the movie and to the story. We see [Olivia] in the smile of the boy in the last shot of the film. You know, when you start, you have a novella, you have a script…you have to allow yourself to jump on every idea. For example, Tea Falco is a photographer, so I gave to the character this piece of the life of Tea Falco. And the photographs you see in the movie are all made by the actress. So there is a moment when there is a kind of beautiful confusion between the written character and the one right in front of you, the live character.

Filmmaker: There’s a sensuality among your actors. Even between a brother and a sister, or a mother and a son.

Filmmaker: Jacopo Olmo Antinori has a kind of presence I don’t feel I’ve seen. He seems like a man and a boy at the same time, and his face has sort of the texture of adolescence. Was there extensive rehearsal to develop his relationship with Olivia?

Bertolucci: None of my movies. I cannot rehearse because for me, in theory, it is a waste of time. I prefer that the rehearsal happens in front of the camera, and is absorbed in the shooting. See what I mean?

Bertolucci: Yeah, you know … first of all, I have to love these actors in front of my camera. Many things in the movie come from my relationship with the actors. I have to love them completely, in every way. I have to be able, in the shooting, to more or less have a complete relationship with them. That boy…I saw many boys, of course. To me, the first time I saw him, he looks like Malcolm McDowell. He has hair like Robert Smith from The Cure. He made me think also of Pasolini. I don’t know why. I haven’t discovered why. But the boy is intensely motivated and intelligent. His acting is incredibly prepared. We never did a rehearsal, but inside he was prepared. It was quite extraordinary. And I saw this boy growing up during the shooting! When they ask me, “Why are you doing all these movies with young people?” It’s because of this idea: that Jacopo Olmo started at a certain height, and by the end of the movie he had grown one and a half centimeters–the idea of life happening in front of film excites me.

Filmmaker: Did you relate to Jacopo’s story? I found it funny and honest that, to get his taste of freedom, he hides. He goes underground.

Filmmaker: And I assume that was a set.

Filmmaker: Was it a new process approaching something so confined? You were confined in The Dreamers. Maybe not as much.

Bertolucci: Also in Besieged, we were confined. And Last Tango in Paris also was very much confined to that apartment in Paris. There is something for me that’s nourishing about locking myself in a closed space.

Filmmaker: What are the greatest challenges of this confinement? Do you find yourself trying to create fresh perspectives on the same space? Is it freeing in a way to be so confined?

Bertolucci: Obviously there is something in my condition which made me choose that very story, which made me happy to do that story of confinement in freedom, because my life has become a bit like that. These few years, I’ve spent a long time at home. I have a fantastic wall in a big room where I have a screen — a wall painted in matte white. I have a wonderful 4K projector, and I’m at home and have plenty of time.

Filmmaker: What were some of the challenges of directing from a wheelchair? I’d wondered if it had an effect on your visual planning.

Bertolucci: In the beginning, I asked myself the same question. Will someone notice that I’m not standing? That I’m sitting? But in fact, when I started shooting, I completely forgot.

Filmmaker: What I love about your visual approach is I feel like you’re never constrained by an X- or Y-axis. It’s always somewhere in between. With angles and movement, everything always seems to take a bit of a curve. In technical terms, do you plan shots on set, or storyboard?

Bertolucci: You know, I tried to shoot with a storyboard, but it was impossible. Because I cannot, I don’t want to know before the moment I’m shooting how I will be shooting a certain scene. I want to know it only at the last minute, when we are there: the actors, the set, the camera. Then is the moment. Sometimes my collaborators will be upset with me, because they have no time to prepare, because I can never tell them exactly what I will do. In general, it’s always improvised. Everything is improvised. At the last minute. Just before I say “action.”

Filmmaker: Is there a traditional order to blocking and shooting: watching how the characters are acting, and creating shots around them?

Bertolucci: I’m afraid that very often, maybe too often, my shots are in the middle of the actors. The actors have to adapt to the shot. Like, as if the shots were something independent. As if they exist in the air—out there in some way, waiting for me to call on them. I have to improvise, I can’t plan.

Filmmaker: The act of planning seems to stifle you.

Bertolucci: It’s very difficult for me to plan, yeah. I’m afraid that very often my collaborators have to adapt to this while working. You know, I’ve said this a few times: once I went to meet with Jean Renoir in Bel Air. He was in a wheelchair. I went with Claire, my wife. Renoir for us was like God, and now we were talking with him. He was 80 years old, and in a wheel chair. I thought, “Okay, we love him for what he has done. But he is old now. Maybe he doesn’t even remember what he has done!” But he was so aware of how cinema was changing. Knew everything about the Nouvelle Vague, Godard, Truffaut. And at the end he said something that stayed with me, always when I do a movie. He said, “Remember, when you shoot, to leave always the door open.” On set, reality can come inside, or something you weren’t expecting. In a way it’s what I’m always doing: keeping the door open. For surprises, for something that wasn’t there.

Filmmaker: You’ve said that you felt revitalized by the making of Me and You. Do you have something else in the works?

Bertolucci: I have an idea. I don’t have the shape for this idea, but it will come.

Filmmaker: Where do you seek inspiration? What inspires you now? Are you still primarily inspired by films, or —

Filmmaker: Really? What shows do you enjoy?

Bertolucci: You know, what everybody enjoys. The great ones. Mad Men, Breaking Bad. But I like also TV series which are minor. Not as big, theme-wise. I love the humble TV series. Maybe I like the fact that the story is stretched and stretched and stretched and never ends. I like Rubicon. They did one season. It wasn’t successful, so they killed it. I even love things like The Walking Dead.

Filmmaker: Would you be interested in making a TV series?

Bertolucci: I would be interested in doing a pilot of a TV series.

Filmmaker: Setting the look and feel. One particular strength of a TV series: they let stories breathe. As in Apted or Linklater, you’re able to see characters age.

Bertolucci: It’s wonderful! You see characters aging. You know what I love in TV series? That they can have the luxury of staying on face, on a close-up of a character, for 50 seconds. One minute! Nothing happens! Like the way it used to be in cinema. They have re-conquered time. Now, in cinema there is a convention now that all movies have to be fast. In a series, you don’t have that. It’s a great luxury. It’s very much like cinema used to be in the past, in a way.

Bertolucci: Béla Tarr? Of course. There is the movie with the shot of a horse in the wind. Have you seen it?

Bertolucci: So powerful. So wonderful.