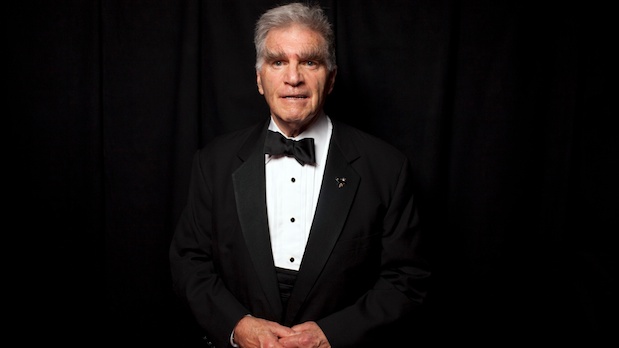 by Sandra Schulberg
in Uncategorized
on Jan 27, 2013

The indie film world is mourning the loss of George Gund, and so am I. This modest, magnificent man often pretended to not hear or not see, yet he absorbed and adopted the interests and needs of thousands whose worlds he crossed.

George Gund’s support for the Sundance Institute, San Francisco Film Society, Pacific Film Society, and Cleveland Film Society is well known and documented, and it was heart-warming to see Robert Redford show up to honor his friend at Gund’s recent memorial. But what is less known, remembered by only a few of us, is that George played a crucial role in launching the American independent film movement by funding the filmmakers’ own self-help organization, the IFP, in its embryonic stage. When American indie filmmakers were being viewed as scruffy and illiterate and irreverent, George was there. When the indie film movement was anything but Sundance-glamorous, George was there. When we composed the unheralded “Eastern Europe” of American filmmaking, George was there. He helped us come out of the shadows just as he helped dozens of East European filmmakers come out of the shadows.

As Tom Bernard recounted at the memorial service in George’s honor on January 25, George inhabited many worlds. Often they coincided. Besides film, another of his great passions was hockey. One year they were at Cannes together, and Tom was surprised to learn George had produced a film of his own, set in Czechoslovakia, that was hidden away in the Market section. The next day Tom called George to ask, “George, why did you make that film, because it’s not very good?” “That’s all right,” George said, “because we were able to smuggle out four hockey players while making it.” That was George at his skulking best, prefiguring Argo.

George’s niece Catherine Gund gave a masterful eulogy, holding us spellbound for more than an hour with her detailed evocations of George’s hilarious and sometimes frustrating foibles. While we sat in Grace Cathedral on Nob Hill in San Francisco, dwarfed within its towering dimensions, the afternoon light sparkled through the skyscraper-high stained-glass windows just as George did. In his deep silent burly fashion, under the famously bushy eyebrows, George sparkled too.

Catherine evoked George’s legendary generosity. He would often shuttle filmmakers around the world in his private plane. I remember one trip home from the Munich Film Festival, a place where Eberhard Hauff and Ulla Rapp brought early practitioners of New German Cinema together with fledgling American filmmakers. It was one of George’s famous haunts. He treated us to late-night dinners at his favorite hotel, and towards the end of the festival would start to sort out who was going where next. You could hitch a ride on his plane, even if he wasn’t on it, as long as you were willing to make some unscheduled stops along the way. No one, the crew least of all, wanted to use the onboard bathroom with its folding cloth door, so that year we stopped to pee in Copenhagen. After a delightful lunch with the pilot and his wife in the Tivoli Gardens, we continued across the Atlantic. After I had set up the IFP in New York, director John Hanson had persuaded me to help him research and produce a movie on the Mesabi Iron Range, and we had settled in the tiny town of Eveleth, Minnesota, which happened also to be the home of the U.S. Hockey Hall of Fame, one of the points on George’s compass. That year, George’s pilot landed us in Hibbing, practically on our doorstep.

After the memorial, the party in George’s honor shifted to the Fairmont Hotel, where others rose to speak spontaneously. Touching and funny tributes came from his son, George Gund IV (aka Crunchy); his grandson, George Gund V; his brother Gordon Gund; and his widow, the indomitable filmmaker Iara Lee, whose Synthetic Pleasures poster is framed in my indie film archive.

Recollections about George have started to pile in. I cite just a few. Joana Vicente, producer of many indie movies and current Executive Director of the IFP, writes: “What a great loss for us all. I met George at a festival in Brazil many years ago. I won’t forget his passion for and dedication to our community. He was unique and will truly be missed.”

Nicole Guillemet, longtime Vice President of the Sundance Institute, writes: “So many fond memories with George — from a trip to Prague to meet with Havel, to the Olympics in Albertville, to the cowboys’ poetry gathering in Nevada, to smuggling lobsters at the June lab and films at Havana Festival… An extraordinary friend, patron of the Arts, and film scholar.”

Rob Nilsson, co-director with John Hanson of Northern Lights and our early partner in New Front Films, writes: “He was a hero to me, a man of the people who knew how to use his wealth for Art at the grass roots. He and Jeanette Etheredge were instrumental in support of the Tenderloin Group which made the “9 @ Night” feature film series with homeless, inner-city residents, actors and all comers in the San Francisco Tenderloin. I’ll always remember him, a man who didn’t say much but listened a lot, and who helped out countless ground level filmmakers, cowboy poets and visionaries of every stripe. Okunrin Meta to George!”

I will be eternally grateful to George Gund for his early support of the IFP, and to his staff at the time, especially Barbara Katz, for finding a way to channel his enthusiasm into our specific programs. But what remains in my heart is George’s vision, especially his desire to champion the underdog; this will endear him to me forever.