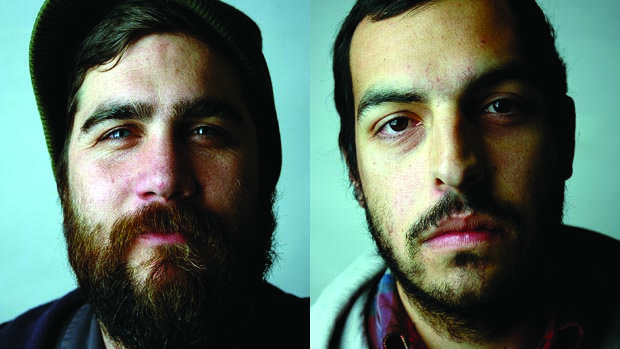 When they met as undergrads at CSU Monterey Bay, Robert Machoian and Rodrigo Ojeda-Beck had different styles but found a third when working together.

“A lot of my early work was pushing what people can process with quick cuts and juxtaposition of image,” Ojeda-Beck says. And “I was really exploring duration,” Machoian adds — “what can be done in a single shot and really raw, raw sound, mainly straight off the mic.”

Their short films together display a handle on classic arthouse film style. Visuals are the key, along with luscious colorful imagery and solitary characters in simple situations, with editing that tells a story that’s deep without much dialogue.

Their goal was to make as many films as they could over the course of a semester, resulting in 14 shorts. Ella and the Astronaut played festivals all over the world, and Charlie and the Rabbit premiered at Sundance 2010. The collaboration is just that: After conversations about an idea, they talk each scene out on location, switching up who is filming and who is directing based on a feeling of the moment. Both share editing duties.

Since graduating, they have made two seasons of their Web series American Nobodies, short films profiling people in small towns. This may result from growing up in small towns — Machoian in King City, Calif. (“6,000 when I was there”), and Ojeda-Beck in Davis, Calif., where his parents relocated to from Peru. For Ojeda-Beck, “growing up in a small town requires you to look, to see.”

“The documentaries we do are secondary to the experience we get having time with the individual people,” Machoian explains. “We’ve learned that Americans are amazingly compassionate people who are looking for such a small amount of joy in life, who aren’t interested in imperialism, greed or whatever else the media wants to label them as. What they are interested in is putting food on the table, a roof over their head and having something in their life that they love to do.” — Mike Plante