On Watching Half of The Disappearance of Eleanor Rigby 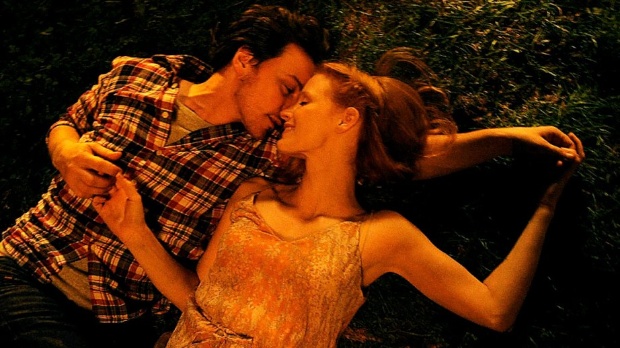 In the Fall issue of Filmmaker that went to the printer last week is my coverage of the 2013 Toronto International Film Festival. But there’s one film — or, rather, half a film — I didn’t write about. I’ll explain, but that involves a detour into a discussion of ’90s experimental theater.

The Sarajevo-based Open Stage Obala’s Tattoo Theatre is a lovely work that follows a couple from courtship to old age, tracing their loves, infidelities and reunions with evocative, unexpected imagery. (Old age, for example, is represented by the actors standing face to audience and covering themselves with flour.) The play is three hours long, there’s no dialogue, there’s a rabbit — a man-sized, magic realist figure who appears in times of distress — and one amazing structural conceit: for the middle hour of the play, during which time the couple separate, the audience is divided into halves. The women are taken to another theater to watch the woman’s side of the story, while the men remain in place to see the man’s side. At the conclusion of that act, the audience is reassembled for the rest of the play, and couples can decide whether to share with their partners what they witnessed or to preserve its mystery.

I produced Tattoo Theater for The Kitchen in 1991, and I couldn’t help but recall the piece when I heard about Ned Benson’s The Disappearance of Eleanor Rigby as it first went into production. Premiering last month at the Toronto Film Festival, The Disappearance of Eleanor Rigby is two full-length features, subtitled “Him” and “Her,” depicting the breakup of a grieving couple’s marriage. He, played by James McAvoy, is a callow young restauranteur struggling to keep his establishment afloat without relying on the support of his famous father. She is an anthropology student played with characteristic depth and luminosity by Jessica Chastain. Both films start with a suicide attempt (hers) followed by the couple’s separation, and the differences between their grieving processes — and the question mark hanging over their possible reconciliation — are explored in each film through a series of generally well-acted and somewhat archly scripted encounters.

The ballsiness of The Disappearance of Eleanor Rigby’s dramatic conceit and production plan — one low-key drama about grief is tough to finance these days, but two? — immediately intrigued me when the pictures went into production a couple of years ago. I got hold of the screenplays, read them both and wondered how the films would find their way into the marketplace. There was talk that the premieres would be split between two different festivals, or that maybe they’d show on successive nights at a single event.

I liked those ideas because they played in an extratextual way with the film’s central thematic issue — our inability to truly know what is in our lovers’ minds. The Disappearance of Eleanor Rigby explores the subjectivity inherent in modern relationships without gimmicky plot twists, simply by separating its lovers and leaving the motivations of these separations under-spoken. Yes, they are grieving, but the sense that there is something more to be said, shared lines that will get the couple back on track, lingers over the picture. See just one of the two pictures and your experience mirrors that of your film’s protagonist. Have dinner later with a friend who has seen the other picture, and you’ve seen the same movie but your points of view have been split.

At Toronto, however, the films were joined into a single picture, albeit with the halves reordered at successive screenings. My schedule one day gave me a window that only allowed me to see half of the film. Normally I’d never go to see a film knowing I’d only watch half, but, remembering Tattoo Theater and my original thoughts on the screenplay, it seemed appropriate.

Can one claim to have seen The Disappearance of Eleanor Rigby after only seeing one of the two titles? I saw Christian Marclay’s The Clock, but did I really see it? I only sat there for a couple of hours, meaning I missed over three quarters of the piece. Yet I feel I saw the work. I’ve played video games and gotten to the end yet clearly missed sequences and side adventures along the way. I’ve read massive books, like, recently, Roberto Bolano’s 2666, and while some sequences are fresh in mind, others have already washed away.

Yet I remember being in the skin of James McAvoy as he stumbled through the East Village, wondering why his wife left him. Like him, I know, but I don’t know… and that’s because I didn’t see the other half of The Disappearance of Eleanor Rigby.

I have no idea whether or not The Weinstein Company, which bought the film, will adhere to the three-hour format or split the films up. I’d love to see them do the latter. Regardless, I will be sure to see the other half of the film. I’d like to know what happened to Jessica Chastain’s character after she left. And I’m content with the time delay between Toronto and the date of that future screening, during which my memory will reorder the narrative even further. In fact, I have a feeling the aesthetic experience will be better than it would have been had I watched the two films back to back. Of course, I don’t know that for sure, and that’s why I didn’t review The Disappearance of Eleanor Rigby in Filmmaker. I’d never do something like that. I mean, I only watched half the movie.