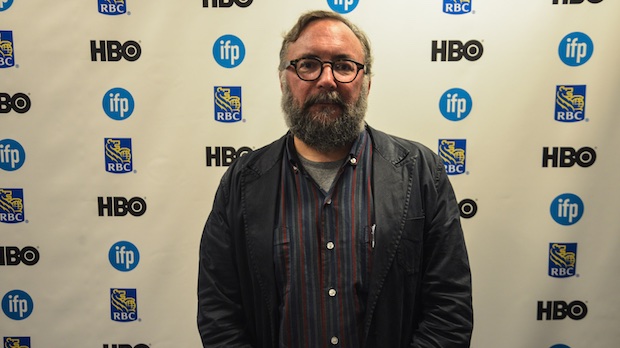 Earlier this summer, veteran producer Mike Ryan — an Independent Spirit “Producer of the Year” nominee as well as one of Variety’s “10 Producers to Watch” in 2007 — sparked a conversation with his Filmmaker article, “TV is Not the New Film.” Acknowledging the declining role of cinema in the broader culture amidst the rise of episodic television, Ryan spent the bulk of the piece detailing strengths of the film medium that are specific to its form. He called on filmmakers to embrace these formal qualities or else just go make TV instead.

Ryan’s declarations sparked passionate agreement from cinephiles as well as pushback from those claiming that TV is capable of formal innovation. As keynote speaker for Day 4 of IFO’s Screen Forward Conference, Ryan delved deeper into the context of his arguments, placing them within the broader space of his take on the future of cinema.

Ryan also expanded upon his article by specifically addressing economic issues in today’s independent film landscape. “Nobody’s in the film business to make money, solely,” Ryan said. “There are other ways to make it.” But while arguing that film’s return on investment goes beyond the strictly monetary — and that investors know this — he still advocated for measures that would increase the ability of films to recoup. Specifically, he called on producers to reject distributors’ customary calls for 18 to 20-year license terms. The length of these terms hail from an earlier era, Ryan said, when the minimum guarantees (MGs) offered by these distributors were larger. With distributors offering lower MGs and then, said Ryan, essentially allowing films to languish after the first two years of the term, a new set of standard terms must be agreed upon. Ryan advocated five-year terms, which would give distributors time to recoup their advances and then allow producers to take the lead in finding new revenue.

In what became an overarching theme of his talk, Ryan stressed the cruciality of identifying, understanding, and dealing with the significant transition that film is currently undergoing in the face of what he termed the “distraction” industry. Younger audiences have lower attention spans than previous generations, he said, acknowledging that, for some, sitting still for 90 to 120 minutes and watching a single movie isn’t a natural act. In today’s entertainment world, cinema is undoubtedly the underdog in Ryan’s view, garnering the least amount of demand as viewers turn to less demanding forms like television or transmedia. In a tone that implied a mourning of the fading dominance of film while simultaneously affirming an unwavering loyalty to the medium, he projected that a smaller film market may in fact result in a favorable eventual fate, one in which economic adversity creates an aesthetic regeneration of sorts.

His predictions stemmed from historical examples of mediums threatened by newer technologies, such as the decline of commercial pulp fiction amidst the advent of television in the 1950s. Yet, he pointed out, the novel as serious literature resurged in following decades. Similarly, Ryan suggested, a less profit-focused cinema could again hit the cultural zeitgeist as directors reassert individual points of view and make works that are “uniquely cinematic” as opposed to large-screen versions of small-screen work. Speaking directly to the filmmakers in the audience, Ryan said that if a story is capable of being imagined in another form, it should be made in that form. “If you are platform agnostic, don’t make cinema,” he said. There has to be a reason to tell a story as cinema, and these reasons are formal, not content-related.

Some members of the audience asked questions challenging Ryan’s almost adamant allegiance to cinema over newer platforms, offering scenarios or outcomes that hinted at their reading of Ryan’s views of cinema’s present as slightly outdated, and of its future as possibly romanticized, or even unrealistic. Wasn’t a film screened at home, on a TV, or on an iPad, still a film? Couldn’t new forms of storytelling, like VR and games, be equally immersive as great cinema? And what about filmmakers who need to think about mediums like TV in order to earn a living?

Ryan admitted to being uninterested in video games and in the plot permutations of transmedia and fan-altered story worlds. Stating that “there is only so much we can do” to engage with today’s younger audiences without compromising cinema’s formal integrity, he urged the true believers to keep believing. Cinema’s unique way of processing narrative will keep it afloat. Rather than focusing on box-office, filmmakers and investors alike must recognize cinema as a valuable cultural artifact.

For some of us, Ryan’s perspective is a reminder of the unique attributes of cinema that we may have become numb to. For others, it may reinforce the ability of new platforms to better complement the viewing habits and narrative preferences of contemporary audiences. Certainly, though, Ryan has most cecreated a conversation around cinema, the very polarizing effect of which is proof enough that it’s a storytelling form that’s far from irrelevant.