“Finding Depth and Detail in the Sound of Falling Rain”: Director Peter Middleton | Notes on Blindness 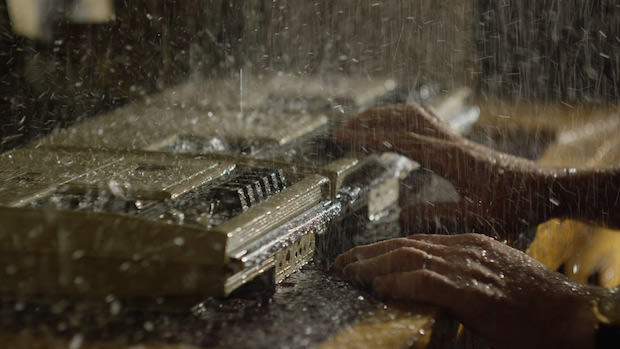 Two hidden stories spring to mind. The first is of John’s decision to share his account of blindness. He never initially intended his diaries to be published. They were, for him, a personal attempt to “understand blindness, to seek its meaning, to retain the fullness of my humanity.” By the end of diaries, John had dramatically reformulated his relationship with sight loss, no longer questioning “why have I got it,” but instead asking “what am I going to do with it?”

It wasn’t until years later that John came to think his account might be useful to others. He would later recall a dream from this period, in which he was falling from a great height towards a rocky coastline. In the dream he crashed in the shallows, caught between the sighted land and the darkness of the blind sea. He understood this dream as a calling – to act as an interpreter between these two worlds, in an attempt to “foster a common humanity.” After the publication of the diaries, challenging marginalization became a key focus of John’s work.

Another story that revealed itself working with John’s account is his discovery of hidden depths in the everyday. Though his diaries undoubtedly begin as an account of loss, they come to be one of discovery. Among these: finding depth and detail in the sound of falling rain, in the feel of the wind, in the appreciation of thunder. It’s an account that makes you pause to listen – and presents the act of perception itself as cause for wonder.