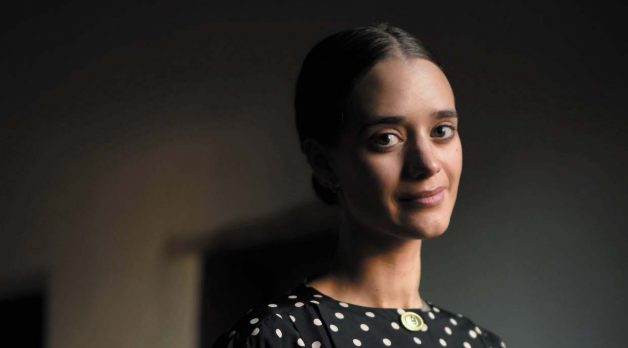 Joie Estrella Horwitz finds beauty in falling asleep at the movies. Once, during a screening of Nina Menkes’s Queen of Diamonds, Horwitz dozed off, only to wake during a 22-minute sequence of the main character dealing blackjack—a scene made all the more surreal and impactful, she says, because of the “vulnerability” of having slumbered. “I used to feel so scared of that space and sleeping, but now it’s a pleasure,” she says. “It’s a beautiful thing to be quelled.”

This liminality, somewhere between feverish dream and reality, forms the stylistic backbone of Horwitz’s work. Currently finishing her MFA at the California Institute of the Arts, the filmmaker feels a personal connection to in-between spaces. “Me and my mom were born in Arizona, but my grandma was born in Mexico,” she says. “I really wanted to make a film about a location—personifying borderland identity and what it means to live between two worlds.” Now in pre-production, Tender Crossings is a docu-fiction hybrid with the scorching desert sun as the booming narrator of a story about a family spanning and separated by the border between Mexico and Horowitz’s hometown, Nogales, Arizona. “In the borderlands, the U.S. government weaponizes the sun,” says Horwitz. “The sun is a crucial character within the film, but it’s mainly dealing with three generations of women who are affected by deportation.” Among these women is Domenica, an 18-year-old whose mother was deported three years ago. The only place where Domenica, her siblings, their mother and grandmother can briefly share time is the border wall—the very structure that keeps them apart. “The reality is that you can’t sever these connections,” says Horwitz. “I don’t want this film to focus on victimization, rather [on] the experience of survival.”

“I wasn’t someone who knew they wanted to be a filmmaker as a kid,” Horwitz says. “I came to it as an intersection of a lot of things I like. I studied photography, geography and creative writing.” Her eclectic background includes work in visual and fine art: “The need to define is a capitalist structure—not having to choose is a form of resistance,” she notes. The power of human connection recurs in her work, including the 2019 short Alejandro y Miguel, a moody, sun-soaked 16mm study of the relationship between a vaquero father and his artistically inclined son (family friends employed on Horwitz’s father’s ranch in Chihuahua). Her nearly completed CalArts thesis film, Green and Brown, focuses on artist and “dear friend” Luchita Hurtado—who was “discovered at age 97—during the final stages of her life.

Horwitz is involved with the Bahía Collective, an international group of filmmakers that hopes to “slowly begin a curatorial project where we bring filmmakers into a residency.” Fellow Bahía member Luis Gutiérrez Arias is developing his documentary Todo lo sólido, about a sinking Caribbean island, with Estrella Horwitz and other Bahía members producing. The project recently received funding through the Sundance Institute Documentary Fund. While Horwitz’s work largely deals with those negatively affected by our political landscape, she is determined to make films that radiate tenderness. “Kindness is political,” she says. “We need more of it.”—NK/Roberto Cowan