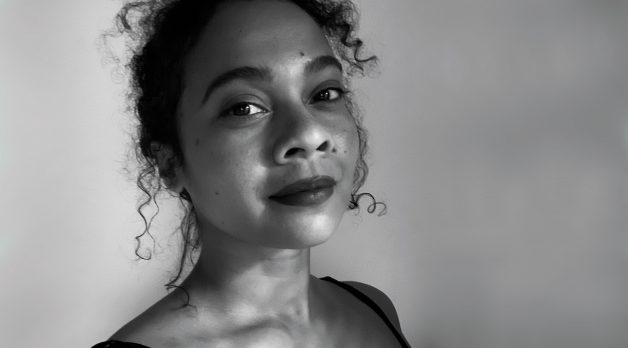 T, Keisha Rae Witherspoon’s 13-minute directorial debut, commences with a moment of near silence. First, there is slow-motion revelry, dancers in marvelous homemade ball gowns and hand-painted R.I.P. T-shirts adorned with the faces of their beloveds, a voice crooning, “We’re here to honor our dead.” The silence that follows is transitional. We see drawings of “T”’s myriad incarnations—Trayvon Martin, the Vitruvian Man, the eponymous R.I.P. T-shirt—before a series of documentary-style interviews with the ball’s attendees, which feel astonishingly unscripted. As Witherspoon dreamt up the opulent, memorial T Ball at the heart of the film—a 2019 Sundance Official Selection and the recipient of a Golden Bear for Best Short Film at Berlinale, among other accolades—it felt possible. “I was thinking about ritual in the Black community, about the popularity of R.I.P. T-shirts,” she says. “I thought, ’We really do find our way back to some sort of creative expression of these things, even if it is death and mourning.’ The vision was to make space for people of color to imagine themselves coursing through grief but having access to something greater. T isn’t about the causal terms of our existence but [about] coming full circle to a deep love of ourselves and community. I felt that if the [T Ball] existed, the community would participate.”

T is set in the historically Black Miami neighborhood Liberty City—Witherspoon is a Florida native—40 years in the future, when the city’s sea levels have risen past the point of denial. The human losses grieved at the T Ball reflect environmental degradation, too. “I’m always looking at patterns, intersections, seemingly disparate ideas,” Witherspoon says. “I can see very clearly how the environment is an offshoot of the human condition.” Her love of speculative fiction might’ve started in childhood, when she delighted in the stark pseudo-realism of sci-fi films like The Fly. Witherspoon studied photography and journalism in college, an artful pursuit that assuaged her mother’s fear of the financial instability of a filmmaking career. Later, after taking on work as a production assistant, “it was a wrap,” she says. “I was hooked.” (Her mother makes a cameo in T.)

Witherspoon’s upcoming film will continue to trace metafictional themes paralleled and rooted in reality. She’s currently writing the project with frequent collaborator Jason Fitzroy Jeffers, her cowriter and coproducer on the 2014 short Papa Machete, with whom she cofounded Third Horizon, a Caribbean artist collective with an annual film festival in Miami. The currently untitled feature is, she says, “a post–alien-abduction sci-fi” whose primary antagonist is Tanya, the leader of a Black alien cult. Tanya’s ideas are “all based on pre-existing Black alien cults,” says Witherspoon. “This, for me, is also a vehicle to explore abduction—the concept of abduction in terms of Black people as it relates to slavery. We’re tying in environmental aspects, as well.” For Witherspoon, who naturally finds and happily, obsessively explores thematic intersections—“they make sense in my head”—fantasy is contour for the truth. “Sci-fi seeps its way into my work, but I was careful to include space for rejoicing and perseverance,” she adds, referring to T. “Beyond survival—I think that’s where we venture into joy.”—Monica Uszerowicz