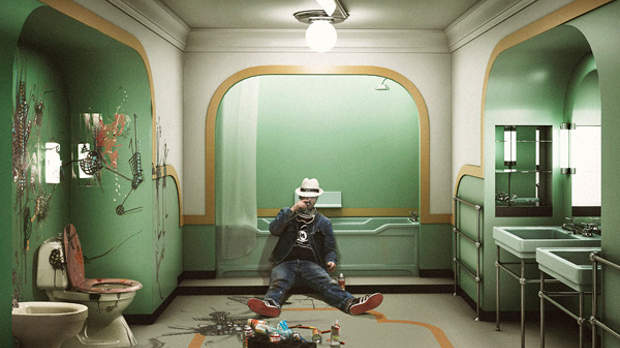 Room 237, Rodney Ascher’s exploration of various obsessive, hyper-close readings of Stanley Kubrick’s 1980 film The Shining, is — like the movie that is its subject — a deceptive film. What at first seems to be a documentary about the specific theories detailed by Bill Blakemore, Geoffrey Cocks, Juli Kearns, John Fell Ryan and Jay Weidner, turns out to be much more — namely, a meditation on the act of interpretation itself and, implicitly, what compels us as human beings to tell stories in the first place.

Without showing the participants as talking heads (we only hear their voices; they never appear on screen), Room 237 becomes a powerful mash up of images — both moving and still — and sounds, as meticulously dissected footage from The Shining, often slowed to super-slow motion, reabsorbs us into the film, this time as detectives. Additionally, dozens of clips from other films appear, including a host of Kubrick films, as well as Capricorn One, Schindler’s List, Demons, Dreamscape, and Disney’s animated The Three Little Pigs. The result is a densely woven, intertextual analysis that reminds us not only about the deep power that movies hold over our imaginations, but is also an example of how the Internet, as a medium, is reshaping the study of film in fundamental ways. For while intensely close readings of films are nothing new, the ability to seize control of a film’s images and study them at close range gives new meaning to Marshall McLuhan’s “the medium is the message,” as the free-associative architecture of the Internet finds itself replicated in the content of film analysis itself.

The pacing and structure of Room 237 — which was shaped not only by Ascher but by producer Tim Kirk as well — seems at first to suggest that Kubrick intentionally included multiple visual and narrative clues and codes to The Shining’s “real” meaning. But as Ascher’s film unfolds, it becomes clear that, as Blakemore notes, “author intent is only part of the story of any work of art, and meanings are there regardless of whether the creator of the work was conscious of them.” Beyond that, there is a bittersweet feeling to these enthusiasts’ passion. The Shining, Ryan says, “is a way of trapping someone like me, who goes looking for clues, and who keeps finding them . . . I’ve been trapped in this hotel forever.” Room 237 is such an affecting and strangely moving film, in large part because it speaks to our inexplicable need for mystery, our desire to be trapped in the labyrinth only so that we can puzzle our way out, picking out bits and pieces of evidence — even if from just a movie — in order to create some coherence and meaning against the chaos of this world. (Nicholas Rombes)