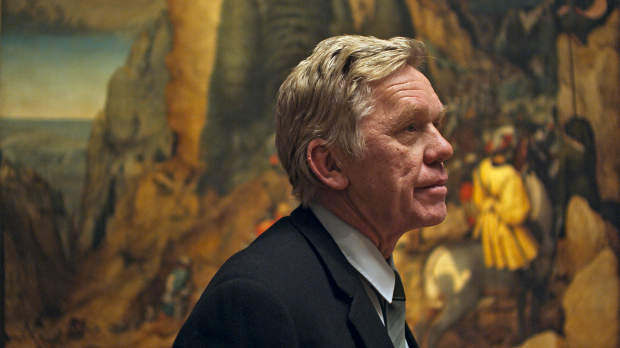 What does it mean, in 2013, to photograph — to reproduce — a painting? Does it, as Walter Benjamin wrote in his 1936 essay “The Work of Art in the Age of Mechanical Reproduction,” drain the painting of an essential “aura,” even as it makes the image itself accessible to a much larger audience? Does it, as John Berger elaborated in his 1972 book and television program, Ways of Seeing, alter the painting’s meaning, rendering the original a symbol of capitalist exchange? Or, in today’s image-sharing world of Tumblr, is reproduction nothing more than whimsical statement of affinity, of a “like?”

One of the many wonderful qualities of Jem Cohen’s latest feature, Museum Hours, is that it respectfully grapples with all of these theoretical thoughts, while also being, simply, a lovely meditation on friendship and the enduring value of culture. Set in and around Vienna’s grand old Kunsthistorisches Museum, Museum Hours introduces us to thoughtful, soft-spoken guard Johann (Bobby Sommer) — a former rock tour manager now content to spend his days gazing at the gallery’s spectacular collection as well as the spectrum of humanity that ambles through it. One such visitor is Anne, played by the Canadian singer-songwriter Mary Margaret O’Hara, brought to Vienna by the serious illness of a cousin, who lingers in a coma at a nearby hospital. Johann and Anne stare at paintings, share beers at a local cafe and observe everyday Viennese life. The film’s narrative trajectory is a gentle one. Cohen’s camera watches our couple, watches what they watch and often just ambles off on its own, capturing beautiful ephemera — shop signs streaked by rain, teen skateboarders cast in shadow under a dark overpass — with the same eye that it explores details in a Renaissance painting. Cohen’s democratization of imagery here isn’t polemical; instead he uses the lessons to be learned from a study of Brueghel to awaken our senses to the world surrounding us.

Recalling that sensation of experiencing one’s own city anew, as when you show it to a visiting friend, Museum Hours is all about, in its own way, ways of seeing. As such, it fits snugly within the sensuous archaeology of Cohen’s body of work, which often blends essay, documentary and fiction — sometimes, such as in Museum Hours, in the same film. (Scott Macaulay)