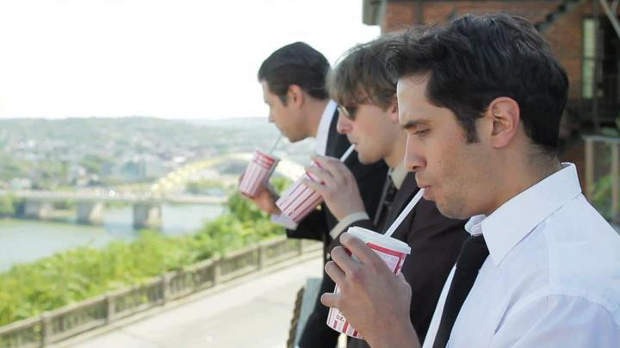 For his micro-budget debut feature Redlegs, which resides comfortably alongside work by Aaron Katz (Quiet City) or Bradley Rust Gray (The Exploding Girl) both tonally and dramatically, Filmmaker magazine contributing editor Brandon Harris (with whom I share this column) returned to his hometown of Cincinnati with three actors and a tiny crew hoping to dramatize the moment when childhood camaraderie dissolves in the face of adult realities and overdue reckonings. Very loosely modeled after John Cassavetes’ Husbands, the film trails three young men — brooding ex-actor Marco (Nathan Ramos), sensitive Willie (Evan Louison), and aggressively obnoxious parking lot owner Aaron (Andrew Katz) — over the course of a long, aimless weekend as they bitch, argue, get high, and wander through town. Having been reunited after the murder of Ricky, a close friend whose absence overshadows their low-key collegial misadventures, the argumentative trio cope by revisiting some of their old stomping grounds and try, with varying degrees of failure, to revive some of their former rapport. Shot by indie actress-turned-cinematographer Miranda Rhyne, Redlegs makes the most of its urban Midwest setting, especially with a gallery of nighttime sequences that brings one character’s anguish and secret guilt into clearer focus. (Damon Smith)