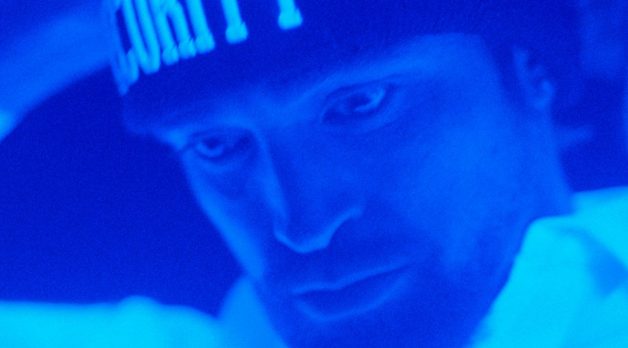 Starring a committed Robert Pattinson — this isn’t one of his kindly offered supporting gigs; Pattinson burns through the screen here — and Benny as brothers, the film is, as Josh quips in our interview, something of “a cross between Dog Day Afternoon and Rain Man.” With a wiry, hectoring charisma, Pattinson plays Connie, just released from prison, who wants nothing more than to rescue his developmentally disabled brother Nick from the stultifying conformity of life in a government-run program. His solution is to involve Nick in a bank robbery, one that goes horribly wrong when a fleeing Nick crashes through a glass door, is arrested and sent to Rikers Island. What ensues over the next day are Connie’s frantic attempts to bail Nick out, which escalate from hustling funds from a rich, troubled girlfriend (an indelible Jennifer Jason Leigh) to bolder, increasingly crazy criminal acts that the Safdies — working with co-screenwriter Bronstein — dramatize with both shock value and the utmost believability. (Good Time is something of an “Oh, shit!” movie — every scene ups the ante before tumbling right into the next even higher stakes situation.) Yet what’s most amazing about Good Time is — amidst its movie-star turns and movie-movie thrills — how of a piece it is with their previous work. Working again with the gifted cinematographer Sean Price Williams (his first ever 35mm feature!) and production designer Sam Lisenco, the Safdies’s eye for forlorn New York street poetry remains undiminished, the supporting characters are hilariously, tragically real, and the film makes the same kind of imaginative leaps and surreal juxtapositions found in their earliest, scrappiest work. (Scott Macaulay)