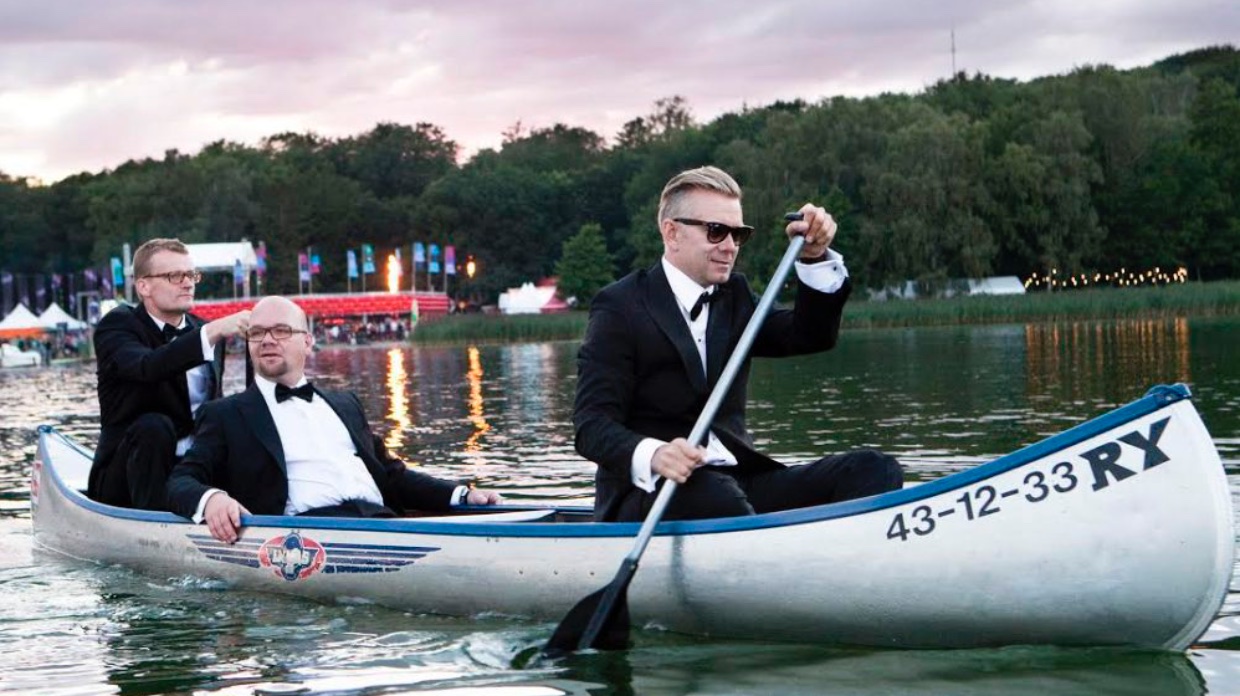 December is proving to be a strong month for comedies on home video, with one of the funniest films in recent years getting a top-notch Blu-ray release alongside a couple of worthy catalog titles. First up is the latest treasure from the good folks at Drafthouse Films, who have released last year’s Klown Forever in both a stand-alone edition and a spectacular boxed set that contains both Klown films and a collectible flash drive containing all six seasons of the TV series that inspired the movies. For the uninitiated, the Danish Klown films and series follow comedians Frank Hvam and Casper Christensen playing exaggerated versions of themselves — think Curb Your Enthusiasm or Seinfeld –- as they get into one (usually sexually) humiliating or compromising circumstance after another. Klown Forever follows the guys as their friendship frays and Frank follows Casper to Hollywood, a premise that facilitates both outrageous culture-clash gags and a series of awkward and hilarious celebrity cameos. The Klown franchise has been described as “an unholy hybrid of Larry David and Lars von Trier,” but that only scratches the surface of this brilliant series, which is too singular and gut-bustingly funny to be easily categorized. For the last several years Drafthouse Films has been one of the best companies around importing both audacious genre cinema and outrageous comedy from other countries; Klown Forever is perhaps their most flat-out entertaining release to date.

In addition to Klown Forever, I’d like to recommend a pair of 1980s titles from Kino, Moving Violations and a Porky’s II: The Next Day/Porky’s Revenge double feature set. Admittedly, the latter disc’s value is more nostalgic than aesthetic, but both are an awful lot of fun and look and sound terrific on these new transfers. Moving Violations (1985) is co-writer and director Neal Israel’s follow-up to his hit comedy Bachelor Party, which established Tom Hanks as a viable big screen lead and cemented Israel’s place as a major figure in American comedy after co-writing and directing the brilliant Americathon and co-writing Police Academy and a couple of innovative Steve Martin television specials. (He and his frequent writing partner Pat Proft also had a hand in another terrific 1985 comedy, Martha Coolidge’s Real Genius.) Israel’s voice was a unique one at the time; he made broad comedies that skated up to the edge of vulgarity but were ultimately sweeter and more generous than they were tasteless. The hostile undercurrent of so many ’80s movies, including the Porky’s series discussed below, is relatively absent from Israel’s work, and as a result his movies have aged surprisingly well – their good-natured enthusiasm is irresistibly infectious. Moving Violations, an ensemble farce about a group of traffic school misfits photographed by future P.T. Anderson collaborator Robert Elswit, is emblematic of Israel’s talent for comic set pieces that are perfectly calibrated to appear messy and chaotic; his is an unassuming, dare I say subtle, gift that wasn’t acknowledged at the time of Moving Violations’ release (it got mostly rotten reviews), but his modest style yields many pleasures for the viewer.

When director Bob Clark was killed by a drunk driver on April 4, 2007, most of the obituaries focused on his role at the helm of one of the most beloved family films of all time, A Christmas Story. While Christmas Story is almost inarguably Clark’s best film, it wasn’t his most influential; that title would have to go to his 1982 opus Porky’s, a combination of coming-of-age saga, vulgar scatological comedy, and fairly muddled social critique that spawned a new form of teenage sex farce. Though Animal House established many of the genre’s ground rules, Porky’s stripped the formula down to its essentials and was such a massive success that it inspired dozens of inferior imitators (remember Spring Break and Hardbodies?), until American Pie reinvented the form in 1999. It also spawned two surprisingly interesting sequels of its own, Porky’s II: The Next Day (1983), which was directed by Clark, and Porky’s Revenge (1985), which Clark had nothing to do with.

Watching Porky’s and Porky’s II now, the most striking thing about them is how idiosyncratic and personal they are – although Clark is essentially telling a simple story about a group of high school guys obsessed with getting laid, he uses that premise as a line on which to hang digressions about everything from anti-Semitism and racism to the pleasures of violent revenge. The Porky’s films are remembered as no-brainer comedies, but their tone is far from light; there’s real anger and unpleasantness running throughout the pictures, and not just in the scenes depicting racial, sexual, and religious prejudice during the 1950s period in which the films are set. The most famous sight gags, such as the first film’s infamous shower scene in which a group of guys stick their eyes and other body parts against and through a hole in the girls’ locker room, all revolve around pain and embarrassment — something that can be said about most comedy going back to Chaplin’s day, but which reaches insane extremes in Clark’s parade of humiliation.

Ironically, however, the movies’ retrograde attitudes about sexuality are balanced by a more sympathetic and empowering view of young womanhood than one finds in most of Clark’s imitators (a low bar, but still….). While the Porky’s movies do contain a mannish, castrating psycho in the form of the boys’ nemesis, Miss Balbricker, they also star Kaki Hunter in an underrated performance as Wendy, a friend of the boys who is not only their equal but their intellectual and sexual superior. She’s the wittiest and most aware character in the films, and her alleged sexual experience is viewed as neither threatening nor sluttish but as a simple fact of life. And as Clark and others have rightfully pointed out, ultimately the guys in the movie are the ones who are most foolish and powerless as they run around with their penises flapping in the wind (has there ever been a teen sex comedy with as much male nudity as the original Porky’s?).

Porky’s II perpetuates the original film’s combination of incongruous tones by telling a story that includes crass sexual pranks, the KKK, and religious extremism, among many other topics. Director James Komack’s Porky’s Revenge, on the other hand, is closer to the public perception of the series than either of its predecessors: it’s an escapist sex romp with a lot of silly but amusing set pieces and a total lack of social commentary. If it’s far more conventional than either of Clark’s films, in its own way it has probably aged a little better and is more generous toward its characters (it even gives Miss Balbricker a tender love story!). It also has a killer soundtrack, with music by Dave Edmunds, Carl Perkins, and George Harrison, among other legends, and is a must for rock and roll aficionados as well as teen sex comedy enthusiasts — the music alone justifies Kino’s Blu-ray upgrade.