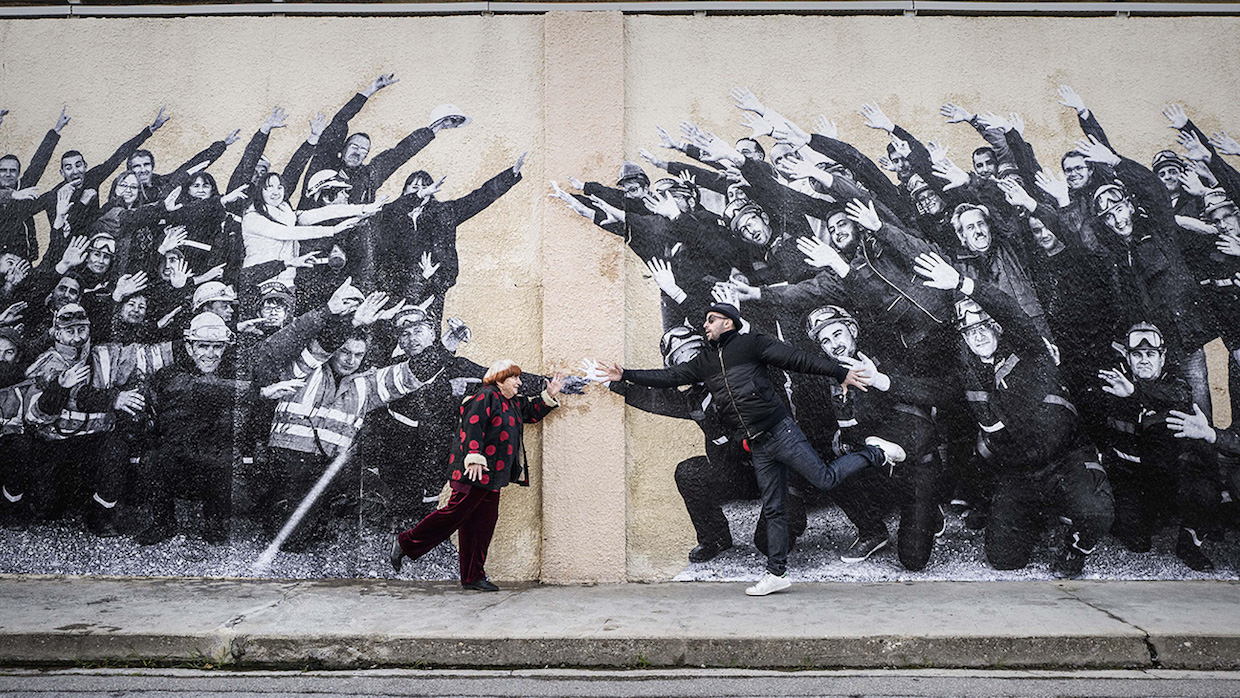 Seventeen years ago, Agnès Varda filmed her own hand in horror. The blotches, the wrinkles, the bulging blue veins: These may as well be the hands of a stranger. “My hair and my hands keep telling me that the end is near,” she says in her 2000 film The Gleaners & I. Despite the forebodings of death in Gleaners and 2008’s The Beaches of Agnès, Agnès is still with us; what a gift it is to have her still around. Varda, now 89, has partnered with French artist JR to co-direct another freewheeling, full-of-life documentary. Faces Places overflows with the humanity, curiosity, and child-like humor that makes Varda’s late-period doc work so irresistible. Like Gleaners, the film is a showcase for the souls Varda meets as she travels France and a dive into her own remarkable psyche.

For the first time in her 60-plus year career, Varda here works with a co-director, the affable JR. Together, the two form a crack odd couple: the vibrant upstart and the languid sage. The pair acknowledge that, to a certain extent, they’re playing parts for the camera. JR strikes the pose of a tech-savvy youngster with energy to burn; Varda sits back as a wise veteran with nothing left to prove. The two set out on a meandering road trip to create large-format photo murals – a JR speciality – across France. They tour farms, factories, and small towns to meet locals and create public artwork for the people who live and work in these spaces.

“Chance has always been my best assistant,” Varda says early in the film. Faces Places, as such, hits the road without much of an itinerary. The film plays as a collection of mini profiles of the people Varda and JR meet on their charm offensive. The two then craft massive works of art in their honor. The film runs a breezy 89 minutes, and it has the addictive appeal of a home renovation TV show: our hosts arrive, they meet the owners, and they leave the place better than they found it. I could watch season after season of these two in action.

In 2017, we tend to think in pictures and videos, rewiring our brains to harvest the sights around us for likes and shares. There’s a toxicity in all this, but Faces Places finds the joy in our selfie-saturated age. Varda and JR create IRL images that bring delight to their subjects and the communities around them. Tourists take selfies before their monuments, sure, but they exist foremost to enliven real neighborhoods. Varda and JR channel our image obsession for a collective good, not a nihilistic pursuit for digital points. They’re not doing it for the ’gram.

Faces Places downshifts in its final act toward a conclusion that, to quote JR, “challenges the narrative structure” of the film itself. These final moments strike with unexpected pathos, reminding us of why we record images in the first place: to capture the people, places, and moments we know won’t last forever. In this way Faces Places celebrates life and artistic creation, but it also offers a warning: Savor the moments before all you have left are the images on your phone and in your head. Even those won’t last forever.

The Rape of Recy Taylor is one of 18 films to screen in the Spotlight on Documentary series at NYFF ’17. The film, from doc director/producer Nancy Buirski (The Loving Story, By Sidney Lumet), marks the first cinematic telling of a horrific crime that took place in Abbeville, Alabama in 1944. On her way home from church one September night, Recy Taylor was abducted by a group of seven white boys and gang-raped in the nearby woods. Taylor survived the night and went on to face her attackers multiple times in court. Each time, the all-white, all-male juries refused to indict any of her rapists.

Buirski has few images of Taylor – let alone moving images – with which to depict her. She solves this problem with the film’s most inventive gambit: the use of “race films” from the first half of the 20th century (a title card defines these as “films made by mostly black filmmakers with black casts for black audiences”). Taylor is thus portrayed through a rotation of black women from the films of Oscar Micheaux and others. Far from disorienting, this approach underlines the film’s core message: Recy is one person, but her story is that of many. In Buirski’s hands, her story becomes one of both the history of sexual assault against black women and the essential role that black women have played in the civil rights battles of the past century. As an aesthetic decision, the race films lend the film a ghostly beauty. Recy Taylor thus hits the notes of an issue documentary, but unlike most it has a distinctive visual language to keep its images lingering in my head.

Buirski crafts a compelling case that the advocacy campaign following Recy’s assault marked the start of a proto Civil Rights Movement. Much of this hinges on the involvement of Rosa Parks, who worked with Recy to ensure her story stayed in the courts and on people’s minds. Buirski, as such, finds a through-line from Recy’s assault in 1944 all the way through the Montgomery bus boycott in 1955-56. The Rape of Recy Taylor chronicles an era of American history with which most of us are familiar, but it does so in a way that strips the period of its traditional hallmarks. By focusing on the advocacy efforts of women and visualizing their lives through race films, Buirski’s film allows us to see the Civil Rights Movement anew.

In very much a sign of the times, the Opening, Centerpiece, and Closing films at NYFF this year will all be released by Amazon — strange world we’re living in. The opening film, Last Flag Flying, is Richard Linklater’s adaptation of a 2005 novel of the same name and a quasi-sequel to Hal Ashby’s The Last Detail. Full disclosure: I haven’t read or seen either of these works. Perhaps it’s this ignorance, particularly of the Ashby film, that accounts for my relative love for the film among writers here at NYFF. Linklater’s road movie, for me, works as an adequate (if not revelatory) autopsy of the Iraq and Vietnam wars as well a vehicle for its strong leads and Linklater’s hangout-movie atmosphere.

Last Flag Flying charts the bumpy reunion between three Vietnam vets during the early days of the Iraq War. We have Sal (Bryan Cranston), a crass alcoholic who runs a dive bar; Doc (Steve Carell), a widower consumed by intense grief; and Mueller (Laurence Fishburne), a former wild man turned preacher. Much of the film consists of these three giving each other shit about how much they’ve changed (or haven’t) since their days in Vietnam. Doc, reeling from news that his son died while serving in Iraq, enlists the two men to help him bury his only child.

Similar to last year’s Everybody Wants Some!!, Last Flag Flying begins as a one-dimensional buddy movie and gains nuance and warmth as it unfolds. There’s no escaping that the characters here are sketched awfully broad. In the early going, Cranston plays a figurative floating devil on Carell’s shoulder to Fishburne’s angel. The two repeat their worldviews – essentially, “Find God!” vs. “Fuck God!” – ad nauseum to a battered, sunken Carell. Their cartoonish contrast, tiresome from the jump, fades as the leads are allowed to relax and shoot the shit as characters are wont to do in a Linklater film. After the initial scene-setting, Linklater and co-writer Darryl Ponicsan let their leads make dad jokes, tell ’Nam stories and fumble with new technology like true-blue baby boomers. Their humanity emerges, and with that their quips become funnier, their emotions truer. Linklater’s unhurried pace and comedy chops, as with his last year’s bro-down, ease us into the lives of characters we might otherwise finding off-putting.

Last Flag Flying tackles the legacies of Iraq and Vietnam in a way that erodes any red state/blue state divide. Much of the film seems envisioned as a response to the ban on photographs of military coffins during the Iraq War. Many have long argued that this policy shielded the human cost of the wars in Iraq and Afghanistan. Linklater’s film relishes in the images we weren’t allowed to see in 2003: flag-draped coffins, dead bodies in transit, grieving parents. A war movie with no combat, the film is all human cost. Last Flag Flying is the type of movie whose TV spots will intone things like “Every once in a while, a film comes along with the power to heal America.” This film won’t heal America, but my guess is most will find it a welcome tonic. At once deeply patriotic and skeptical of military intervention, the film will likely offend only the most hawkish neocons. Everyone else – the reasonable among us – will find an endearing portrait of a nation in mourning.