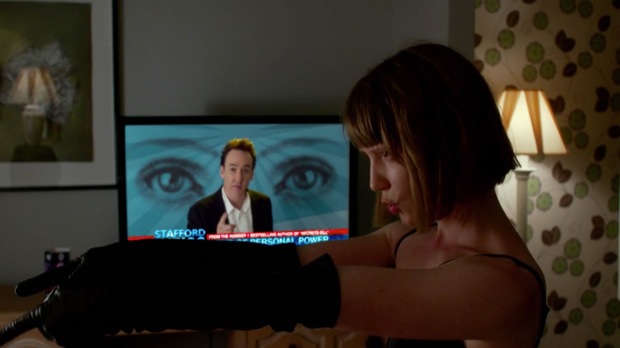 That’s Cannes, man. The red carpet’s rolled and stashed; you don’t have to go home but you can’t afford to stay here. Turkish auteur Nuri Bilge Ceylan’s three-hour-plus, mixed-reviewed Winter Sleep pocketed the Palme d’Or. Sorry, Naomi Kawase with your so-called “masterpiece” and Xavier Dolan, who said he “deserved” to win top honors, juries are subjective. The more burning issue is when undistributed landmarks like Adieu Au Langage and The Tribe will find their way to your eyes and ears. Until my final take on the 2014 edition of Cannes appears in the next issue of Filmmaker, here are my remaining favorites from the festival.

Already misunderstood as démodé showbiz satire, David Cronenberg’s viciously funny Maps to the Stars (the Canadian master’s first feature to be filmed in the US) plays stronger as a volatile comic nightmare of Hollywood ego, insecurity, and starfucking despair. True, the macabre screenplay by Bruce Wagner (Wild Palms, Scenes From the Class Struggle in Beverly Hills) shares a toxic bloodline with the self-aware status seekers of The Player, but Cronenberg’s impish ability to clinically flatten irony brings a disturbing matter-of-factness to supernatural guilt trips and more than one count of incest. Fresh off the bus to Tinseltown, black-gloved fawn Agatha (Mia Wasikowska, an edgy combo of enigmatic naïveté and obsessive calculation) chattily announces to a wannabe actor and limo driver (Robert Pattinson, in an inversely cast gag on his role in Cronenberg’s Cosmopolis) that, through Twitter, she knows Carrie Fisher — who cameos as both herself and a cheeky stand-in for troubled parent-child relations.

“Everything is stunt casting,” sighs Agatha’s new boss Havana Segrand, who might seem the prototypically fading, wailing, clinging starlet if not for the dignity of a corrosively commanding Julianne Moore, deserved winner of the Best Actress jury prize. In fractured vignettes of amorality largely triumphing over the human spirit, these burlesque mutants — including a repugnant, ruthlessly savvy, sure-to-be-doomed tween star (an impressive, Bieber-esque Evan Bird), his TV self-help guru father (John Cusack) and manager-mom (Olivia Williams) — flap around like fish run out of water, exchanging cruel barbs and far worse. In their superficial minds, they’re enlightened beings instead of pathetic victims of their own making, but it’s okay to laugh (and you will!) because they aren’t real people, merely actors.

Female rivalry, performance anxiety, and art-versus-commerce are also on French auteur Olivier Assayas’ mind in his brainy, beautiful, quietly seductive Clouds of Sils Maria, even if aging actress Maria Enders (Juliette Binoche) would never refer to her young assistant Valentine (Kristen Stewart) as a “chore whore,” as in Cronenberg’s film. Blending the movie-insider dizziness of his Irma Vep with the stately reserve of more recent hit Summer Hours, Assayas’ melancholic, meandering meta-puzzler begins on a train to Zurich, as Val fields calls and preps her boss’ itinerary while the Binoche-caliber Maria attempts to write a speech honoring the German playwright who, two decades earlier, launched her career as an ingénue. Meanwhile, that original play — a psychosexual two-hander about an older professional who becomes tragically dependent on her youthful protégée — is to be revived, with Maria resentfully accepting the senior persona in a funhouse mirror of uncomfortably shifting generational dynamics.

When Maria and Val run lines together in a Swiss chalet, it’s unclear at times if their increasing friction is dialogue or “dialogue.” The playwright could be a stand-in for Bergman, whom Assayas wrote a book about; Binoche broke out young in 1985’s Rendezvous, written by Assayas; Twilight star K-Stew, the real star of this show, snarkily disparages a blockbuster script involving werewolves. There’s a theoretical specificity to why Assayas peppers his scenes with iPhone thumb swipes, Skype calls, Google Image searches, and immortalized YouTube paparazzi clips of Maria’s outspoken wild-child costar Jo-Ann (Chloë Grace Moretz, chewing it up in full Lohan mode). Like the serpent-like “Maloja Snake” cloud formation that gives the play-within-a-film its title, time slinks away without pause, but modernity is a variable/culture/outlook that can only be grappled with in the present. Enjoy your summer of superheroes, kids.

Three-time Critics’ Week winner and hands-down my favorite film of Cannes 2014, Ukrainian first-timer Myroslav Slaboshpytskiy’s The Tribe grabbed me by the throat and threw an exhilarating and deeply strange punch to the face. Set in a deceptively genial boarding school for deaf-mutes (played entirely by deaf non-professionals, mostly street kids) that makes If… look like a John Hughes weekend detention, the entire feature is in sign language, with neither voiceovers nor subtitles. Not that translation is needed with such visceral storytelling and characters so physically animated that you can perceive behavior and tonal inflection with every slap of their signing hands. New pupil Sergey (Grigory Fesenko) arrives, acclimates and ascends quickly within a sinister hierarchy of ritualistic afterschool criminals, but we’re not talking mere bullying; once Sergey is jumped in before a couple dozen peers, he’s sucked into a droog-like network of brutes, thieves and pimps who sell off their own female students (Yana Novikova, Rosa Babiy) to the nearby truck stop for a few minutes of the ol’ in-out.

There’s palpable anger and sadness to the whole ultraviolent, hypersexual affair, especially after Sergey starts using his scratch to pay for one of the prostitutes, then falls for her, knocks her up; let’s just say that hearing a young woman’s voice for the first time during an illegal, low-rent abortion is an unusually distressing sensation. Sound in general is key to Slaboshpytskiy’s tension and atmospheric rigor (as is his ever-present Steadicam, which adds a refined sense of choreography, rhythm, and a splendid array of tracking shots and long-shot tableaux), the hyper-realistic soundtrack as stylized as Jacques Tati’s observational, dialogue-light comedies. Here, however, the genre is more aggressively art-punk. It’s a silent movie that screams.

Please call it a caveat, not a copout: I’ll probably need multiple viewings to even begin to reckon with the fertile breadth of 83-year-old master Jean-Luc Godard’s poetic 3D provocation Adieu Au Langage without embarrassing myself, but it’s the single film in the main Cannes competition I can’t stop thinking about. With rare exceptions from the late ’80s and beyond, my JLG vintage of choice would be the “early, funny ones,” and I admittedly walked out of his last feature at Cannes (2010’s Film Socialisme) because of his insulting prank of subtitling in broken “Navajo English.” That said, his short Les Trois Désastres segment from the 3D omnibus 3X3D was headier and more thrilling than half the films I saw at Cannes last year, so my expectations were high but exceeded in this densely analytical yet undeniably breezy dissertation on How We Live Today. My notes are a scribble of references (Aleksandr Solzhenitsyn gets Googled, Rodin on the toilet, TV pioneer Vladimir Zworykin, the number 133501?) and technical descriptions, but here’s the plotted known amidst granulated digital textures, war footage and old movie clips: an adulterous couple (Kamel Abdelli and Héloise Godet) philosophizes about art, politics and themselves, often while lounging in the nude, but the real protagonist may be Roxy Miéville (Godard’s dog), who communes with nature.

Farewell to language — at least as we knew it, arf! — but for humans or cinema? iPhones are passed back and forth in lieu of conversing, ringtones erupt at the edge of hearing (making audience members swivel in confusion), and the multiplex gimmick of trois dimensions is used not to toss projectiles but to challenge our optics (a chain link fence is flush with the screen except for fingers hanging onto it the foreground, the people and everything else in the extreme background constituting the 3D effect; a pier post sits in extreme close-up next to our pupils while a steamboat drifts behind). At one point, with a jerry-rigged totem of SLR cameras, a panning shot tracks a man walking away from a woman, except we still see her in a static shot as a separate 3D layer; he walks back, the two planes become one again, and the crowd breaks out in applause. An 83-year-old master invents a brand new shot in cinema, and that’s a reality (metaphor? worldview? joke? Help!) worth expounding upon, if we’re ever given the chance to converse with this film again. For now, adieu!