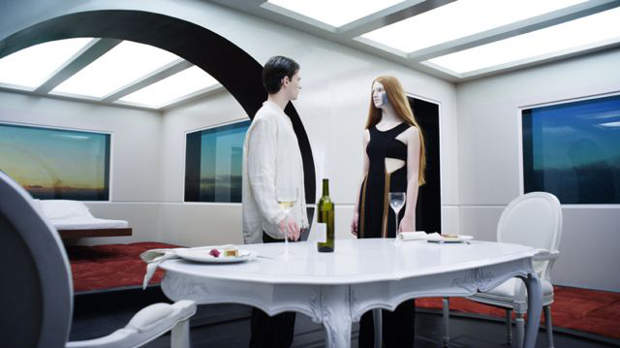 Dan Ouellette has had a long career in the New York independent film community, starting with his work as a production designer for Hal Hartley in 1990 with Trust and then, in 1992, with Simple Men. He’s also an accomplished visual artist (examples of which can be seen at his Neurotica Divine site) and has directed stylish music videos for the bands Android Lust and The Birthday Massacre. Dan is also, full disclosure, an old friend who I’ve also worked with professionally many times. (Films he’s production designed that Robin O’Hara and I produced include What Happened Was…, Saving Face, and Joe the King.) So, I’ve observed Dan as he’s developed several possible projects for his own directorial debut. One of those projects — typically for Dan, the most ambitious of the lot – consumed him over the last year and just premiered at the Sitges Film Festival. Titled Dreams of a Petrified Head, the short is a piece of philosophical science fiction exploring themes of memory, ideology and relationship dynamics. The film’s ideas are bold, its production design typically elegant, and the performances are precisely controlled and with a repressed quality that hints at the film’s grander statement.

Here’s how Ouellette describes the short on the film’s blog:

Amanda Sage was a dissident whose beliefs and ideas retain the power to disturb a long established mode of living. A restless public is re-awakening long after her death fueled by the recordings of her anti-government speeches. Jeremy’s new job entails rewriting her words and her visual image; nullifying and softening the impact of her heartfelt rhetoric. While working to comprehend her lectures, to effectively alter them, he chooses a taboo course of action; he dumps her stored memory into an android body made in her likeness. This brings him dangerously close to her and her message.

I spoke to Dan before his Sitges premiere about his influences, the challenges of making smart, visually elaborate science-fiction on a budget, and working with Stoya. (And check out the film’s trailer below.)

FILMMAKER: Let me start by asking, how would you describe your film to our readers?

DAN OUELLETTE: I guess I would describe it as a one-act play cerebral science-fiction film. I mean, my challenge was to write something set in one room that had a dramatic arc because of the limitations of not being able to do a more elaborate science fiction set on the money that we had. So, yeah, cerebral sci-fi, I guess, is the unfortunate tag.

FILMMAKER: You and I have known each other for a long time, and I know that you’ve had different projects you’ve worked on over the years — both shorts and features. What was it about this one that clicked so you were able to make it?

OUELLETTE: After doing four heavily stylized visual music videos, I had been writing a lot of horror scripts. There were a lot things I was interested in making, but none of them had the strong visual element I considered my strong suit as a production designer and an artist. I had always put off science fiction specifically because the challenge of doing science fiction on a shoestring is forbidding. And so, I never really ventured into that genre with my writing until I wrote this script. The seeds of this idea had been sitting with me for a long time — for about four years prior to writing the script. I was making a submission to [the ITVS series] Future States, and this idea sort of popped up in my head. The DP who shot this had shot something previously for Future States, and he made the suggestion to me because we were talking about doing a project together. I thought of this idea and I immediately sat down and I wrote it in about three days. I think the source for it came more from J.G. Ballard, his type of science fiction, than anything else. It’s not typical science fiction, I guess.

FILMMAKER: What elements of Ballard were you sort of echoing in the piece?

OUELLETTE: What I like about Ballard is the sense of a kind of forgotten future. Instead of the frantic, frenetic science fiction future that we’re so used to, I wanted to do something that was rather languid, something that had empty spaces. Almost a kind of science fiction of longing, I guess, would be the best way to describe it. I’ve always felt that Ballard’s writing had that. Even though there was science fiction there, it was always set in a very strange environment that was both familiar and unfamiliar, and with almost none of the standard sci-fi trappings. So that’s what I set out to do, combined with trying to write a one-act play set in one room, which is a formidable challenge. [Laughs]

FILMMAKER: This is a super ambitious short for whatever the resources you had for it. What were some of the challenges? It has always seemed to me that you like to take on pieces that have enormous challenges in terms of their realization. Was that the case in this film?

OUELLETTE: That’s very much the case on this film, and I think the crew would agree.The crew gave that assessment, and I think that’s also the case with the music videos that I’ve done previous to this. It’s not interesting to me, both in my fine art and in my filmmaking, unless there’s a sufficient challenge. The fact that it was science fiction was already a challenge, but what also happened was that once we were committed to making this, there was literally an avalanche of visual ideas that came to me that had been lying in wait and that I wanted to explore. And so, what was essentially set in one room became three rooms, an entire, quite large apartment. So, as it grew, the challenge became, can we still do this? I employed a sort of simple concept, which was, well, all of this already exists in New York in one way or another. So, we set about collecting set pieces that were being thrown out. You know, I have connections with construction supervisors, and I contacted them and said, “What are you working on and what is being thrown into a dumpster?” I would say about 95 percent of the materials in the film are materials recycled from productions in New York. That’s what made it feasible.

OUELLETTE: Flats and materials. The windows are all a half inch thick, four by eight Plexiglas, each of which costs $400. I could never afford that. [We got] six of those, which were going to be thrown out. We stored [these materials] for about eight months until we were ready to move them to the studio to make the set.

FILMMAKER: What about the FX work?

OUELLETTE: There is some FX work — about 280 special effects shots in the movie. We were lucky to connect with a post FX company in Brooklyn, Crux Studios, who took on the task. From my own experience working with computer design an Illustrator, I was able to lay out and prep the interface designs before they were given to the post FX company. And even though I wasn’t 100 percent sure what I was doing, it turned out to be exactly what [the VFX artist] needed. Everything was arranged exactly the way he needed to go ahead and animate them, and he took on the process of bringing them to life, basically. But, the design aspect was something that I did myself to speed up the process. Also, keying in the green screen was an enormous amount of work, and we worked in 4K, which slowed things down. Gary Schwerzler did pretty much all of the keying. He provided all of the maps that Crux Studios needed to then lay in the backgrounds. All the windows in the set are essentially holographic screens, so the landscape keeps changing throughout the course of the movie.

FILMMAKER: Could you talk a little bit about what you were going for in terms of the actors and the performances?

OUELLETTE: It’s hard to talk about without giving too much of the narrative away, but I wanted the performances to fall in line with the overall aesthetic of the movie. And so, I directed the actors with a sense that we were almost in an otherworldly place [in an attempt] to disorient the audience. Again, it’s recognizable but unrecognizable. It seems common and ordinary on the surface, but as you watch the movie, hopefully you begin to question the ground under your feet. Where are we, exactly? That starts with the landscape shifting. Initially you think they’re actually in this place, and then you realize, no, these are all just holographic screens. I wanted to follow [this concept] through with the performances. I wanted characters to seem ordinary, but at the same time, I wanted them to seem heightened or questionable in what their motives were. And so, I worked with the actors to create a kind of tone. I needed a very repressed emotional performance from the two leads, and hopefully we succeeded at getting that.

FILMMAKER: How many days did you shoot?

OUELLETTE: We shot for six days, in August in the heat without air conditioning. [Laughs] FILMMAKER: How did Stoya become involved?

OUELLETTE: I knew Stoya from a photo shoot I had done with her. I photographed her for a series of photos for an art project involving masks. I had already intended to work with her, and in fact, I wrote a number of horror scripts specifically with her as the lead actress, and this seemed an appropriate project to work together on. So, I asked her and she said yes.

FILMMAKER: What do you hope this will lead to for you? Do you see this short as forming the basis for continued work in this genre of philosophical science fiction?

OUELLETTE: This was originally intended as a piece to raise money for a feature. And so, we’re currently in the process of collecting funds to do a feature version, which will either incorporate this short or leave this short alone entirely and create a feature narrative using some of its story elements in this. That’s already been written and we’re already looking for funds for that. In addition, I am talking to Stoya about a horror film that I wrote for her specifically. We’re trying to get that off the ground now as well.