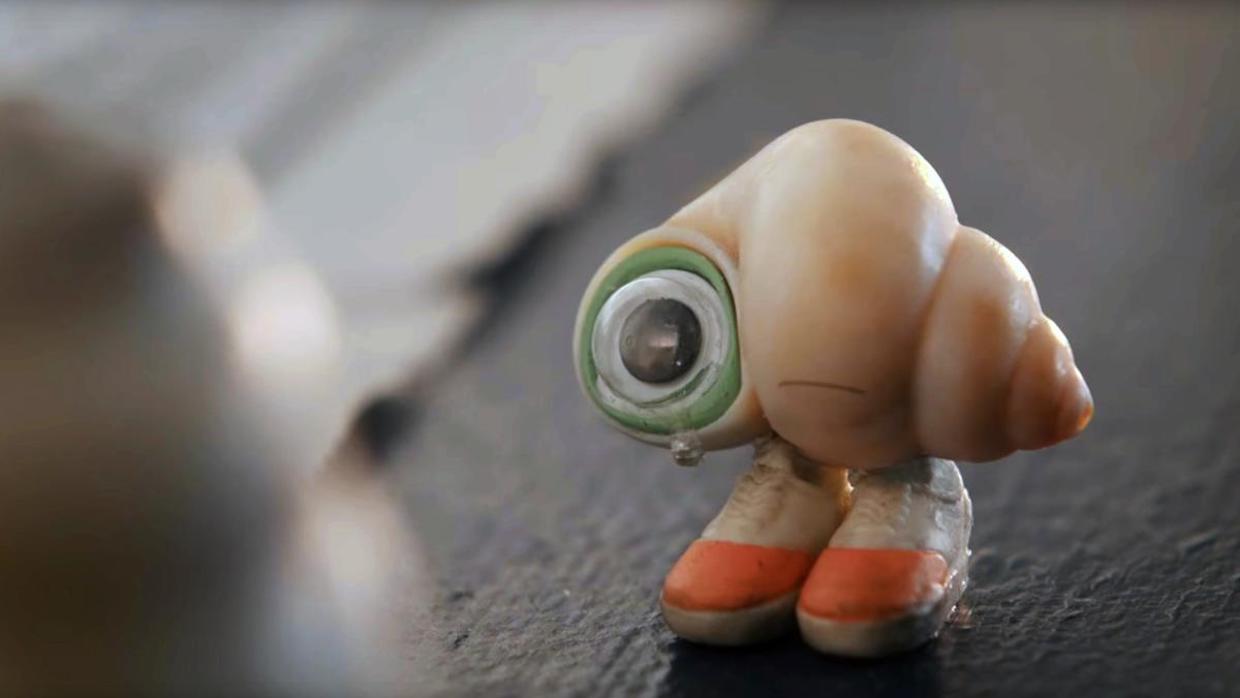 Jenny Slate provides the voice of Marcel the Shell

Several years back, Jenny Slate and Dean Fleischer-Camp traveled with friends to attend an out of town wedding. Opting to scrimp on lodging costs, the duo shared a crowded hotel room with four other friends. Slate just happened to be the only girl in the group, which led to her adopting a “teeny-tiny” voice to communicate her comparative petiteness to the other men in the room. The voice, a running joke for the rest of the weekend, became the eventual creative spark that would launch a web series, children’s books and feature-length film released by A24.

Soon thereafter, the first Marcel the Shell with Shoes On video was born, comprising three integral elements: Slate’s “teeny-tiny” voice, Fleischer-Camp’s joke writing and lo-fi stop-motion animation. Twelve years after the first short hit YouTube, Marcel the Shell with Shoes On became a fully-realized feature film, directed by Fleischer-Camp and co-written by him, Slate and Nick Paley. The principal comedy duo (and former spouses) were both in attendance at a roundtable discussion at this year’s Gotham Week entitled “Developing Your IP—Where to Go from Proof of Concept,” alongside the film’s producer Elisabeth Holm and animation director Kirsten Lepore, with the conversation moderated by filmmaker and academic Susanna Styron.

The resulting feature takes a charmingly meta approach, following a recently-divorced filmmaker named Dean (Fleischer-Camp) who temporarily moves into an Airbnb while piecing his life back together. He discovers that Marcel (Slate) and his Nanna Connie (Isabella Rossellini), two impossibly tiny mollusk creatures, also live in the residence, left behind after previous owners Mark and Larissa broke up: In the midst of their relationship-ending argument, Mark hastily packed up his sock drawer, accidentally scooping up the rest of Marcel and Connie’s family in the process. Moved by the shell’s cause, Dean decides to film Marcel, uploading the resulting video to YouTube. Of course, it swiftly goes viral. Aided by Dean, 60 Minutes and the internet, Marcel embarks on a dogged search for his family, in the hopes of reuniting with them before Connie succumbs to dementia and old age.

Slate and Fleischer-Camp offered insight into the expedited “genesis” of the first Marcel short back in 2010, which was written, recorded and animated within a mere 48-hour window. Though Slate is effectively Marcel in voice and spirit, she notes that it’s Fleischer-Camp’s humorous musings in the script that truly embody who Marcel is. “I’m not a great joke writer,” she admits. “I wouldn’t think of, ‘Guess what I use as a pen? A pen, but it takes a whole family.’ I would be thinking of Marcel’s weird feelings instead.” In retrospect, Fleischer-Camp feels that the first short’s approach to stop-motion is glaringly amateurish. “I’m not a trained animator and I didn’t know what I was doing at all,” he laughs. Nonetheless, the quirky, quickly-made short made its way to the Sundance Film Festival in 2011.

This is where Fleischer-Camp met Lepore, with the two quickly bonding over their mutual preferences as they pertain to animation. “We hated the same things about stop-motion,” he said. The two felt that this particular animation style was becoming too polished and effectively soulless, as opposed to embracing the mistakes inherent to the meticulous craft. It would be many years until Lepore received a call from Holm asking her to join the Marcel movie as its animation director, but she was already well-aware of the minuscule character: “Of course I was aware of the original Marcel short. Who wasn’t?”

For those who missed out on the buzz from the original short, the Shell himself would continue to make his stamp on the cultural zeitgeist. Two more shorts were made and posted on YouTube—in 2011 and 2014, respectively—and he translated well to a 2D landscape, as well. Slate and Fleischer-Camp repurposed the Marcel sequel shorts into children’s books, which expanded the shell’s reach to an entirely new demographic. “Not to be farty about it, but I consider Marcel the Shell fine art,” said Slate with a chuckle. “We wanted children to have access to fine art. It’s not just for old dudes.”

It wasn’t until 2014, when Slate starred in Gillian Robespierre’s Obvious Child, that Holm became interested in the concept as a potential feature film. While producing that film, she had dinner with Slate and Fleischer-Camp in order to hear about their budding vision for the film and remembers being struck by the “idiosyncratic, authentic texture” of all of the voices involved—including Marcel’s. As opposed to seeing this as an opportunity to “cash into IP,” it was critical for Holm and the team to “not just take a nice development check, but preserve what is nice and special and cool about this.”

More than anything else, over a decade’s worth of patience and conscious preservation of artistic integrity allowed the team to make Marcel the Shell into a beloved character, nurturing his development the same way you would a precocious child. By making one-off shorts and children’s books for many years, the team was effectively able to gauge just how enduringly impactful the character they crafted remained among an audience. “Making those extensions of the character, of the IP, was good for us,” said Slate. However, she was careful not to broadly endorse the practice among all attendees: “Everybody really is different and it depends on what you want. But, looking back, I don’t have any regrets about it.”